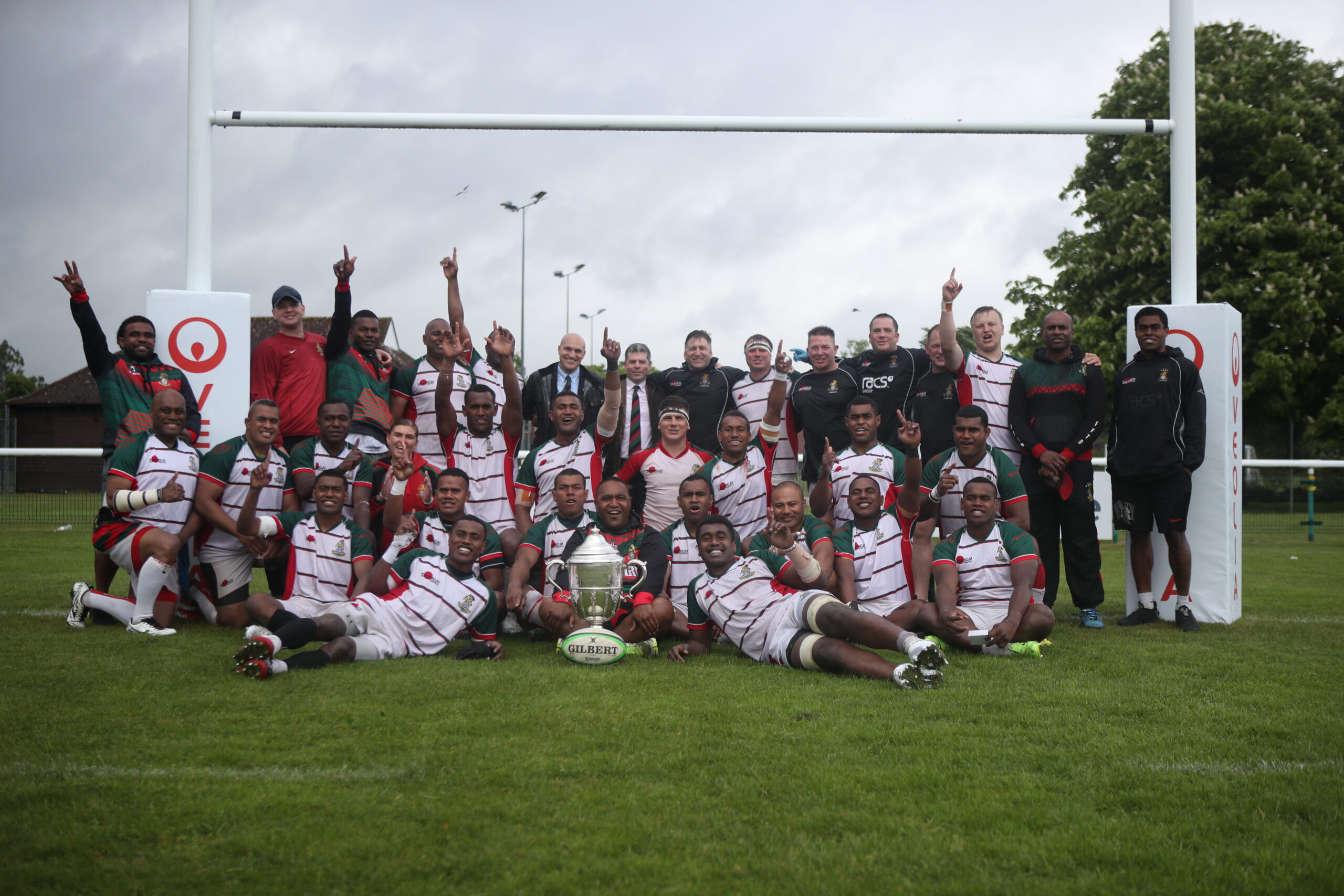 By Kimberley FowkeMay 12, 2022No Comments

The Army Rugby Union community finals showcase took place in Aldershot this week.  This was the first season where the Finals had been moved from their previous traditional slot in the calendar in March to mid May, following the Inter Services to allow Representative rugby to focus on their preparations.

Some may have thought the later play on date would have brought with it warmer weather ideal for running rugby but the Universe had other ideas with wind and rain that would have been more suited to a mid October.

A total of 7 finals took place with Units travelling from across the country to compete for the silverware for their respective Leagues.  Unit operations and commitments are busier than ever and it is testament to the Community Competition Chair, Maj Andy Bennett and his committee and Commanding Officers, Rugby Officers, Coaches and players to get the pool matches played throughout the season to result in the Finals day showcase. 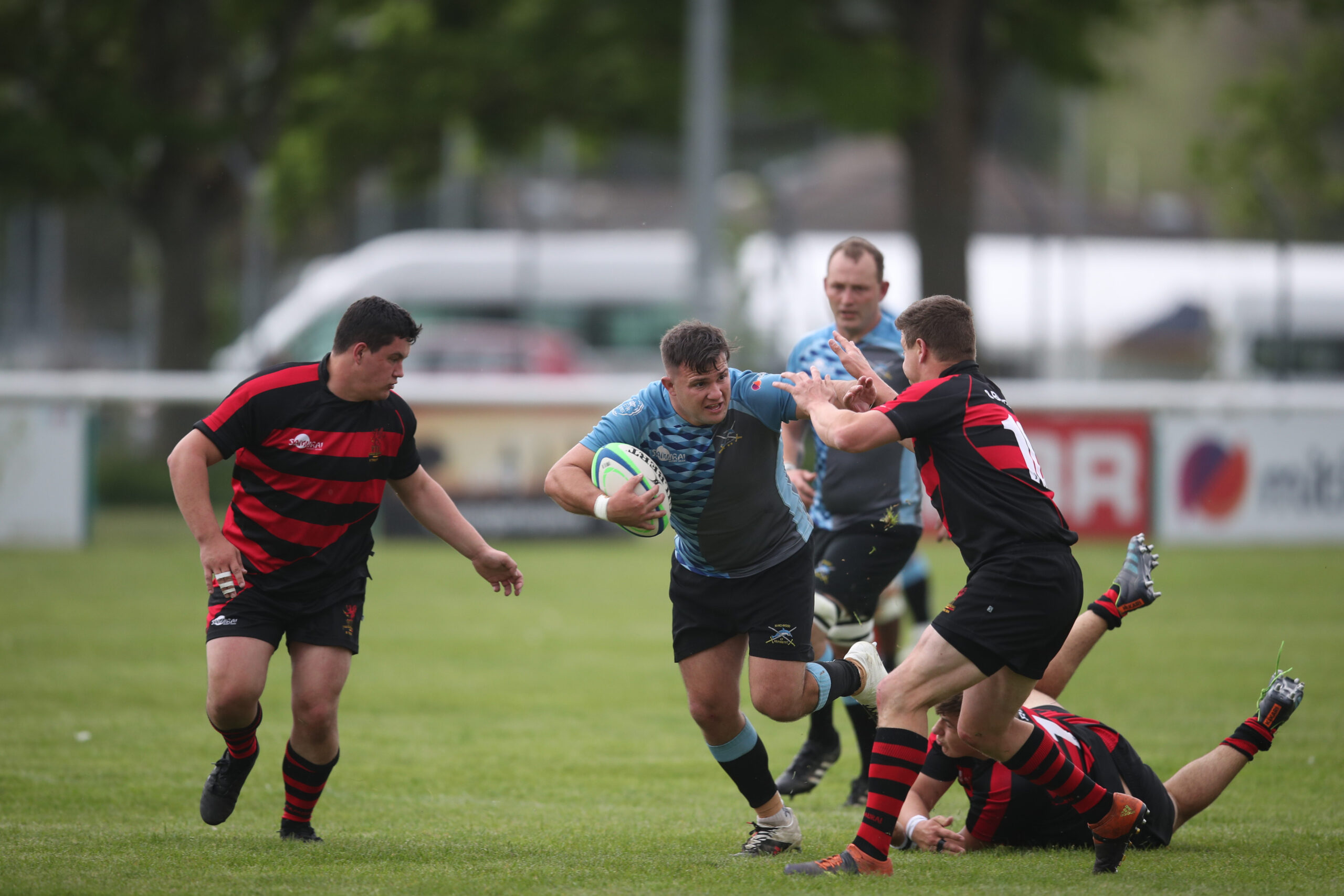 Following the semi final results from the previous week, the Premiership Shield was contested between 17 Port & Maritime Regiment RLC and 8 Trg Bn REME.  It was the Marchwood Dolphins that started the sprightlier of the two sides, with slick handling through some nice phases of running rugby seeing them score four try’s in the first half to lead 24-7 at the break, 8 Trg Bn scoring one of their own just before time to get them on the scoreboard.

Many in the crowd at the beginning of the match had anticipated a good contest and if the scoreboard seemed a little one sided at the break it probably wasn’t a fair reflection of the competition on the pitch.  8 Trg Bn came out of the changing rooms raring to go for the second half and looked determined to give the Dolphins a run for their money in whose name would be being engraved on the silverware.  For large phases of the half they had the Dolphins defence under pressure, sustained territory and possession saw them deservedly score another two try’s, one converted, to bring them within 5.  The final word however went to the Dolpins who added a final try to secure the victory and with it the ARU Premiership Shield for the 2021-22 season. 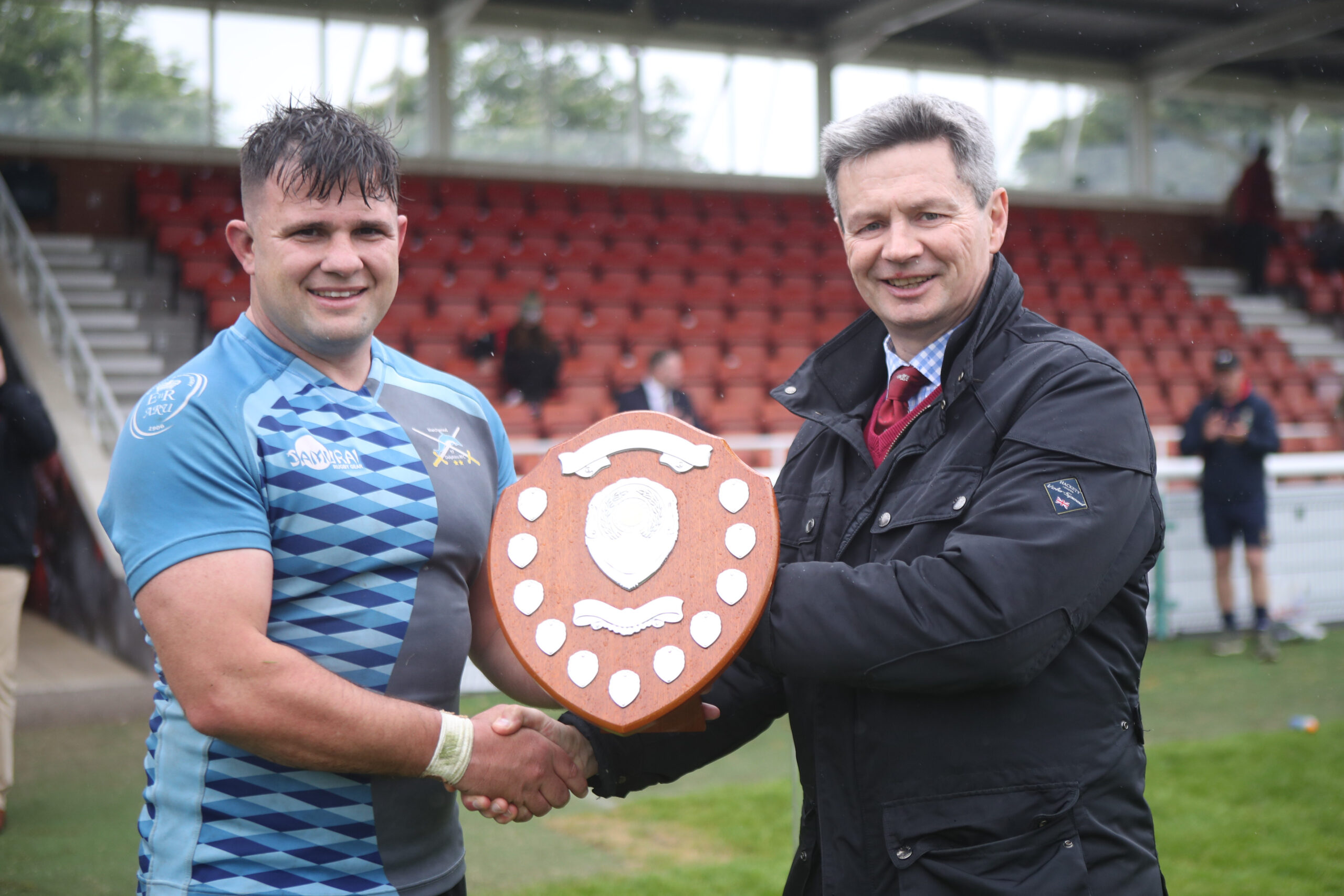 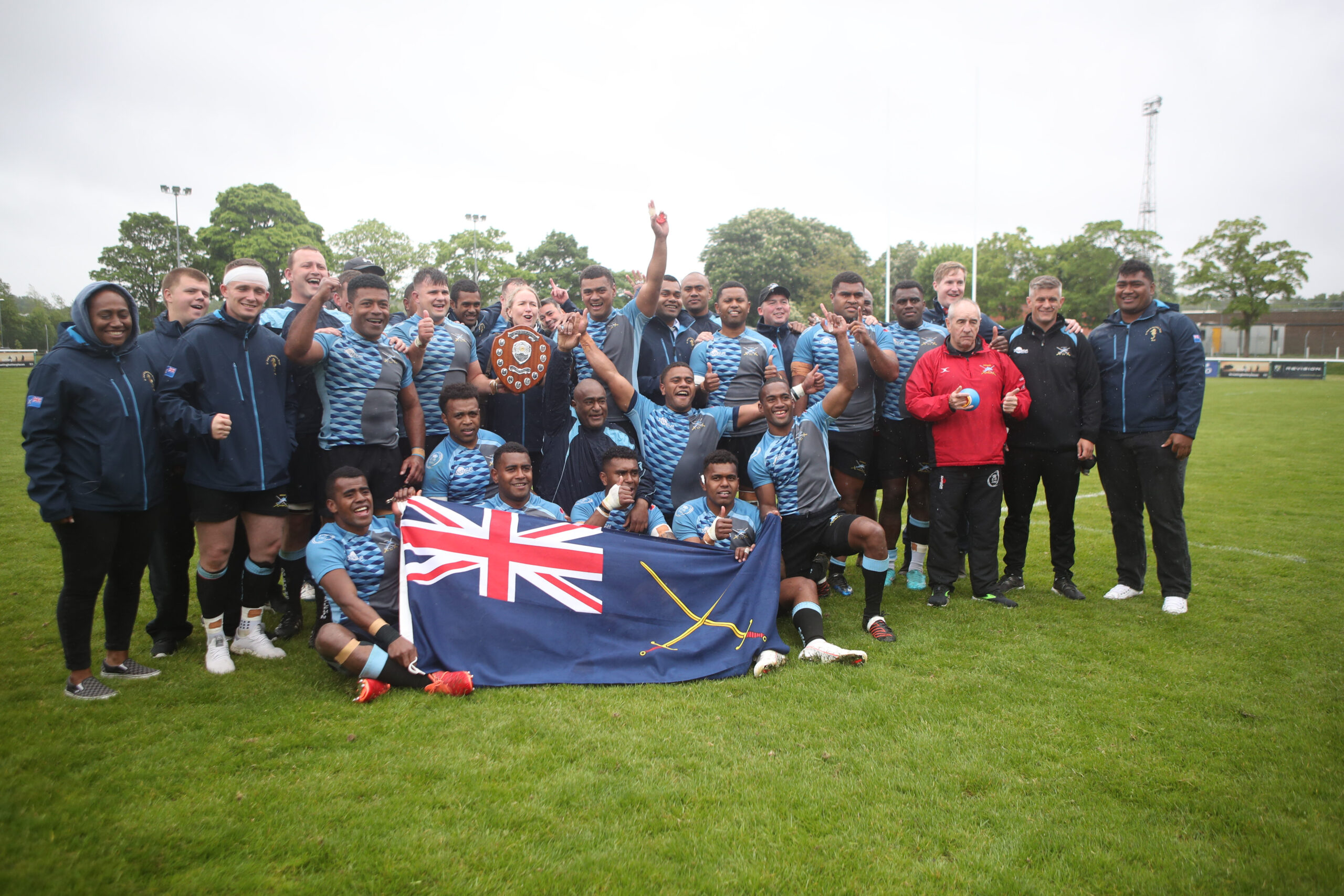 Two giants of Army Unit Rugby went head to head in the show piece of the Community competition to decide whose name would be added to the historic Army Premiership Cup, which was donated by the RFU in 1907.

The weather had set in and the match was played in strong winds and constant drizzle making conditions for an anticipated running rugby difficult.  The Yorks extended an early 9-0 lead through the reliable boot of Lt Smart.  The damp conditions inevitably leading to handling errors, neither team were able to execute phase play through the back lines and upfront the packs were fairly evenly matched.  A break just before half time down the touchline saw the 12 Regt winger cross for an unconverted try to keep them in close range with the Yorkshire men who lead 12-5 thanks to another penalty from the boot of Smart. 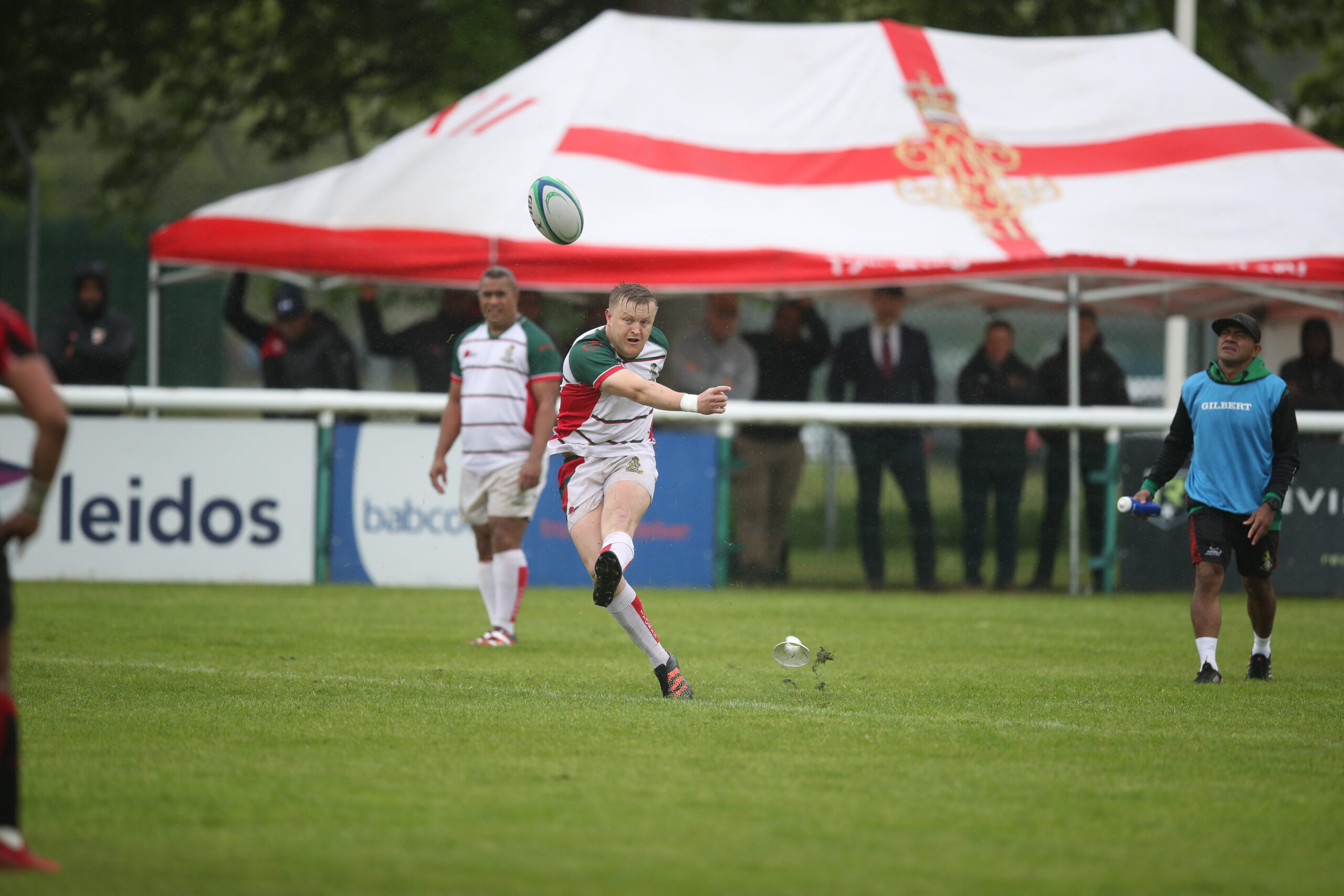 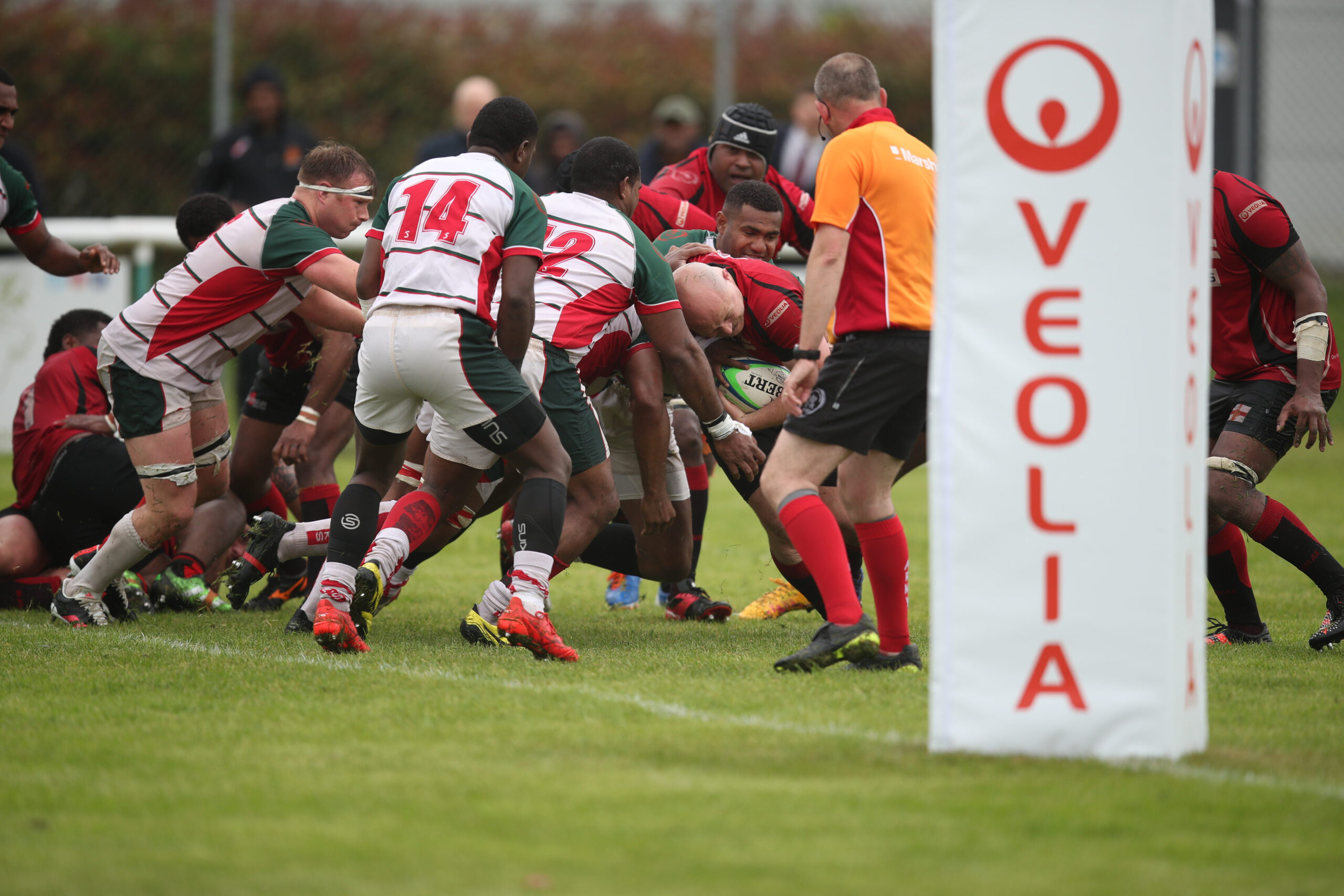 Similarly to the Premiership Shield final earlier in the day, it was the underdog on the scoreboard that came out firing with a drive over try from the forward pack, unconverted, to make the score 12-10.  Back came the Yorks with a break through mid field in the Gunners 22 for flanker, LCpl Ratukadreu to cross under the posts making the conversion a formality for Lt Smart, 19-10.  A cracking start to the second half, more to follow, the weather had other ideas.  A period of stalemate ensued before the power of 12 regt pack drove them over for another try from close range off a line out, a beautiful conversion from just inside the touchline against a swirling win made it a two point game, 19-17.  The Yorks pack responded and were applying pressure to the Gunner’s defence within their 22 looking likely to cross for another of their own but it wasn’t to be as the referee called time and the rest as they say is history. 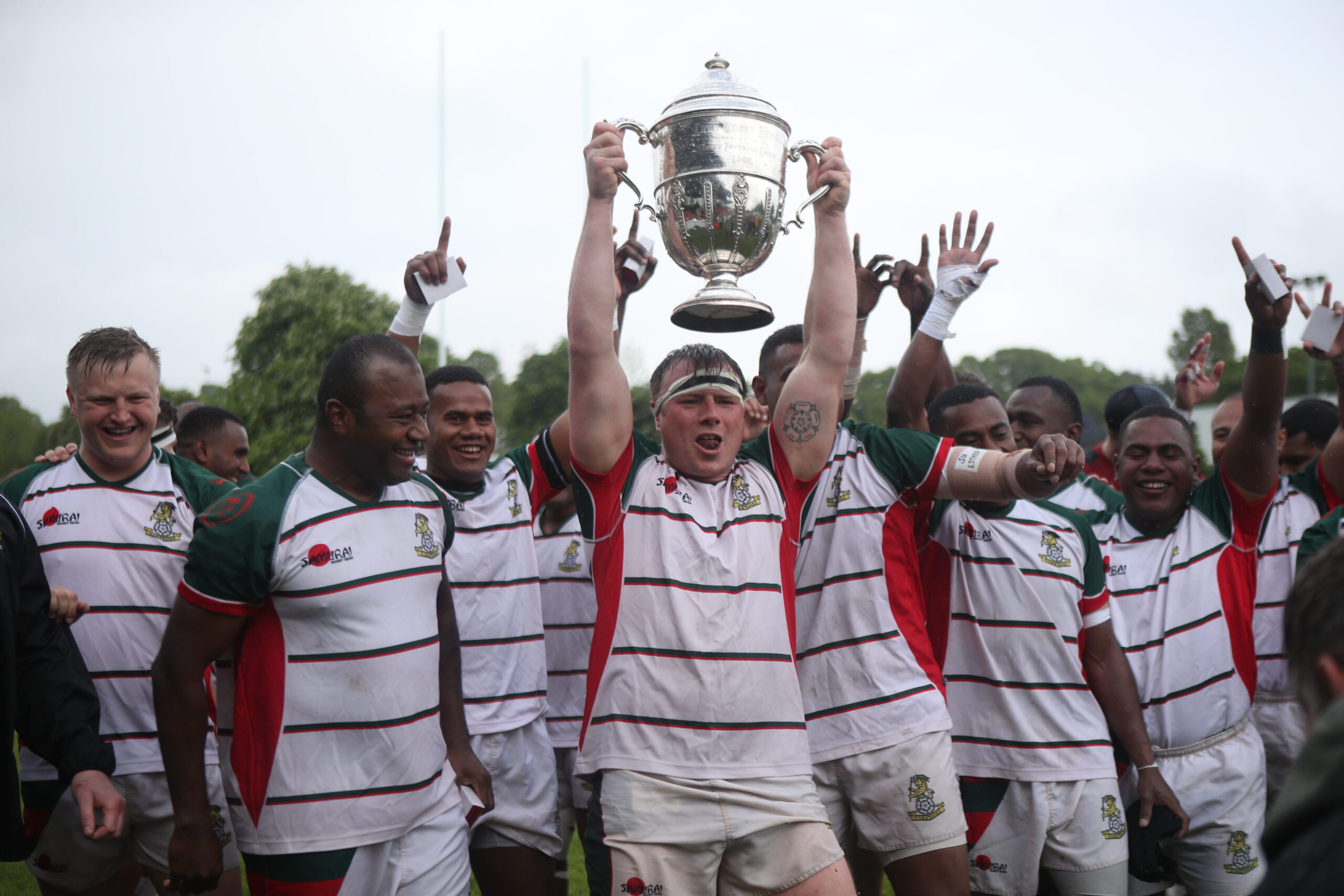 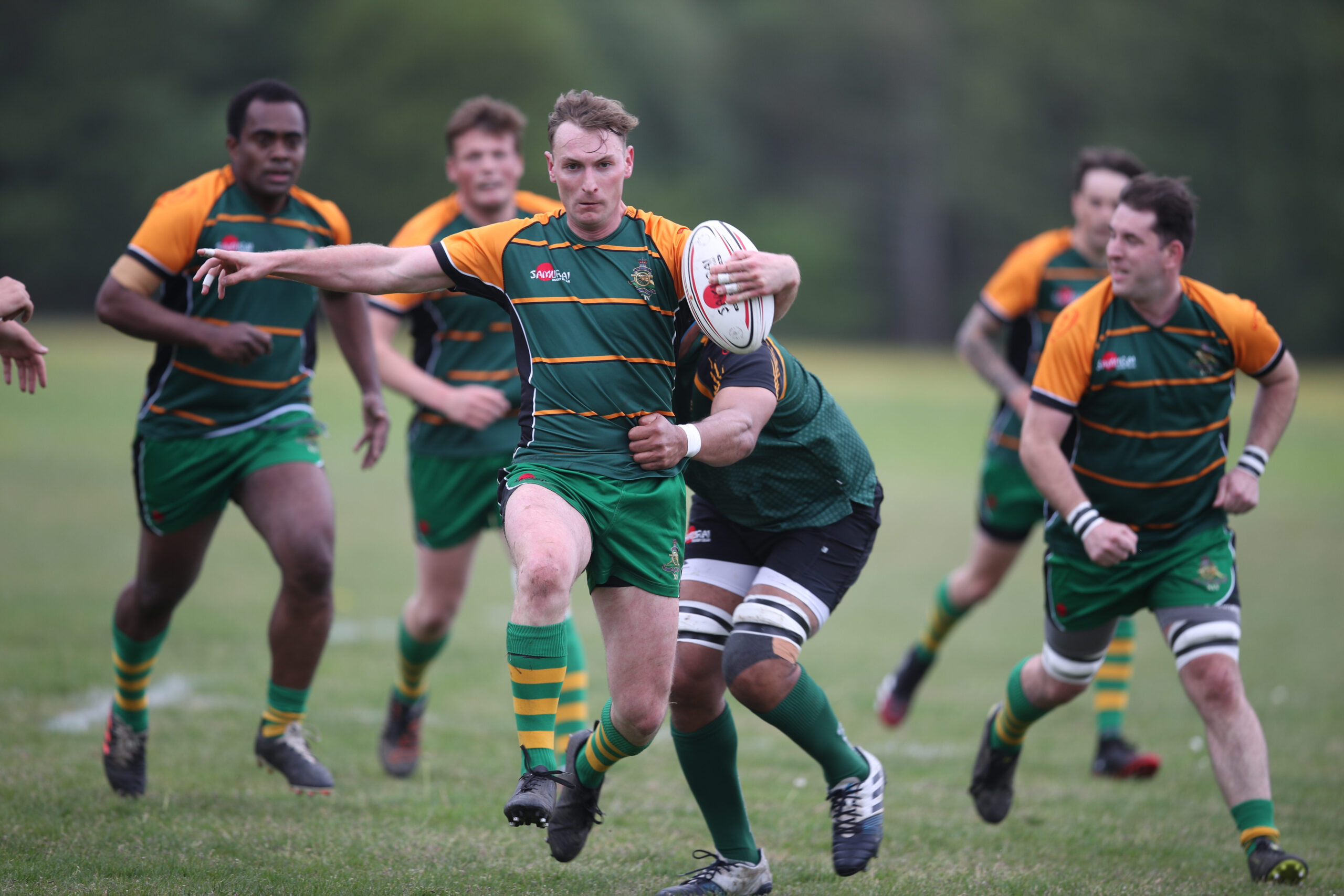 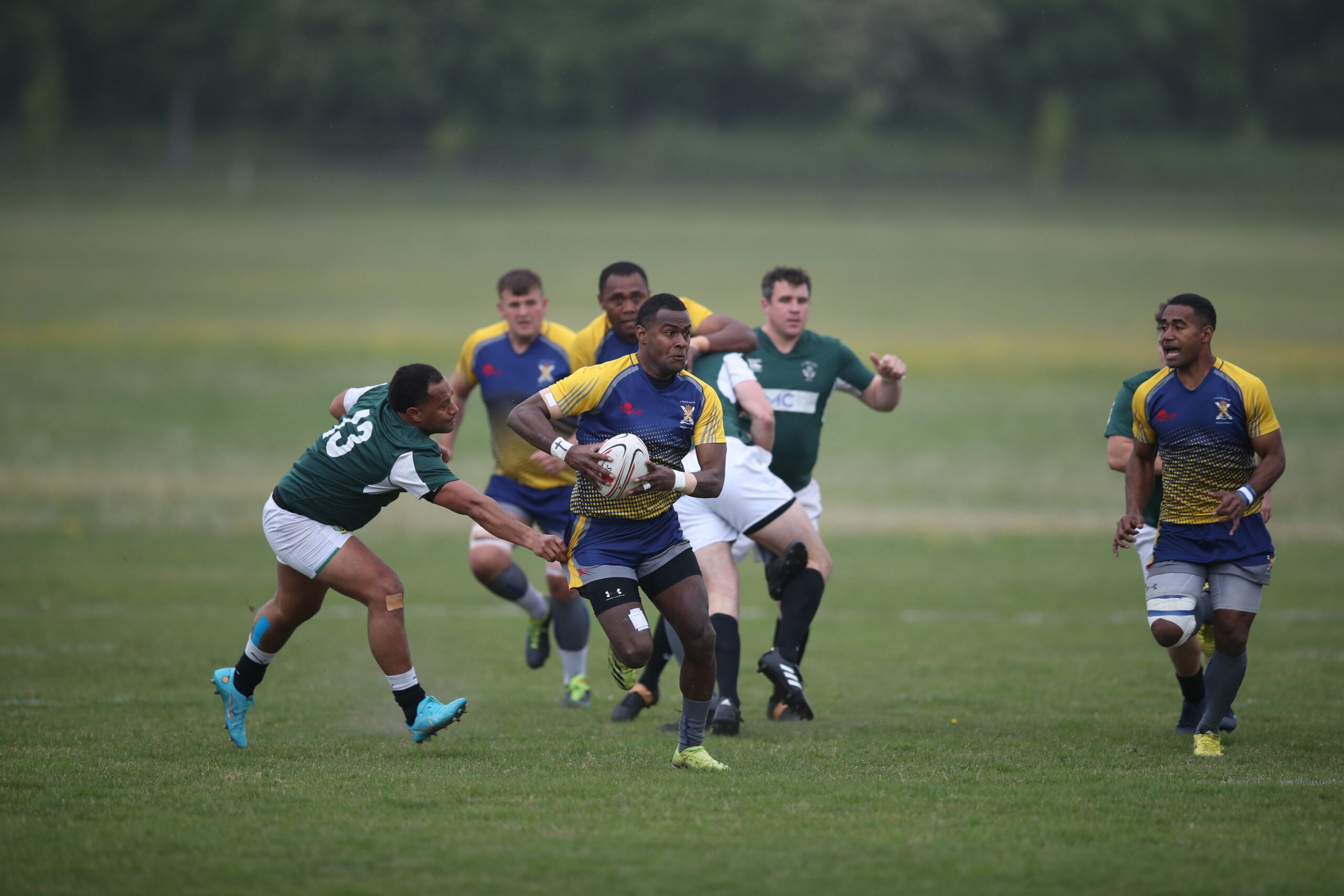 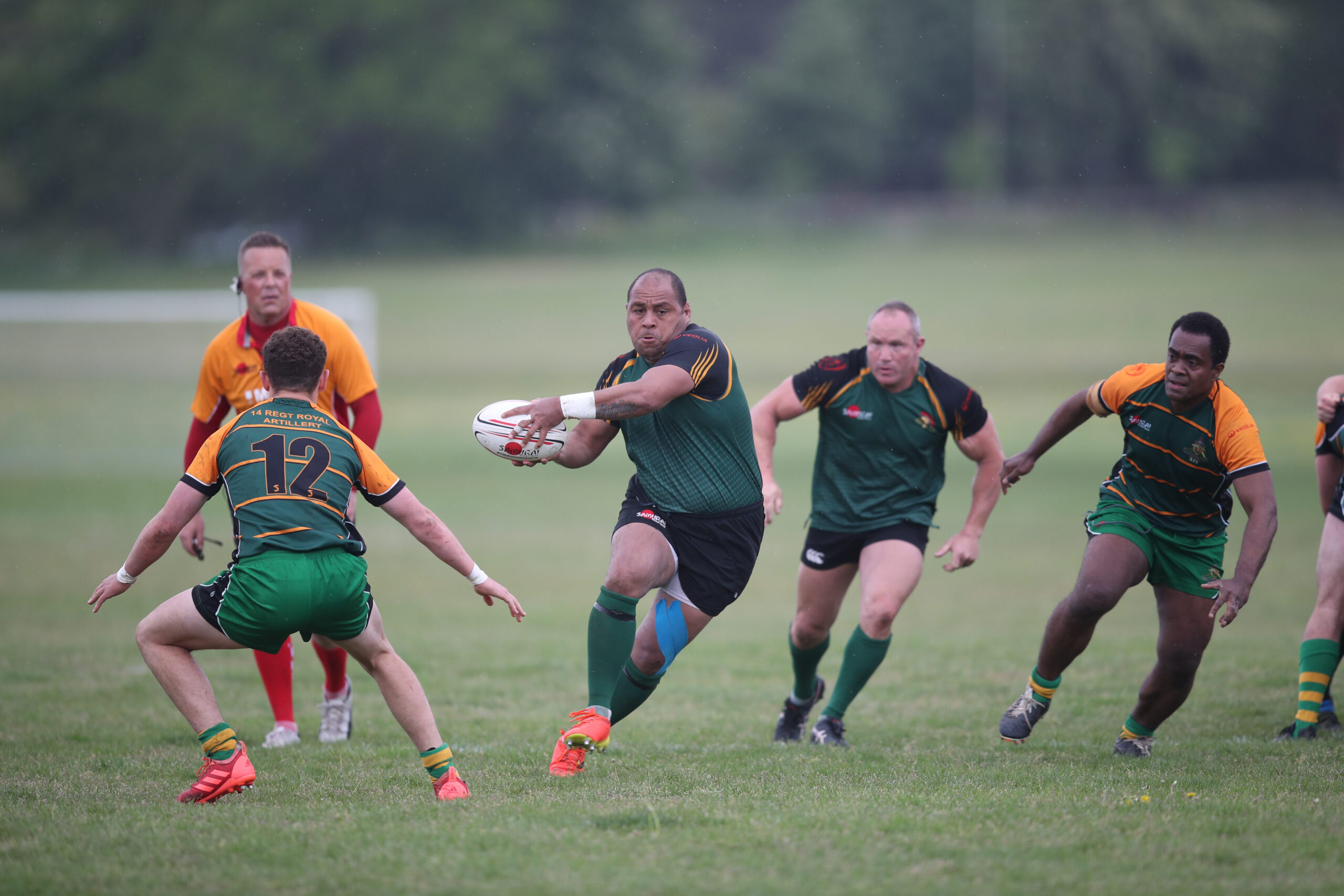