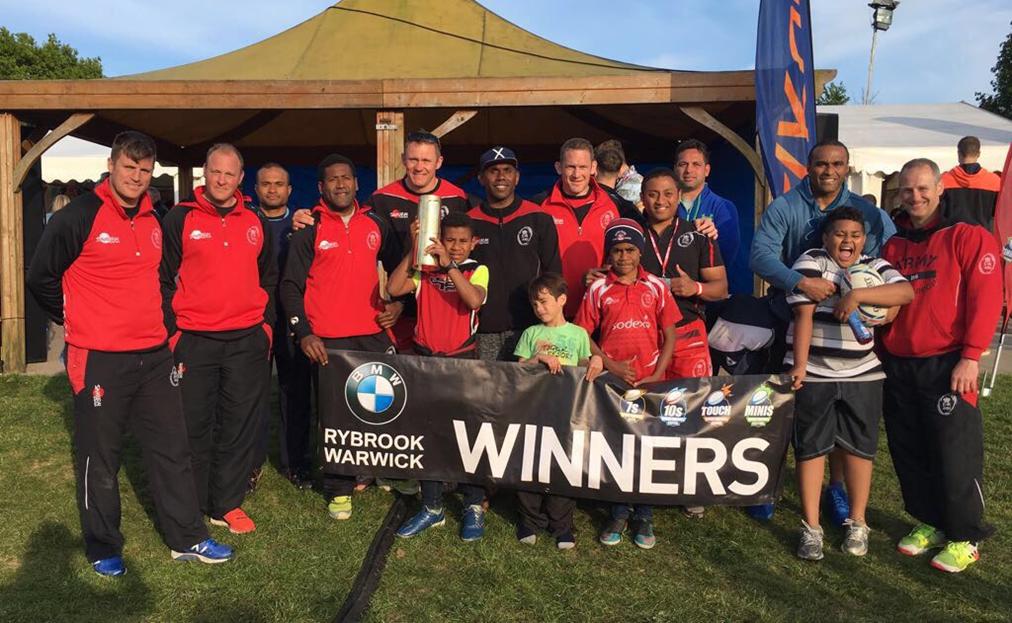 The Army Masters gained an invitation to the Rugby4Heroes festival held at the home of Old Leamingtonians RFC. The day started with a small Remembrance Parade for the Warwickshire Soldiers who had fallen in recent conflicts. As the last post sounded the Army Masters stood shoulder to shoulder and lowered their heads in remembrance, at the reveille the Army Masters came together to focus on the first game.
The first game was against the home team Leamingtonians Vets, with the crowd behind them they could prove to be a test for the Army. This was certainly the case in the early exchanges, as the Vets threw everything they had at the Army; the game needed a spark from the slow starting Masters. As the Vets coughed up possession, the ball was quickly moved away from the impressive oppositions pack to something the Vets had not expected, 6 feet 3”, 17 stone of Guardsman fury now had the ball, in the shape of WO2 Brad Sutherland ATC (P) and with a trademark dummy kick go, he broke the defence which lead to the first try of the day for Cpl Mekemeke, 1 Regt Army Air Corps. It was the spark needed and tries from Cpl Narruhn, 5 FS BN REME, Sgt Williams, 5Bn REME, Sgt Tamatawale, 27 Regt RLC, WO2 Southerland ATC (P), Sgt Gray HQ ARRC and 5 from Balekinasiga, 11 Sig Regt, meant the Masters won the game 45 – 13 to start their campaign in style. 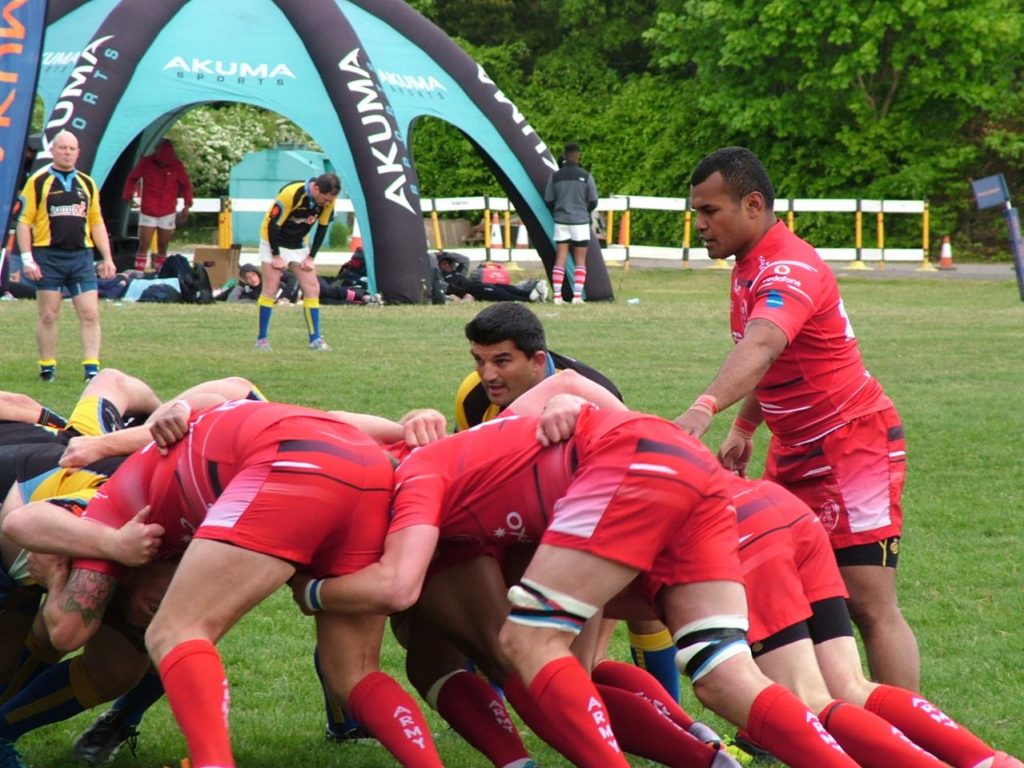 The next opposition was Newport who sported some very handy players including one with a 50 meter kick. The Army with a game under their belt were not the slow starters the crowd had seen in the first game and a defence lead by the team Captain for the day WO1 Jackson, HQ 11 Sig Bde and Sgt (the Pirate) Gray, HQ ARRC stole every ball it seemed at the break down. This hampered the Newport attack and the Masters were now playing 7’s style rugby, moving the ball from one side to the other, with the Newport defence chasing shadows, the gaps began to appear. Tries coming from Cpl Mekemeke 1 Regt Army Air Corps, WO2 Southerland ATC (P), Balekinasiga, 11 Sig Regt, 2 for Sgt Tamatawale, 27 Regt RLC and 3 for Cpl Narruhn, 5 FS BN REME, concluded the pool with the Masters at the top.
So onto the final in the main arena, against the top of Pool 2, Kenilworth Pirates, they had an impressive record in the pool winning 38-7 and 57-0, the final was billed as the one to watch. With an hour before the final some players soaked up the amazing atmosphere at the tournament that Old Leamingtonians RFC had created. Maj Ali Reece the Head Physio worked her magic on the rest of the team, preparing them for the final, body management the name of the game. With both teams ready and the crowed clearly excited, the Army Masters kicked long to the Pirates. The heavy pack secured their ball and started their attack deep from their own 22, the Pirates were well aware of the Army’s attack, but had not foreseen what was coming, as the ball was spun into the centres it was met with a brutal defence, a tackle from Sgt (Sonny Bill the Chiropractor) Williams 5Bn REME, if the attacker had a back problem Sonny straightened it out for him, unfortunately for the Pirates the ball bounced into Sgt Tamatawale 27 Regt RLC hands and he ran in the 1st try. 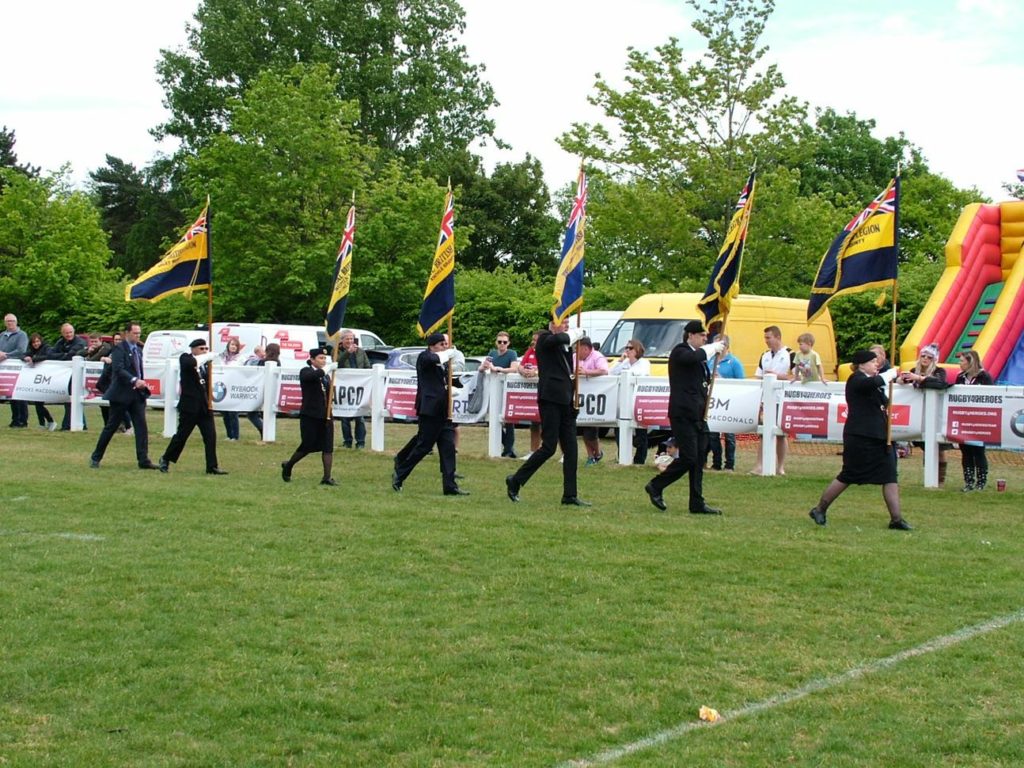 The Army kicked long again and the Pirates stuck to their game plan that had served them well, however as the ball again went to the centre a tackle from Cpl Kapaiwai MCTC, that was made in the South Sea Island of Fiji, stopped the attack dead, this time the ball bounced into Cpl Narruhn 5 FS BN REME arms for the second try. The Pirates had to change tactics and decided on a full frontal attack into the heart of the Masters defence, one up rugby drove them to the Army’s try line. The Masters were now under immense pressure and it finally took its toll with a yellow card being shown. With the Army down a player, the Pirates decided to continue the assault, the Army were under siege on their own line for what seemed an age, it was not pretty rugby but the crowd loved the brutality of the blockade, the line eventually broke leading to the Pirates first try. After the kick off the pirates continued their one up rugby but they spilt the ball and WO2 Paul Namatawale DE&S took control and increased the pace, the ball went wide to Sgt Gray HQ ARRC, who attacked the gaps putting Sgt Tamatawale 27 Regt RLC into open water and the crowd, knew this meant one thing “try time”. As the half drew to a close WO2 Brad Southerland ATC (P) grabbed a try. 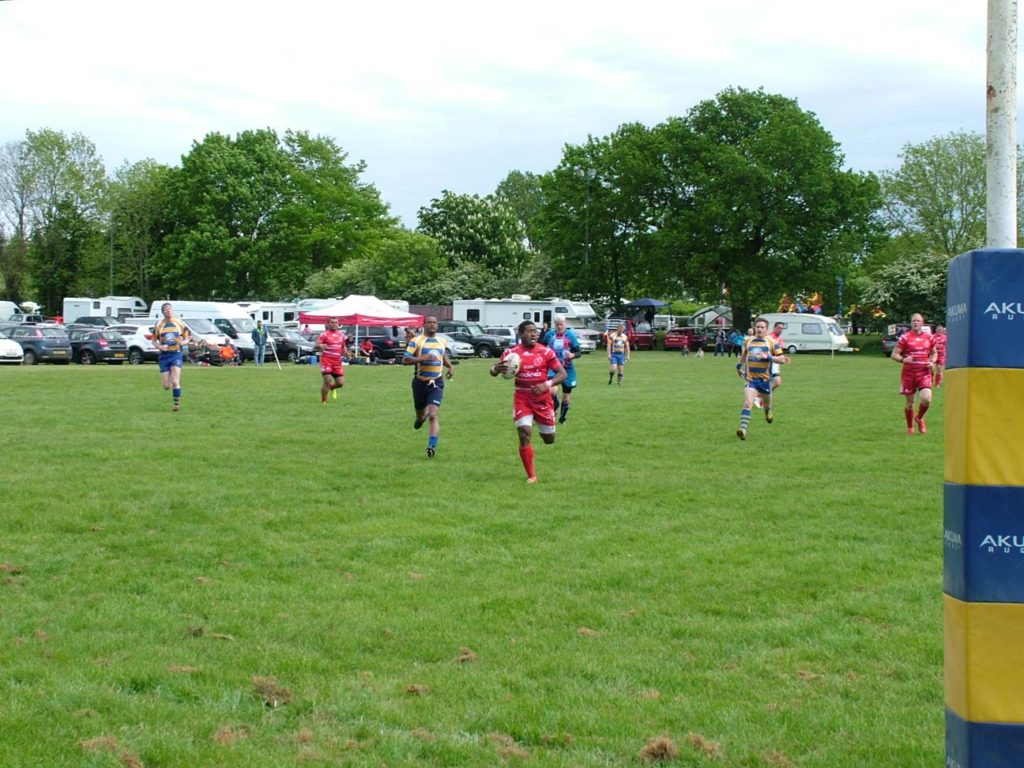 The second half the Pirates kicked off, they flew up in defence, but Masters Captain WO1 Jackson HQ 11 Sig Bde, called for the ball, “time to steady the ship”, the Welshman punched the defence and with the Welsh word Tarw (The Bull) springing to mind, he crashed through and ran under the sticks. The Pirates looked tired, maybe the attack from the first half had taken everything from them, they were struggling to match the Army now, SSgt Levin 30 Sig Regt, who had been salmon like jumping in the line out, scored his first try for the Army Masters. With the game drawing to an end the crowd had changed allegiances, they were enjoying the open running rugby, the magical feet of Fijian’s, the power in the tackling, it did tick all the boxes as to why the game was invented. But the crowd wanted more and they were not to be disappointed. The Pirates kicked long, 5 meters from the Army try line, as Sgt Tamatawale 27 Regt RLC, picked the ball up, the crowd noise went up in excitement, with the open field and a tired defence, all you could see was a flash of yellow from his boots, he sidestepped three then took two on the outside, with far too much pace he was heading to the try line, the Ref the only one trying to keep up, so much to the crowd’s delight, he slowed for him and the crowd cheered them both as they ran together under the sticks for the last try, the last conversion and the last whistle. Final score – Army Master 52 – Kenilworth Pirates 7; The Army Masters, a team all over 35’s are Masters of the game for a reason, they have all given over 15 years to Army grassroots rugby, with 11 players they held over 50 Corps Caps, several senior Army Caps and 9 of the 11 that took the field having arguably the hardest cap to earn, the Army Masters Cap. 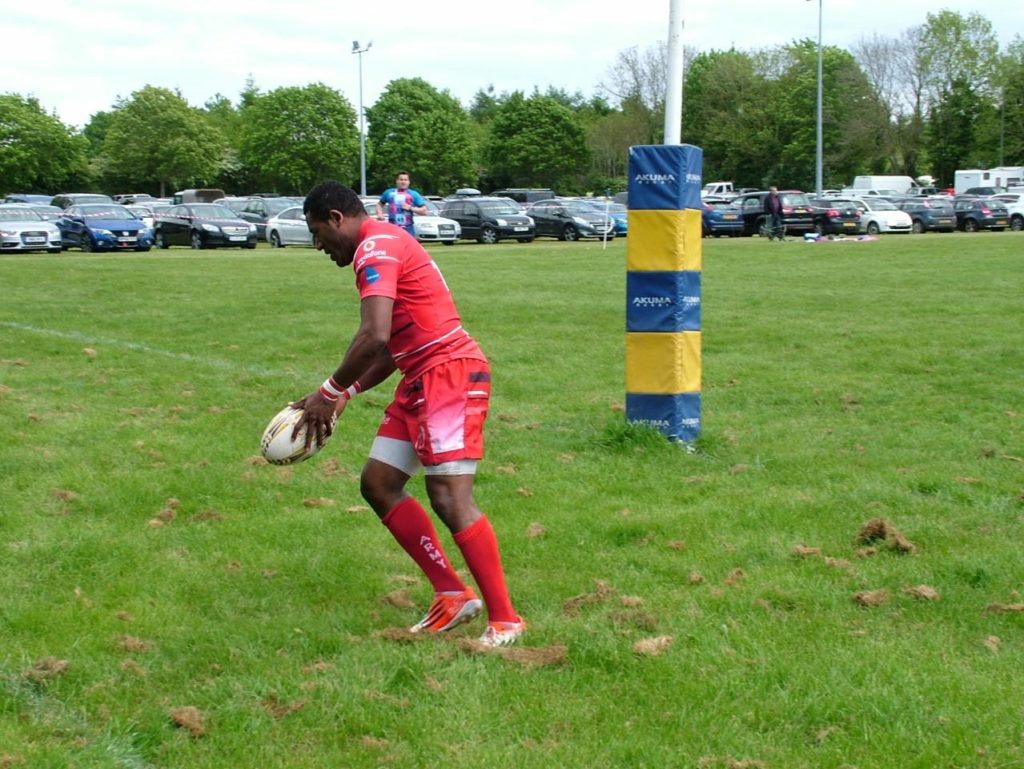 “We Will Remember Them” – Report by SSgt Jones RE Masters Rugby.

A statement from the Army v Navy Match Committee