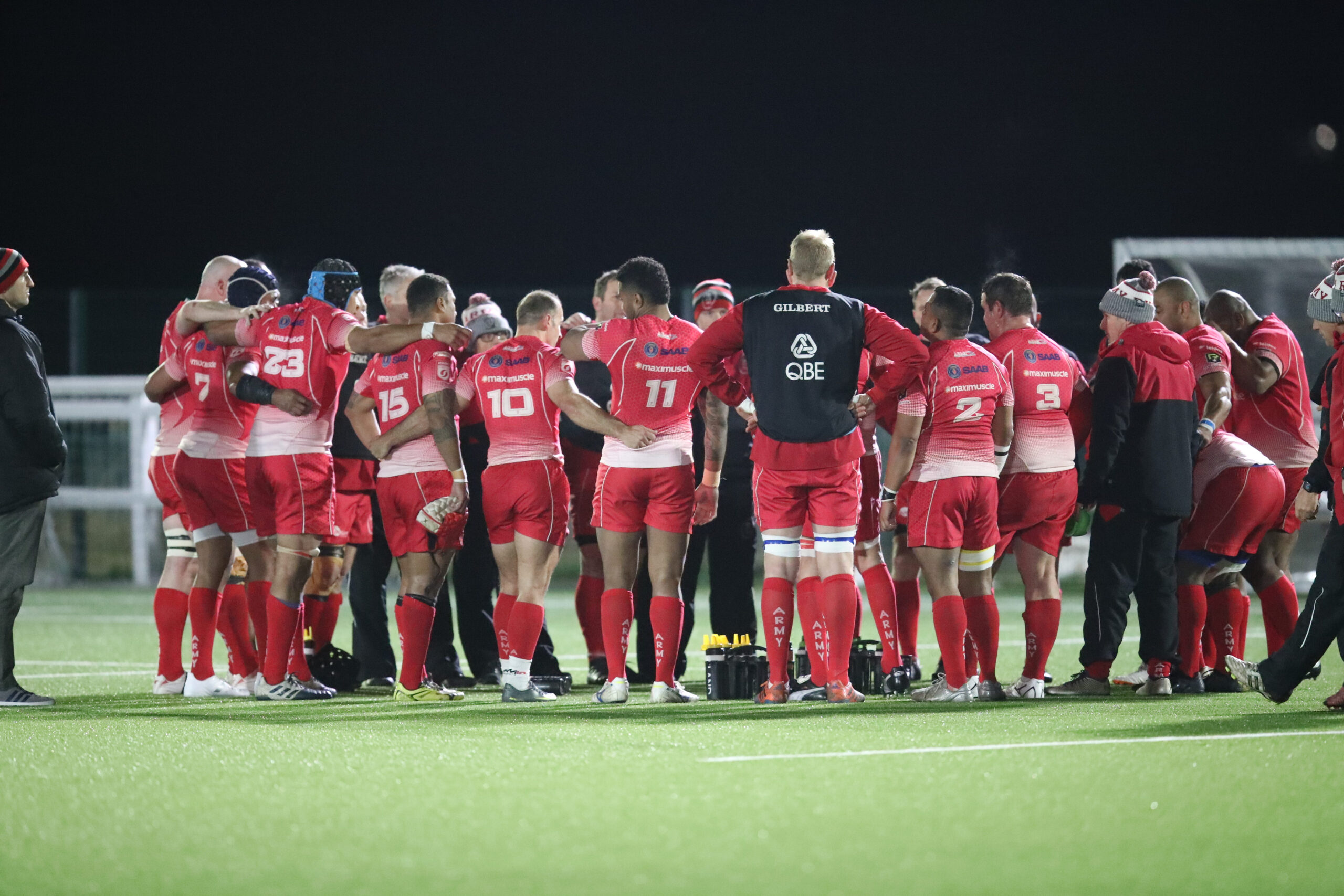 By Kimberley FowkeMarch 21, 2022No Comments

A mild but very wet and damp Friday evening under floodlights at the Horsham RFC, playing on a 4G pitch was shaping up to be a good final preparation match for the Army Masters prior to the Inter Services against the RAF later this month.

Horsham who are sitting mid table within their league are a young, fit and physical team who would play to their strengths and try to move the much older Masters team around the park. From the first whistle Horsham were quick of the mark and the Masters were left a little shocked  as unsecured ball from the kick-off allowed Horsham to secure and recycle the ball to score and convert within 90 seconds. 7-0 Horsham

A good start by Horsham and it was clear that their intent was to pin the Masters in their own half using the big boot of their number 12.  Up front it was an even battle with scrums going either way.  Both teams were carrying strong, but with the Army trying to play out of their 22 it was always going to be difficult. A clearance kick didn’t make touch, allowing Horsham to secure the ball and the youth in their back line started to show their pace with the outside centre breaking through supported by the winger who scored in the corner.  Conversion unsuccessful; Horsham extend their lead within 9 mins. 12-0.

With strong carries from both sides and Horsham sticking with their game plan pinning the Masters in their own half, another great kick from the Horsham 12 to touch saw the Army back into their 22 once again. Having to defend their line, an over-throw from the Masters hooker saw Horsham secure the ball and recycle quickly to release the winger who again scored in the corner. 18 mins gone and the try converted Horsham extended their lead to 19-0.

The Masters started to string some excellent play together attacking the areas the coaches wanted them to and made positive ground, the match was turning out to be a great physical contest despite the score.  The greasy wet conditions were not helping when a loose ball was knocked on and a deep kick back by Horsham into the Masters half saw the Masters fullback covering only to have an ugly bounce of the ball which released the winger supported by his outside centre who scored the final points of the first half under the posts. 26-0 Half Time.

The Masters regrouped at the break and took all the positives out of the first half and with some changes made to the team, the Masters started the second half very positively with strong scrums and strong forward play allowing the backs to get quick ball putting them on the front foot and making Horsham defend their own line.  Just as the run of play seemed to be in the Masters favour an accidental offside resulted in a scrum to Horsham.  The Horsham scum under pressure resulted in their 8 having to pick and go, this was well defended and slowed the ball for Horsham who’s 9 tried to clear their lines but kicked the ball accidentally into one of his own players to see it ricocheting over the try line with the Masters hooker Capt Sutton go through onto the ball to score a try for the Army after 53 mins. Unconverted.  26-5 Horsham

Not long after what was an excellent spell for the Army  Masters a lack of concentration allowed Horsham to capitalise on their speed and saw their winger go and score his hat-trick for the evening which was also converted extending their lead to 33-5.

Over the next 10 mins the Masters were really starting to show their strengths, despite the score, with some great attacking play.  The Masters were awarded a penalty and as the lineout and mauls were working nicely, the Army decided to kick from deep in their half towards the corner but unfortunately the kick wasn’t as accurate as they wanted resulting in the ball going dead – scrum to Horsham 30 meters out from the Masters try line.  The Masters defended well but then, seemingly from nowhere the fresh legs of Horsham substitute No 22 showed great speed and foot work making a great break and releasing the 12 to go over the try line.  Conversion missed the score now 38-5 to Horsham. 72 Mins

Despite the score, the Masters were playing some excellent physical rugby, running the lines and sticking to the game plan that the Head Coach Deano Lloyd-Christie wanted them to play.  Camped in the opposition half, Horsham won the ball off a scrum but the Masters defence was up quickly and were awarded a penalty, the Horsham player judged to be holding on. Army kick to the corner.

A great lineout by the Masters who started to maul towards the Horsham try line, with the Hooker on the ball Capt Sutton again broke the line to go over and score his second try of the evening. Unfortunately, this was not converted with 78 mins gone the score is 38-10 Horsham.

38-10 to Horsham was the final score on a very entertaining physical fixture, with some great positive play throughout the game by the Masters who looking forward to the start of the Inter Services against the RAF on the 26 Mar 22 in Gloucester.

Man of the match for the Army Masters – Cpl Joe Nalewabau