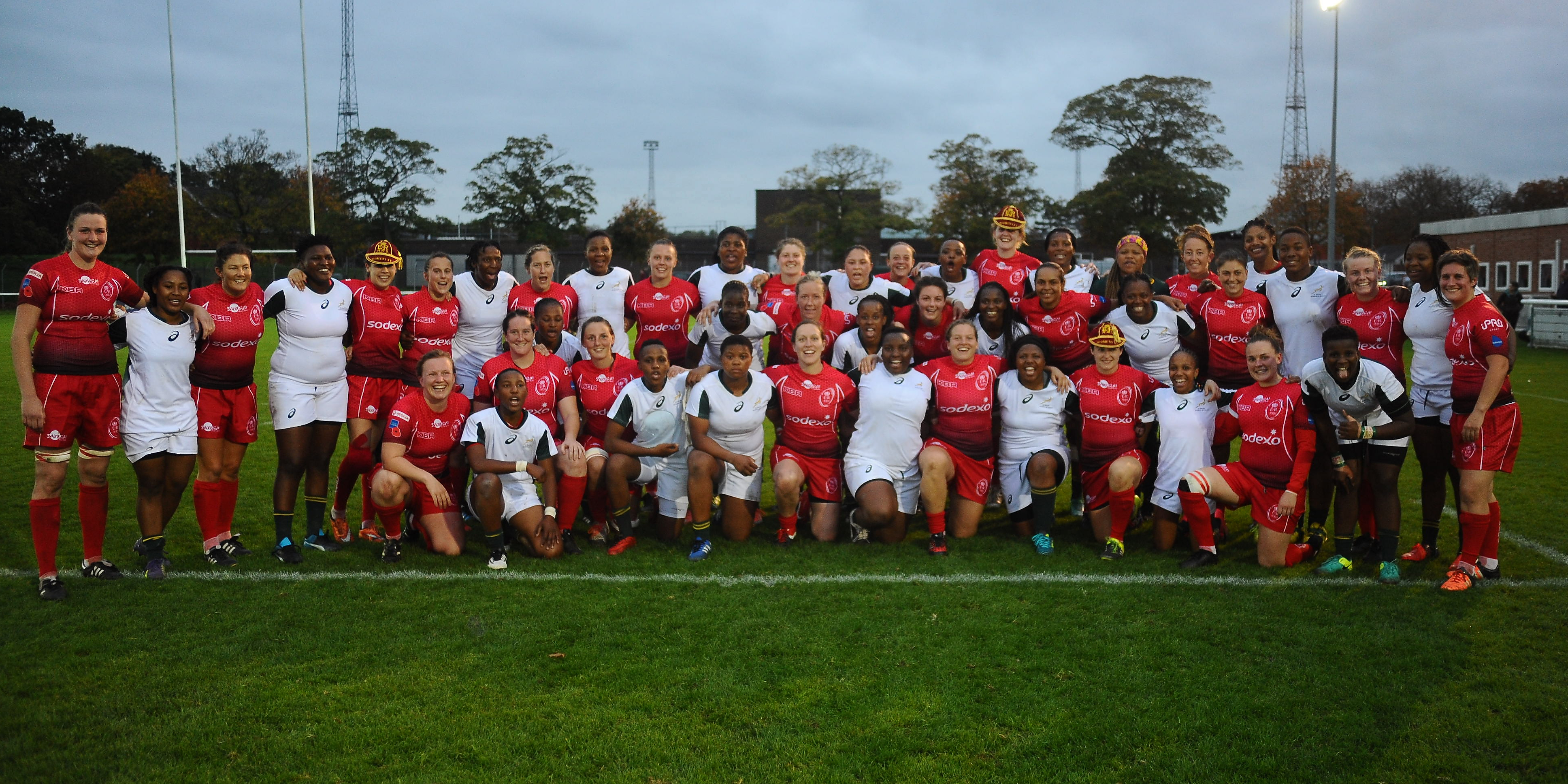 It’s a measure of where Women’s Rugby has come from in the Army in that our representative side can field a Development side, that in itself had a couple of capped UKAF and senior Army players on the same afternoon that the senior Women would face the toughest challenge of their 20 years since the formation of a representative team.
That’s exactly what happen this Saturday as Aldershot Army Rugby staged its first ever Women’s ‘Double Header’. 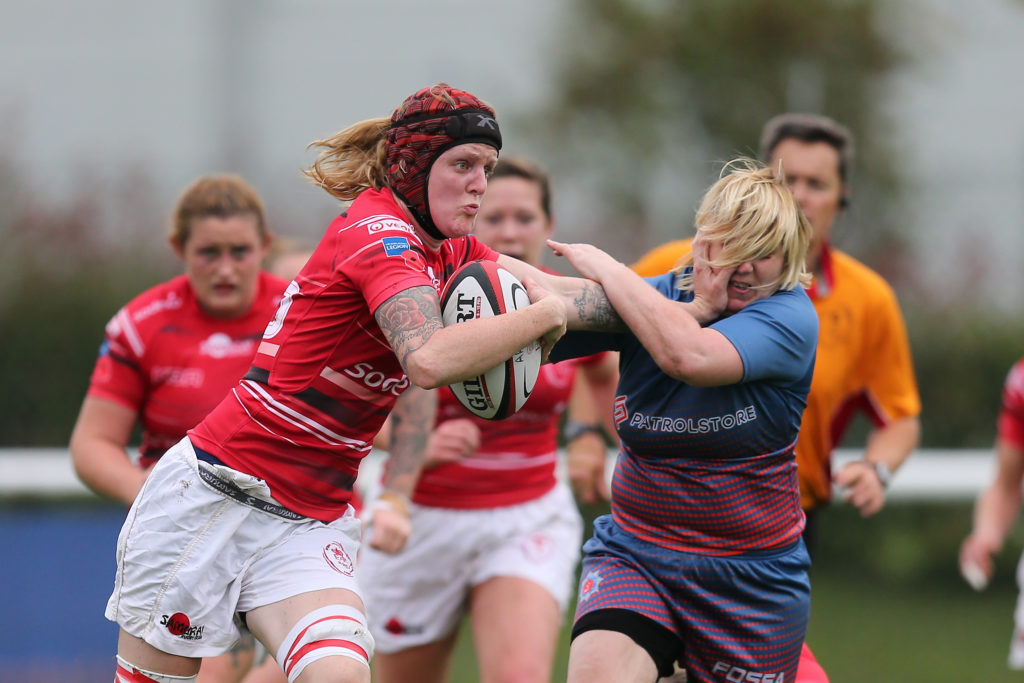 The British Police are a well-known and respected opposition who have thrown the gauntlet down to our Women’s side on numerous occasions, this time as in previous encounters the match was no less physical and no less entertaining. It was a measure of the intent from both teams that from the opening kick-off it was a full 7 minutes before referee David Wakefield had to blow his whistle for the first infringement. The match was a highly entertaining affair that a good vocal crowd appreciated with both teams looking to move the ball away from contact and create openings for the backs to run. The Police on this occasion running out the victors 19-5. Round one complete and the anticipation of what was to occur next was probably not what actually happened on the field. 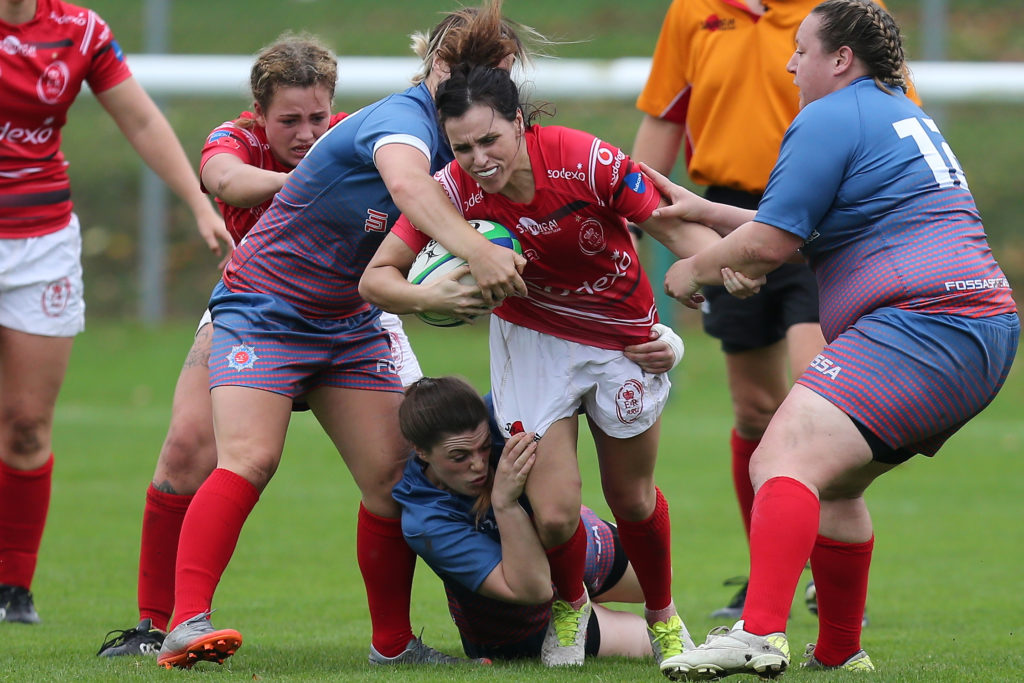 South Africa have a large base to select from; their Women’s sevens squad are an outstanding team and they had brought players from the southern hemisphere who’s teams ‘ring well’ around the UK; Western Province, Border, Free State and the Blue Bulls to mention a few. The Springbok women were big and strong; in appearance they looked much more physical than the Army Team warming up on the opposite half of the pitch. What the South Africans perhaps weren’t expecting was a group of Women that have experienced International opposition previously; ok, Germany and Holland are a few places below South Africa in the World rankings but this is a group of women who truly believe in themselves and have at their inner core the Army values and standards when they pull on the red shirt. 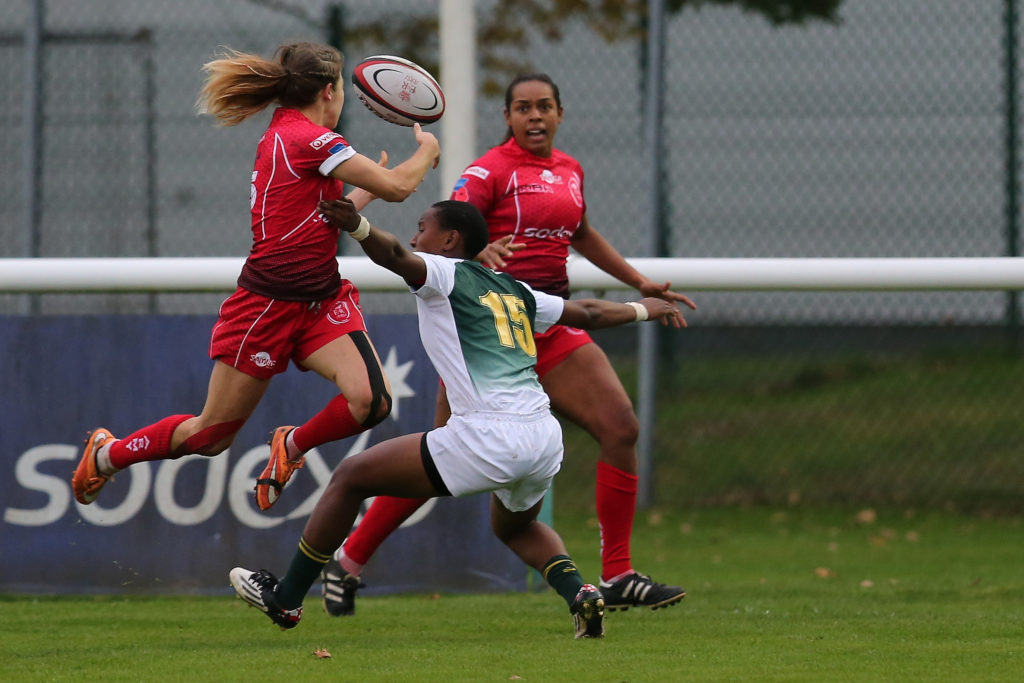 There’s something about Army representative sides in the way they start their matches, both the men and the women’s team take 10-15minutes to really get themselves going, and before they knew where they were the Women were 10-0 down to some fast and powerful Bok Backs who boshed their way through the RED Defence. However resilience is something that develops over a period of time and slowly but gradually the REDS came back into the match, wave after wave of Army attack was met with massive bone crunching hit, three South Africans smashed the Army attackers trying to penetrate the defensive line, the large crowd gasped as time after time the Army women dusted themselves off, got back up and drove into the Boks line. Military fitness started to tell and the South Africans were visibly not as quick up in their defensive line. Their tackles were just as ferocious but they were going off their feet and as a result had two players sent to the sin bin for repeated infringements. The REDS sensed this was their moment and what a moment it was. A comfortable line out win had the backs do a ‘loop and run around’ to release the impressive debutant cap Lt Findy Parker REME, she cleared the final defender to score impressively to the delight of the raucous home crowd, five minutes earlier Parker was in-trouble as she was bull dozered into the grass by three huge defenders, that pain had long gone as she touched down. 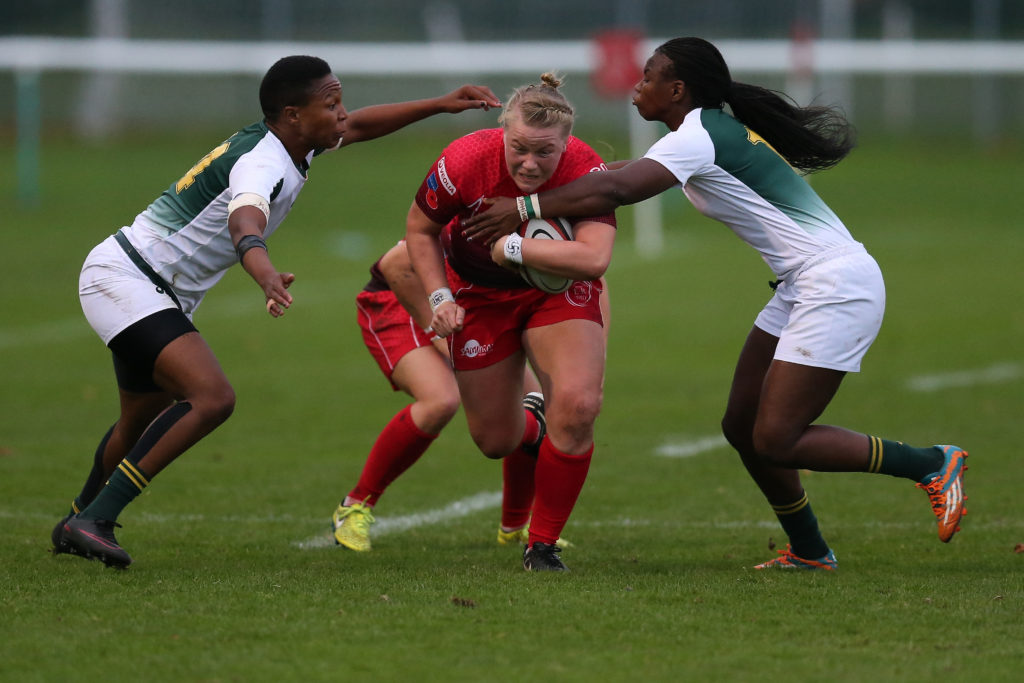 The contest was ‘on’ and the game became a frenetic attack and counter attack as both teams looked for the next score. Neither side scored again before half time and both teams headed down the tunnel to check that the leg bone was still connected to the hip bone!
The South Africans made several changes to start the second half, big tired forwards were replaced by bigger fresh forwards, to their credit the Army didn’t take a backward step, they tacked, tacked and when the next wave of attack came they tackled again! There was a sense of ‘they will not pass’ as the crowd really got behind the Ladies in RED! 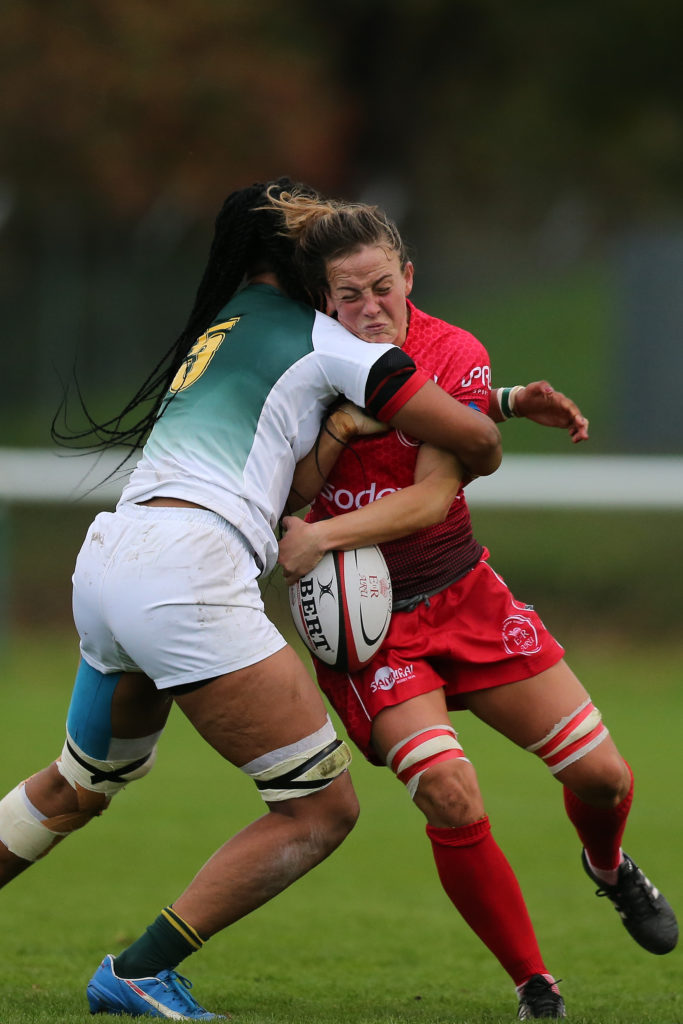 As the match closed out the South Africa’s just didn’t stop, the Army line was breached three more times in the final 10 minutes, the last being the final play of the match, both sides and a highly appreciative crowd knew they had contributed to something quite special. The South Africans will play two more fixtures against an England Development XV, they must be hoping that their next opponents don’t have as much ‘heart’ as the Army. South African fly half Vuyolwethu Maqolo and OCdt Sally Scott were named players of the match respectively, if this is what we can expect when our Women play International opposition, when’s the next match please?
An outstanding afternoon that will be remembered by so many positives, all in the Army Rugby Union wish the South Africa Team well for their remaining time in United Kingdom. 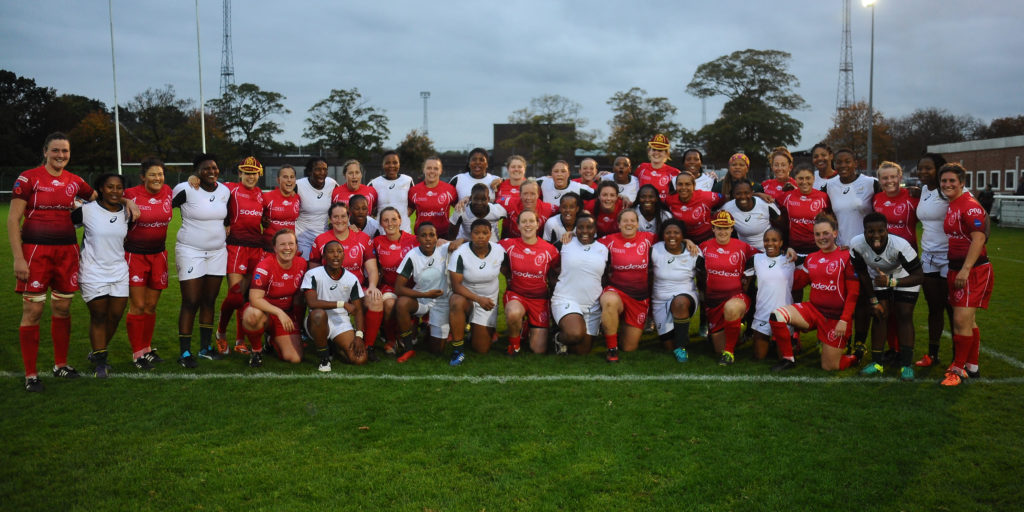