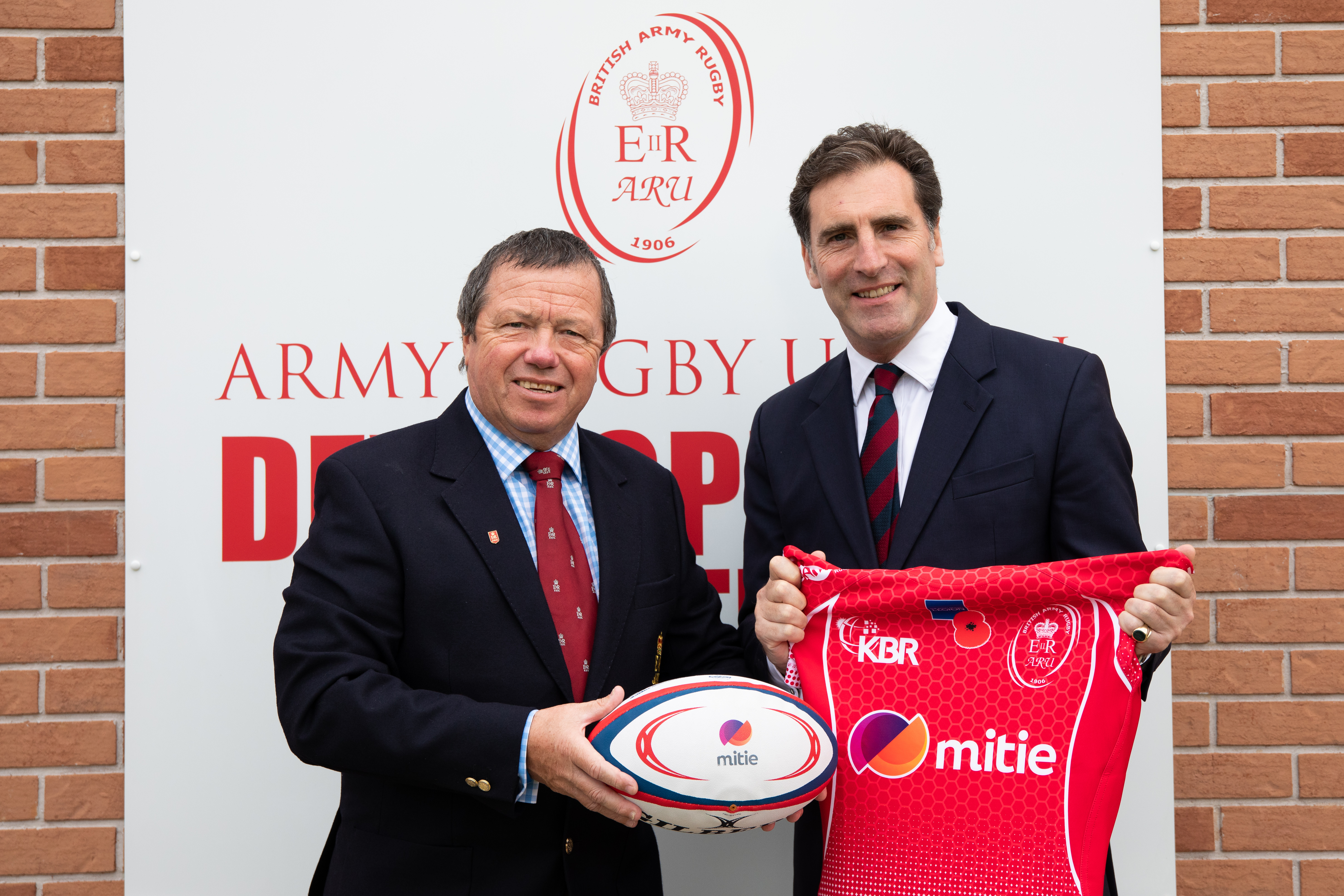 The Army Rugby Union are delighted to announce a new partnership deal with Mitie as principle sponsor for representative rugby.

The sponsorship forms part of Mitie’s commitment to the armed forces community as signatory of the Armed Forces Covenant.

Mitie, the UK’s leading facilities management and professional services company, has announced a new sponsorship deal with the Army Rugby Union (ARU) elite teams, for two years with the option to extend to three. Kicking-off from the beginning of the 2019/20 season in September, the sponsorship covers the Union’s four Elite Teams: the Senior Men’s XV, Senior Women’s XV, Academy (under 23s) XV and Masters (over 35s) Teams.

The sponsorship agreement was formally announced this week, at an official meeting at the Army Rugby Stadium in Aldershot between Charles Antelme, Head of Defence at Mitie, and Chris Fowke, Chief Operating Officer at the ARU. As the lead sponsor of the Army Rugby Union, the Mitie logo will have pride of place on the front of each team’s shirts.

The ARU was formed in 1906 to support and promote Rugby Union within the British Army and its local communities. With four elite teams, the ARU has a packed season of 43 fixtures, culminating in the two big inter-services games against the RAF (4 April 2020 at Gloucester) and the Navy (2 May 2020 at Twickenham).

The agreement cements Mitie’s commitment to the armed forces community, as a signatory of the Armed Forces Covenant. Mitie has also recently been named a holder of the Defence Employer Recognition Scheme Silver Award in acknowledgement of its support to the military family. This support includes several new initiatives recently launched by Mitie, such as its new employee network, The Mitie Military, created to offer Forces colleagues a forum to share experiences and drive positive changes within the business. Mitie also recently launched a dedicated career portal for those with a military background, to highlight potential career opportunities within the facilities management industry.

“As proud supporters of the entire military community, we’re delighted to announce our official sponsorship of the Army Rugby Union teams. We’re looking forward to cheering them all on and are honoured to have the Mite logo on each team’s shirts.”

“We are hugely reliant on the generosity and support of our sponsors and the principal sponsor, in particular to enable all the activities and competitions that we undertake annually. It is very exciting, therefore, to announce this new partnership with Mitie, a FM company that holds dear the very values that we foster in the ARU.

“We hope over the next two years and beyond to grow this relationship for the benefit of all our players and the wider rugby community, both in the UK and overseas, and are hugely enthused by the potential opportunities this partnership will present.”

For more information on how Mitie supports the armed forces, visit www.mitie.com/armedforces.

Mitie employs 48,900 people across the country, looking after a large, diverse, blue-chip customer base, from banks and retailers, to hospitals, schools and government offices. It takes care of its customers’ people and buildings, by delivering the basics brilliantly and by deploying advanced technology. It is pioneering the Connected Workspace, using smart analytics to provide valuable insight and deliver efficiencies to create outstanding work environments for customers.