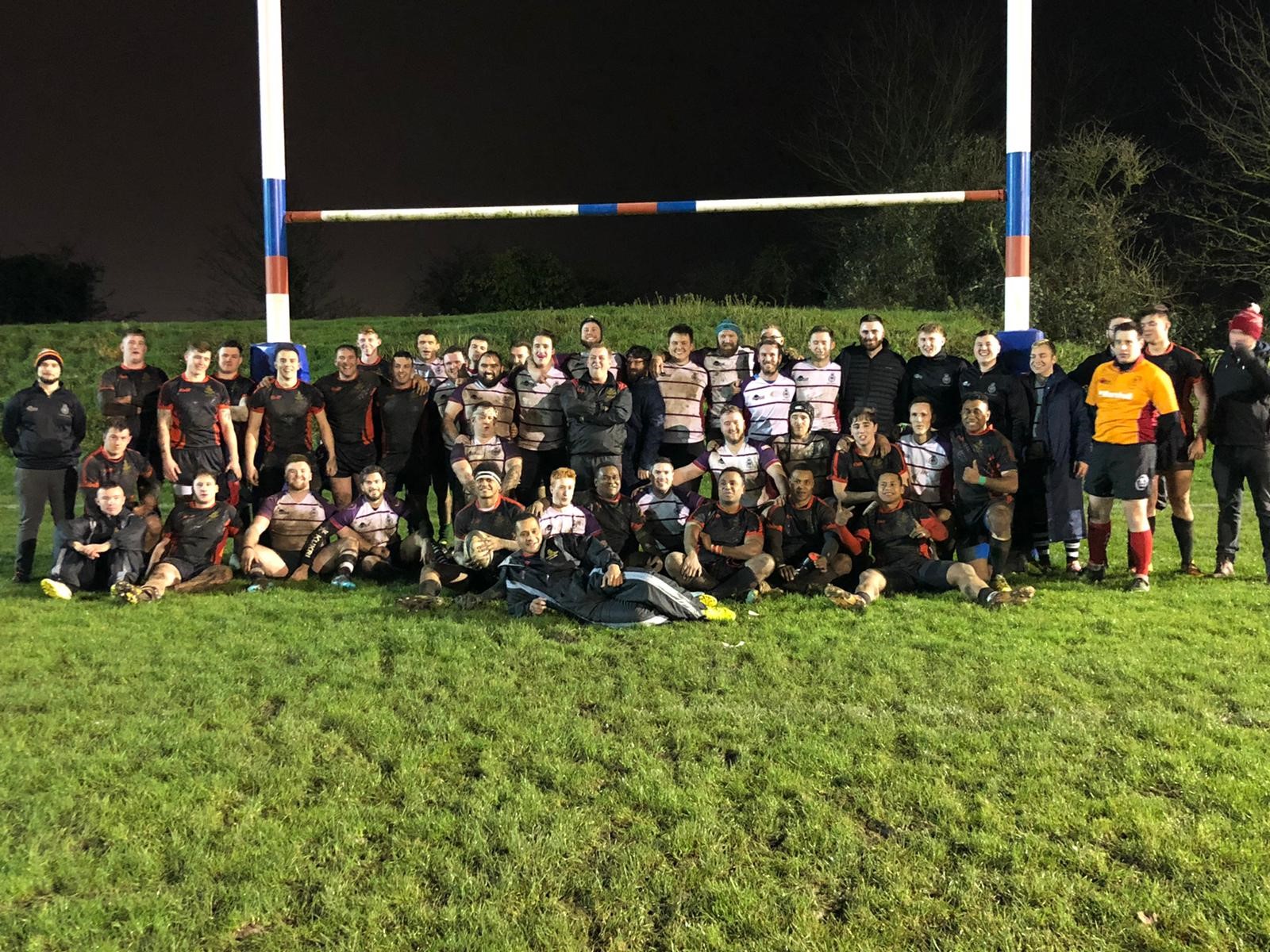 North Bristol Rugby Club hosted what was a closely fought rugby game to determine who would proceed to the Bowl Semi Finals of the ARU Championship Knock Out Competition.  Conditions at kick off were cold and still, making for a good game of rugby, however underfoot was damp which would challenge the player’s handling skills.  MoD Abbeywood (ABW) and 26 Regt Royal Artillery (26RA) had faced each other earlier in the season in a friendly match but now well into the season it was time for knock out rugby.

The opening few minutes of the match saw some good early exchanges, with ABW playing for territory and keeping 26RA under pressure resulting in an ABW scrum deep in the opposition 22.  Already, ABW were beginning to demonstrate their dominance in the scrum, with No8 Maj Dan Smith RLC picking up from the back of the scrum and powering through for a score in the corner.  ABW Full Back Jones was unable to add the extra 2 points from wide out.  5-0 to ABW.

26RA were able to get into their game straight from the restart, with some good foot work from their exciting back line forcing ABW into a period of sustained defence.  A few loose kicks from ABW following turnovers again allowed 26RA to test Abbey Wood’s defence, crashing it up the centre with some big tackles being made in the effort to force the knock on or turnover.  Unfortunately, less than 15 minutes into the game an injury to a RA26 player brought play to a halt.

With player welfare rightly taking priority the game was moved from the 3G field to the adjacent grass pitch to allow medical attention to the injured player, we wish him a speedy recovery.

Following an extended break, the game restarted, with both teams taking a few minutes to get back into the match there were many mistakes and playing of the advantage in an attempt to find the mismatch in broken play.  15 minutes after the restart 26RA won a penalty, resulting in a line out on the ABW 22.  However, the attack broke down and they were unable to convert this territory into points.  The following passage of play saw ABW turn the territory deficit around and again putting pressure back on 26RA they were awarded three penalties within kicking range in quick succession. ABW focused on the knockout rugby mantra “keep the score board ticking over”; 14-0.

Restarting with a 26RA 22 drop out after ABW kicked into their in-goal, a strong run from Winger Gunner Coqabula took play up to Abbeywoods’s 5 meter line.  From an attacking line out, Fly Half Gunner Ben Baker was able to find the gap and the try line for RA26’s first score of the game.  The conversion was missed, so the half ended 14-5 with it all still to play for in the final 40 minutes. 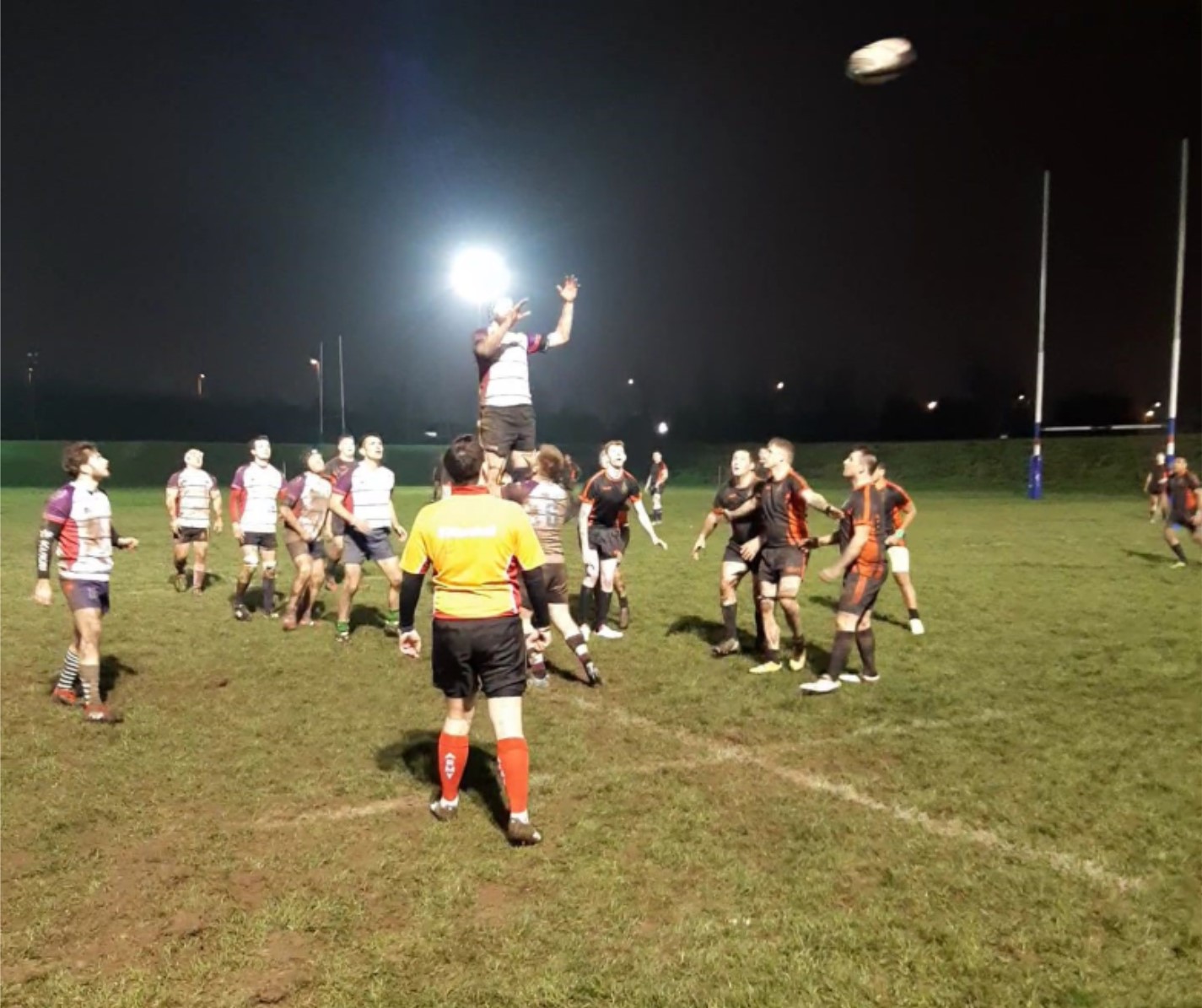 26RA started the second half as they finished the first, breaking tackles and finding space – this time down the left-hand side, but indiscipline led to a further ABW penalty and them extending the lead to 17-5.

At this stage it looked from the touchline that Abbey Wood had full control of the game, however Gunner Ben Baker had other ideas and made an excellent break from his own half, evading and breaking several tackles before being stopped with some desperate cover tackling well inside the Abbey Wood half.  Full Back Pte Mason was able to finish off the move with a try under the posts, making the conversion a certainty. The fight back from 26RA was on; 17-12!

ABW decided to keep it in the forwards and were able to advance their field position into the 26RA half before the Gunners turned the ball over on the 5 meter line at the ruck.  At this stage the scrums were uncontested, owing to several injuries within the 26RA front row.  15 minutes into the second half Gunner Baker made another clean break from a scrum just inside his own half, scoring his second try of the evening which was converted by Pte Mason and for the first time in the match 26RA took the lead. 17-19.

26RA continued to apply the pressure with Gunner ‘Kami’ Naikausa carrying the ball hard into contact and breaking tackles.  It was at this critical stage of the game Abbey Wood brought on fresh legs and reinforcements to wrestle the momentum back in their favour, with 20 minutes left on the clock it was still all to play for.

Abbey Wood key play maker Fly Half Maj Andy Britton was able to gain his team some much need field position with some good kicking options.  Strong forward play from ABW players such as James “Chubba” Davis and Ben Winter won ABW a potential match winning penalty middle of field within kicking range.  Full back Jones was having a stellar night from the tee and dissected the posts, taking ABW back into the lead. 20-19.

The ABW replacements were making a difference with tackles stopping RA26’s big ball carriers on the gain line, however the Gunners still remained a real threat out wide in broken play, evading several tackles but the play was now camped in the 26RA half.  With 10 minutes to play the ABW pack were driving to the line, and only a massive defence effort from the 26RA pack stopped what seemed like a certain try.  The referee ruling that the ball had been held up over the try line but the pressure remained on the defenders.  5 metre attacking scrum to Abbey Wood.

From the resulting scrum ABW were able to control the ball through a series of pick and goes, Prop Nathan Chalmers smashing over the line, for a classic 1m Prop’s try which he extended to 2 metres as he decided to carry the ball the extra metre before grounding it.  Jones’ radar was still fully operational, and he added the extra 2 points from out wide on the touch line.  This was an important kick taking Abbey Wood’s score beyond a converted try at 27-19, meaning 26RA would have to score twice in the final five minutes to win it.

However, that try proved to be the final significant act of the game, and at full time the score remained 27-19 to ABW. For what was a close, entertaining game in which the visitors just fell short it was agreed the final score was a fair reflection of the evening’s fixture.  All eyes now turn to the ARU Championship Semi Finals!