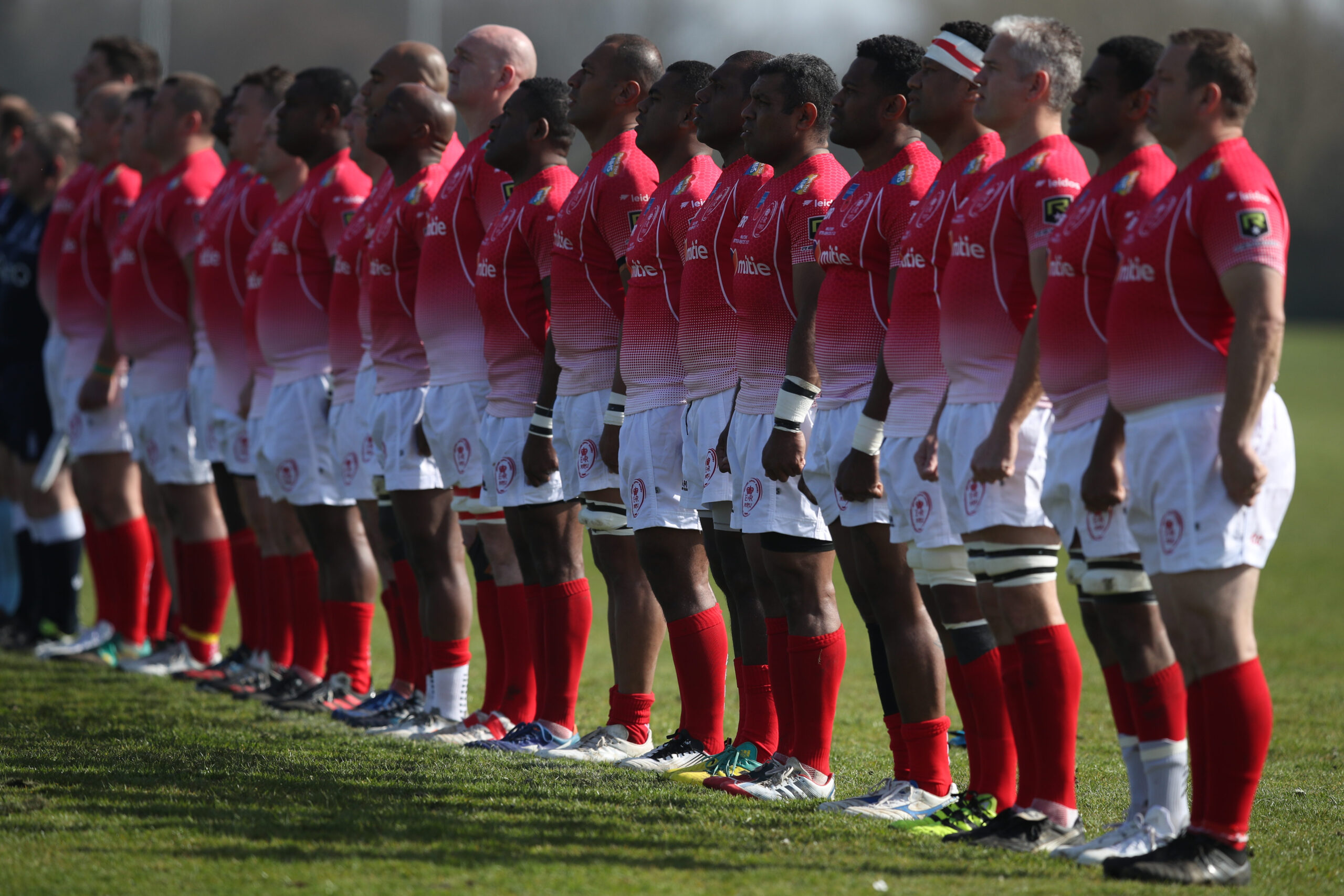 By Kimberley FowkeApril 5, 2022No Comments

Crowd and players alike were greeted to a warm, bright and sunny Saturday morning with hosts Old Richians RFC proving a very welcoming club for the curtain raiser for this Inter Services weekend between the RAF Vultures and Army Masters.

As players warmed up on the wide, grass pitch it was clear that this encounter would see two well prepared, physical teams go head-to-head as they sort to outwit their opposite numbers and impose their shape on the other. 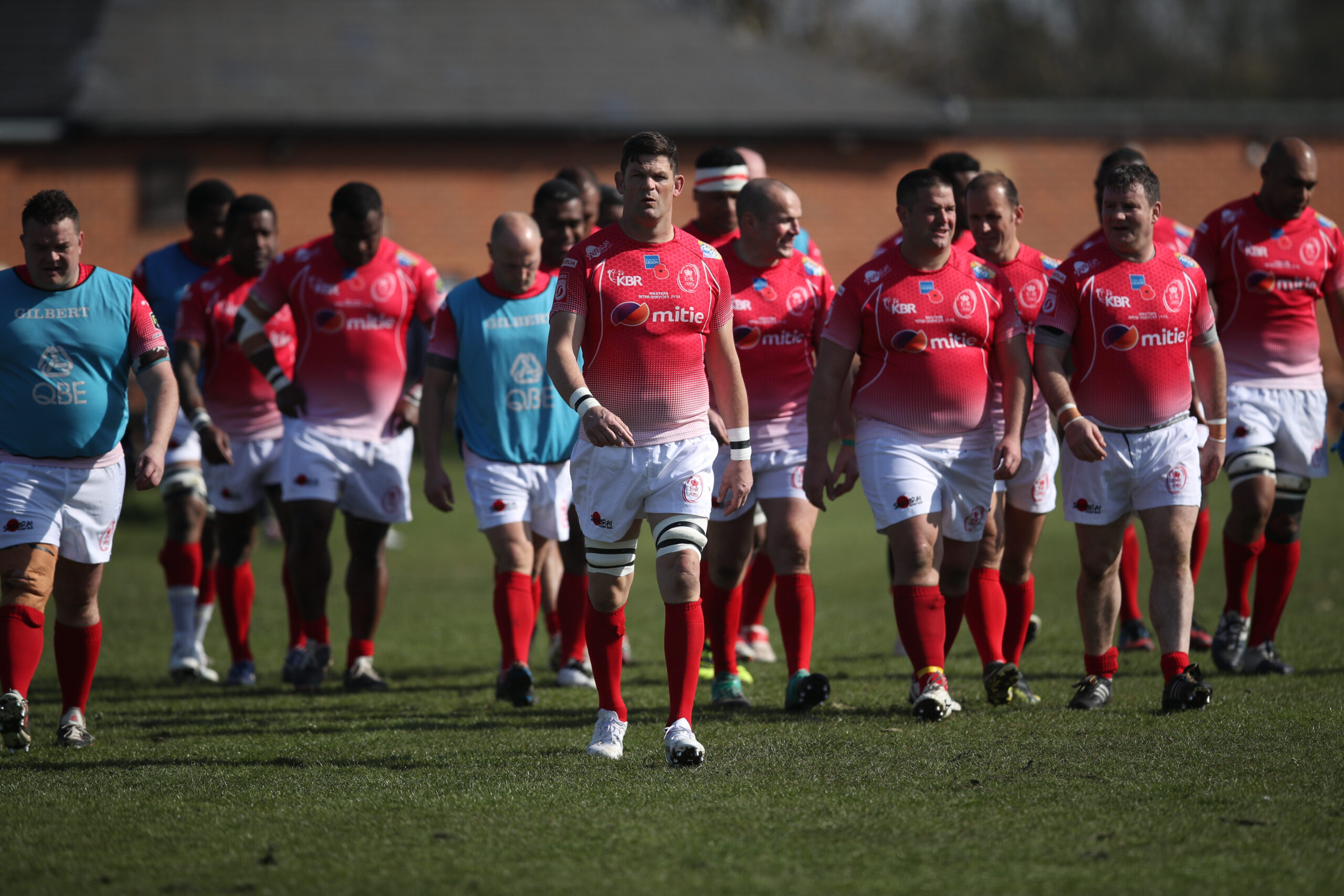 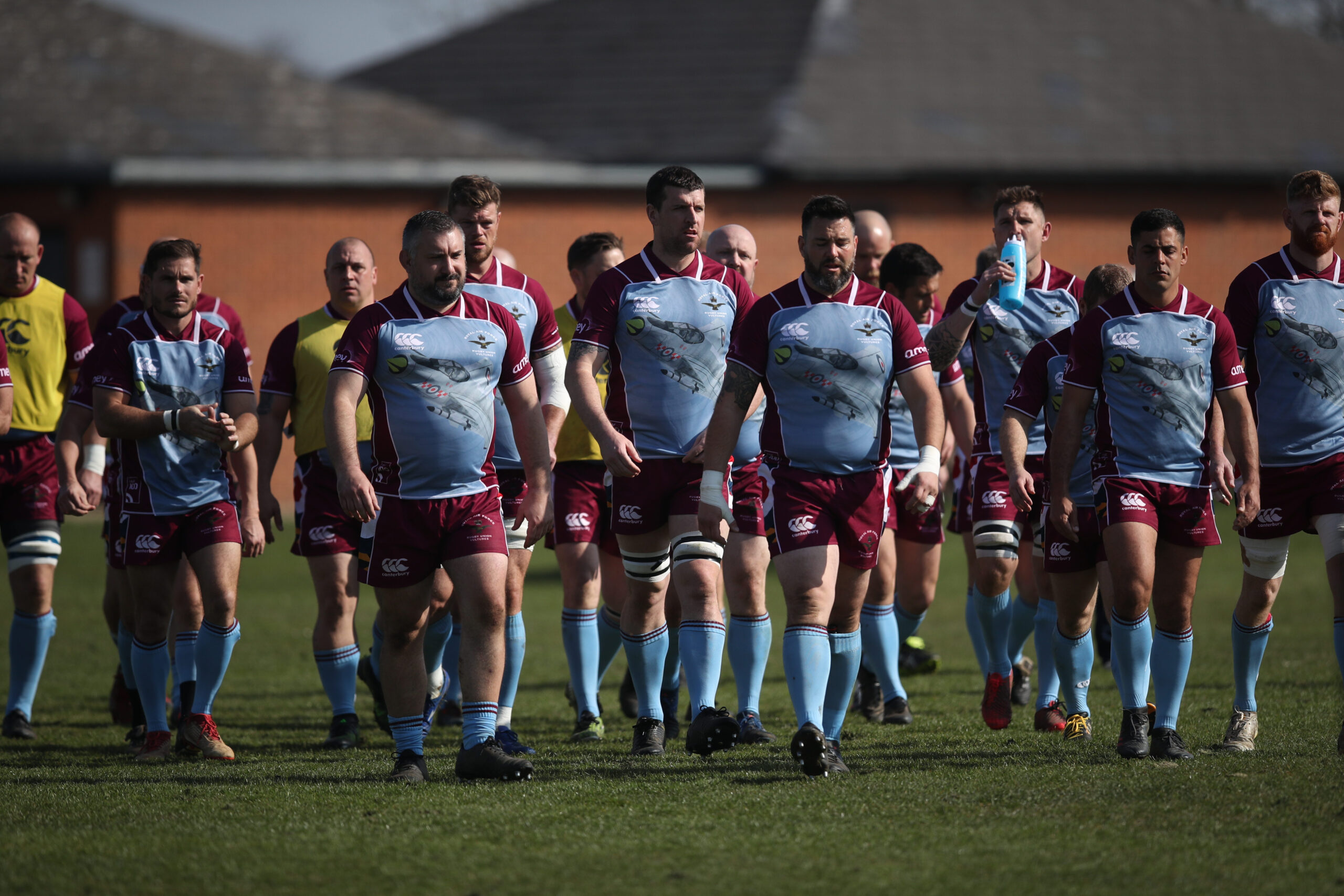 With both teams locked and loaded the referee blew his whistle for the first of many occasions and off the Masters went. A strong chase by the Masters resulted in them gaining early possession which was quickly turned over via a knock on which released the Vultures exciting backs and forced the Masters scramble defence to concede an early penalty within minutes from kick off.

The Vultures opted for the posts which just shaved the uprights; an early let off for the Masters. Its was clear from the off that the Vultures meant business and they quickly imposed their shape on the Masters through great attacking lines and strong clear outs at the rucks, which resulted in the Masters defence being tested and struggling to settle into the game.

The Vultures were awarded another penalty and following a lineout and strong carries by forwards and backs alike they crossed for the first score the game. They try was converted Vultures 7-0 after 7 mins. 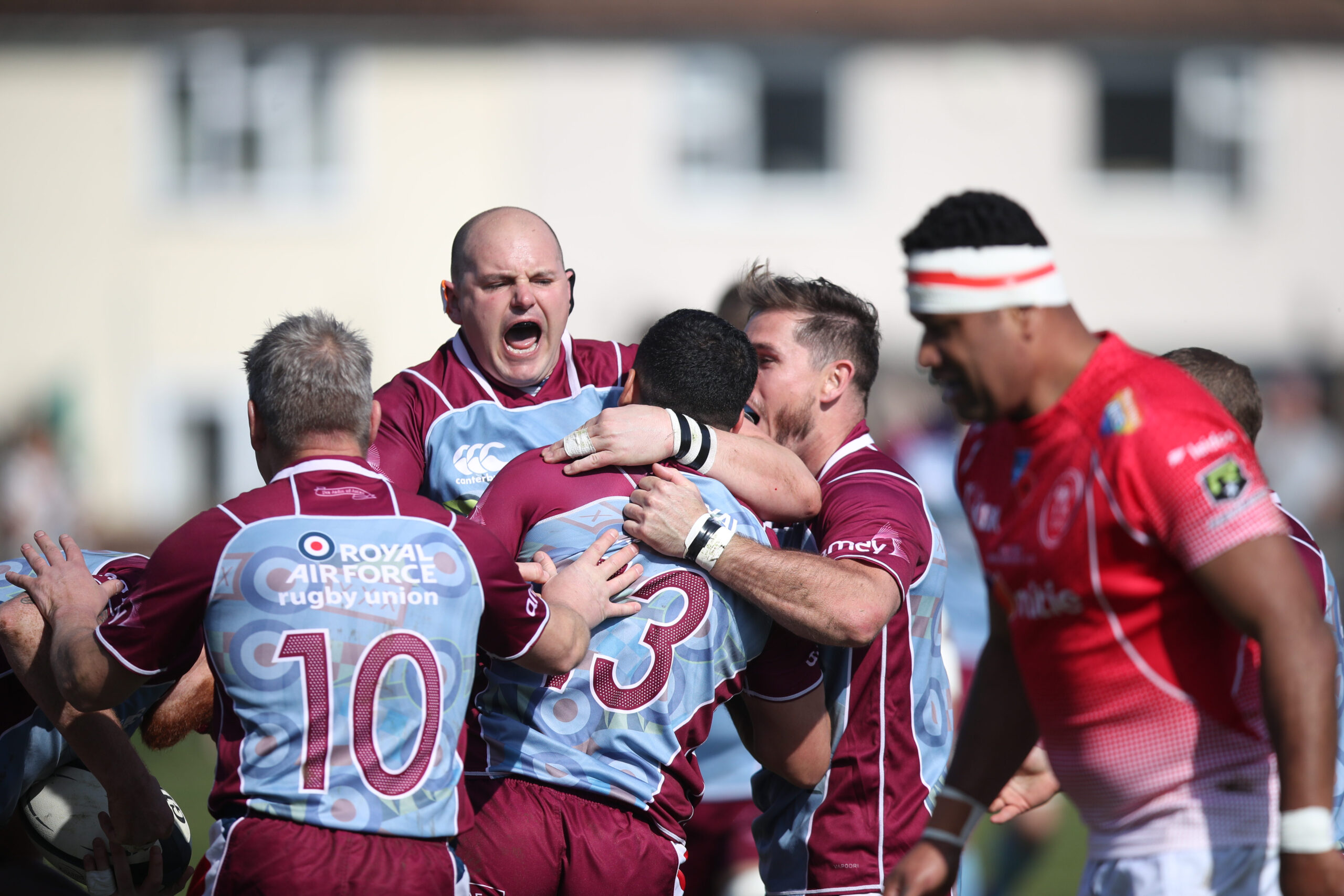 The Vultures continued their bombardment of Masters defence through a strong running game carefully orchestrated by their 9 as they mixed up forwards and backs to test the defence. Strong running rugby, quick recycling and fast hands saw the Masters having to constantly defend their lines resulting in a steady stream of interjections by the referee and warnings for team infringements.  From one such penalty the RAF Vultures kicked to the corner and after a great lineout they drove towards the line.  Stout defence by the Masters saw the ball being held up over the line resulting in a drop out.  The Masters cleared their lines only for the Vultures to run it hard back at them resulting in a high tackle by the Masters 12 Cpl Ifereimi Vukinavanua who was sent to the bin for 10 mins with a yellow card.  The Vultures opted for the posts and extended their lead to 10-0 after 18 mins. 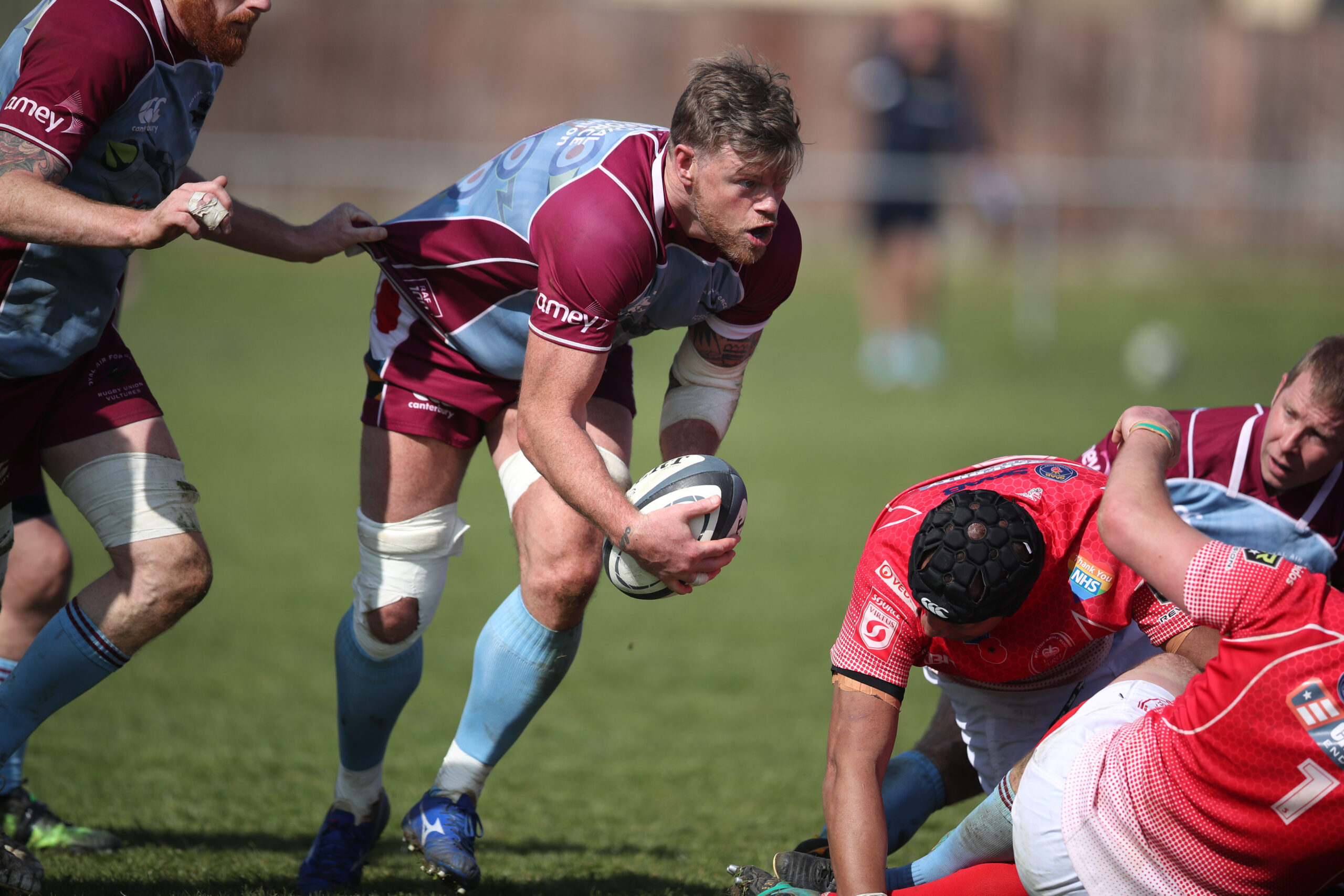 With the Masters now down to 14 and the Vultures showing no signs of letting up it was clear that the Masters were up against it. From the restart the Vultures started another attack, two minutes later they were awarded another penalty for the Masters being offside.  The Vultures opted to kick at goal but it was another let off for the Masters as the kick was pushed wide of the uprights.  Despite being a man down the Masters defence was excellent and unrelenting but following another couple of penalties including a high tackle from hooker Capt Sutty Sutton the referee had no choice but to offer him a 10min rest.  Now down to 13 the Masters were really up against it and having to dig deep if they are going to resist the RAF pressure and get back into this game.

The Vultures thinking they had to seize the initiative kicked for the corner seeking to pile on the pressure but the fantastic Masters defence holds firm and they clear their lines with a high kick up the field. A great chase by the Masters puts pressure on the Vultures and the tide appears to have turned. The referee saw it otherwise and deemed that the Masters had taken the player in the air. The resulting penalty kick saw the RAF reassert themselves in the Army half and applied yet more try line pressure. 3mins after returning to 14men the Masters saw Army 7, LCpl Jotame Nalewabau, take a team yellow for constantly being offside.  Vultures kick for goal and extend their lead to 13-0 after 30mins.

With 10 mins remaining of the first half and the Masters back to 13 they needed a quick score to get back onto the board and address the RAF dominance. The restart saw LSgt Iggy Putty gather the ball, ride a tackle and quickly off load to SSgt Vasa Bai who was left with a relatively simple run to the try line and score the first points for the Masters, conversion missed – 13-5 after 31 mins. It was exactly what the Masters needed and kicked started the next 10mins of the most exciting rugby played by the Masters all season.

With the Masters now back to 15, the Vultures kicked to the Army and after a few phases of Army imposing their shape on the RAF the referee decided the RAF had infringed. A quick tap penalty caught by the Army saw the RAF unable to respond quickly enough and Masters 12 Cpl Ifereimi Vukinavanua broke through to go over and score which was converted by SSgt Dean Bradley closing the gap to within a point. 13-12 Vultures 35 mins.

With spirits raised and tails up the Masters continued to execute the shape impressed upon them by Head Coach WO2 Dean Lloyd-Christie. The scintillating combination of shape play and reacting to what’s in front of them saw the Army deliver another two trys in the last five minutes of the half. The Masters back line showing some excellent foot work with Sgt Unaia Balekinasiga breaking through the RAF defence to score in the corner which was converted by SSgt Dean Bradley taking the Masters into the lead 13-19.

The Masters fourth try came from the last play of the half which saw the Masters 7 LCpl Jotame Nalewabau power over the line from a scrum which was converted by SSgt Dean Bradley. Against all the odds the 1st half closed with the Masters extending their lead 13-26. 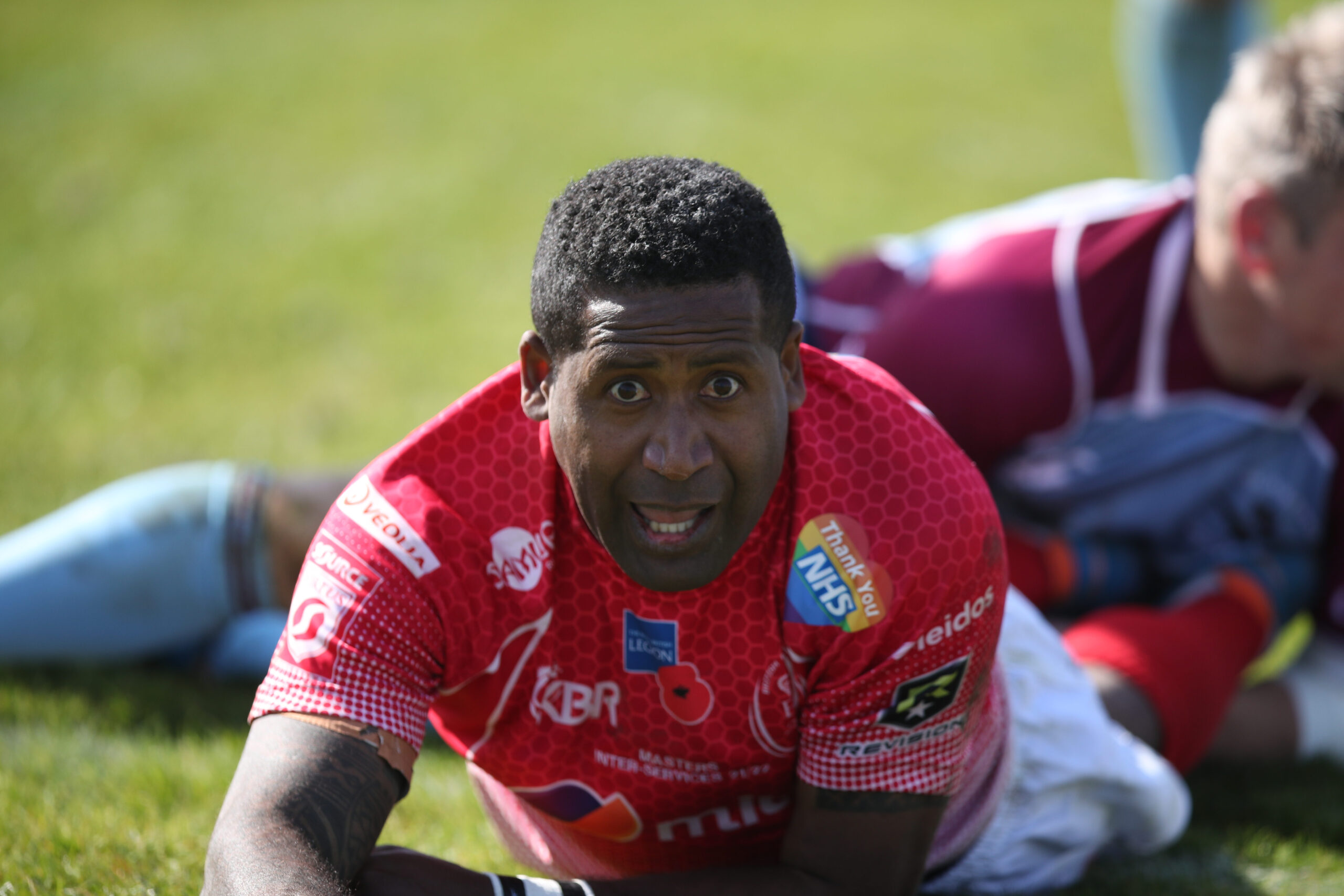 The Vultures looked shell shocked after the last 10 minutes of the first half and the second half looked like it was going to be a great battle.  To their credit the Vultures came out fighting and very much like the first half piled on the pressure.  With both sides making errors and the referee having to use the whistle a lot the fluidity of attack and defence never reached the heights it did in the first half but both teams showed great intent in both attack and defence. A Vultures penalty was kicked to touch but by now the Army had got the measure of the RAF lineout and the pressure on the RAF hooker saw him fold on the throw and the Army used the resulting scrum to clear their lines. The Vultures again attacked hard down the wing but a 50/50 opportunity for the Army Masters to intercept unfortunately resulted in the ball being deemed deliberately knocked on by 12 Cpl Ifereimi Vukinavanua resulting in a second yellow followed by a red, the Masters down to 14 for the rest of the game.

With both teams making changes, it wasn’t long until the Vultures made a break down the nearside. Trying to force width on the ball it enticed Sgt Perceli Nacamavuto to attempt the intercept however the result was deemed another deliberate knock-on and a 10min rest by way of yellow card. With the Masters down to 13 again, the Vultures centres made the extra men advantage count as they broke through a tiring Army defence to score under the posts.  The try was converted, and the Vultures closed the gap to within six. 20-26 Army Masters 69 mins on the clock.

With just over 10 minutes to play and the Masters back to up 14, the Vultures threw everything they could at the red wall in front of them. Despite what the Vultures resilient efforts the resolute Army defence was not to be breached. They even had the energy to threaten the RAF line on several occasions and were unlucky not to be rewarded with a try. With only seven points being scored in the second half and the Masters having 14 men on the park for most of the game this was a match that was won by the Masters standing side by side, putting their bodies on the line, making every tackle count and seizing every opportunity they could to convert possession into points. The final whistle saw 30 plus players out on their feet. An excellent game to watch and a real credit to the coaches and players. 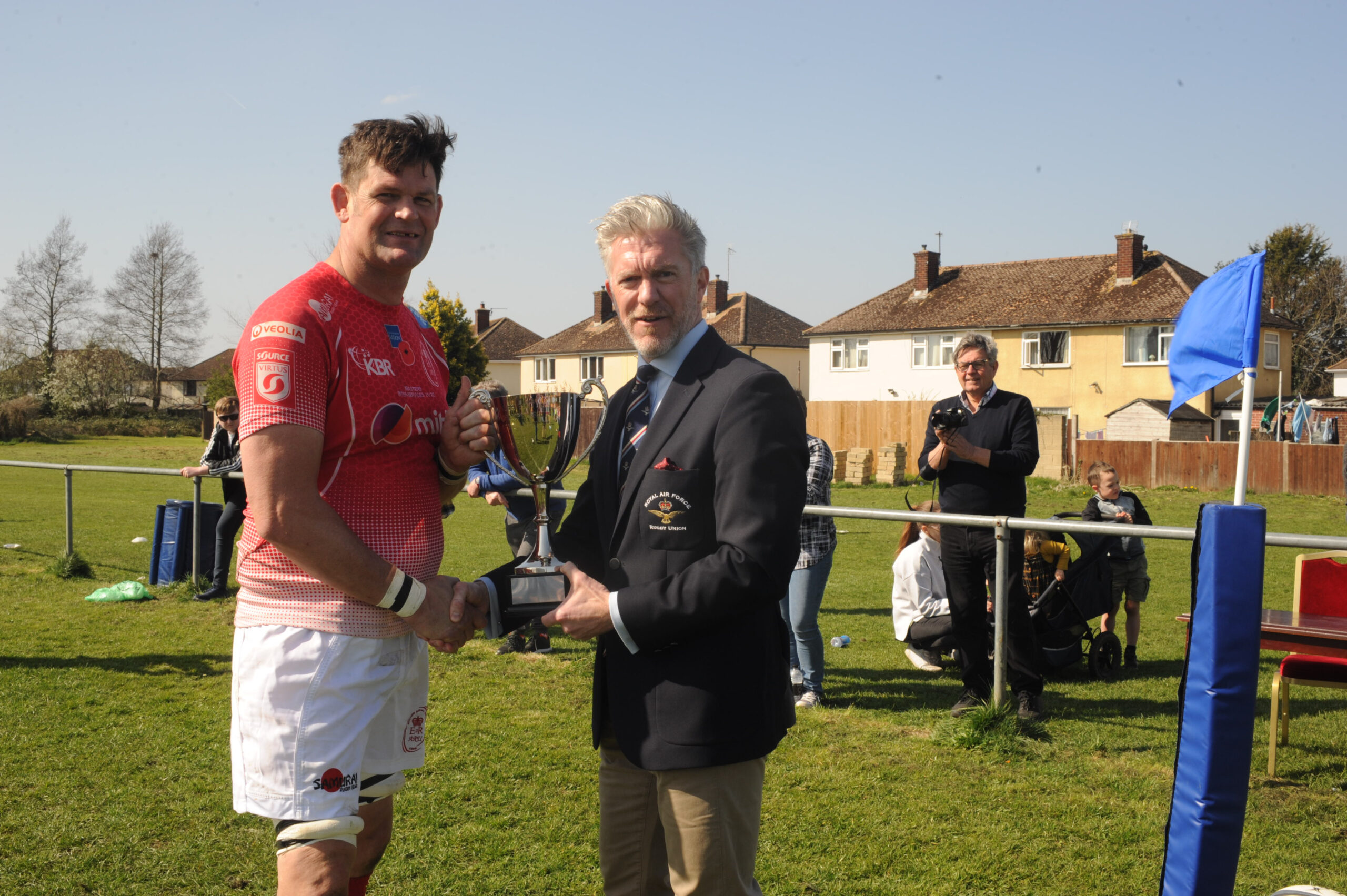 Army Masters Captain SSgt Ben Butler was presented the winners trophy from Air Commodore Rose and with that the Masters have one hand on retaining their Inter Service Crown.

A big thank you to Old Richians for all the hospitality shown to both teams and the Masters wish you all the best for the future. 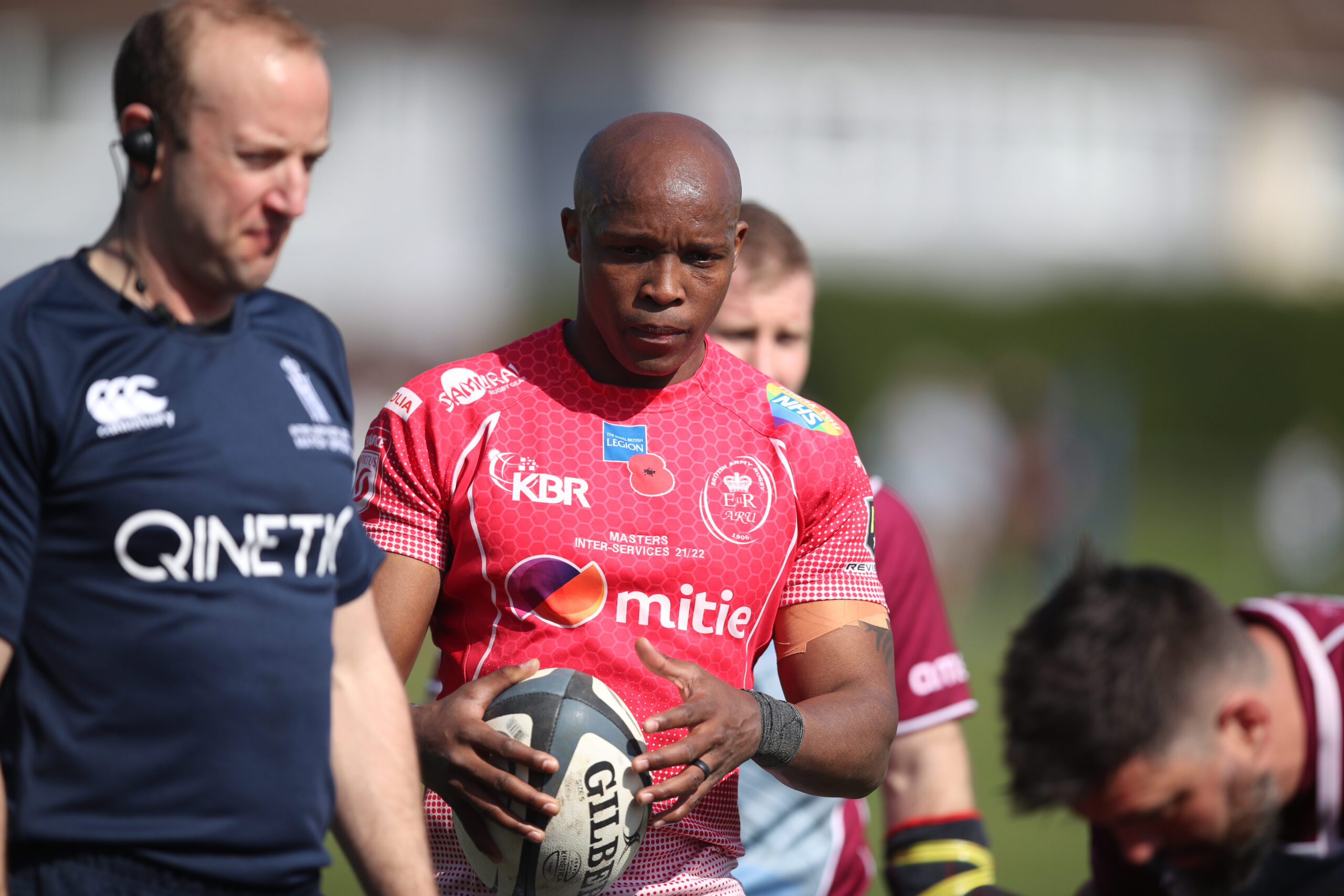 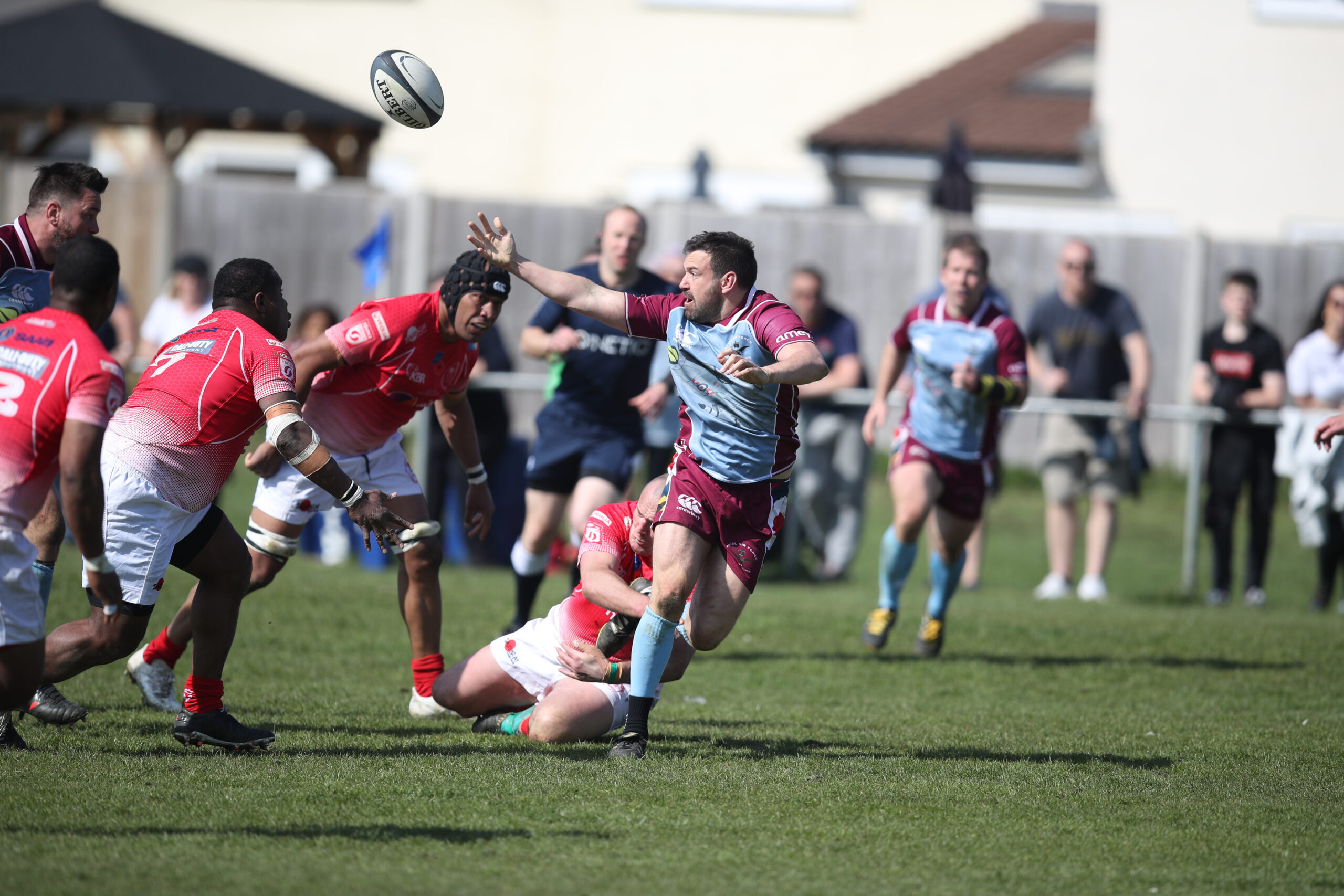