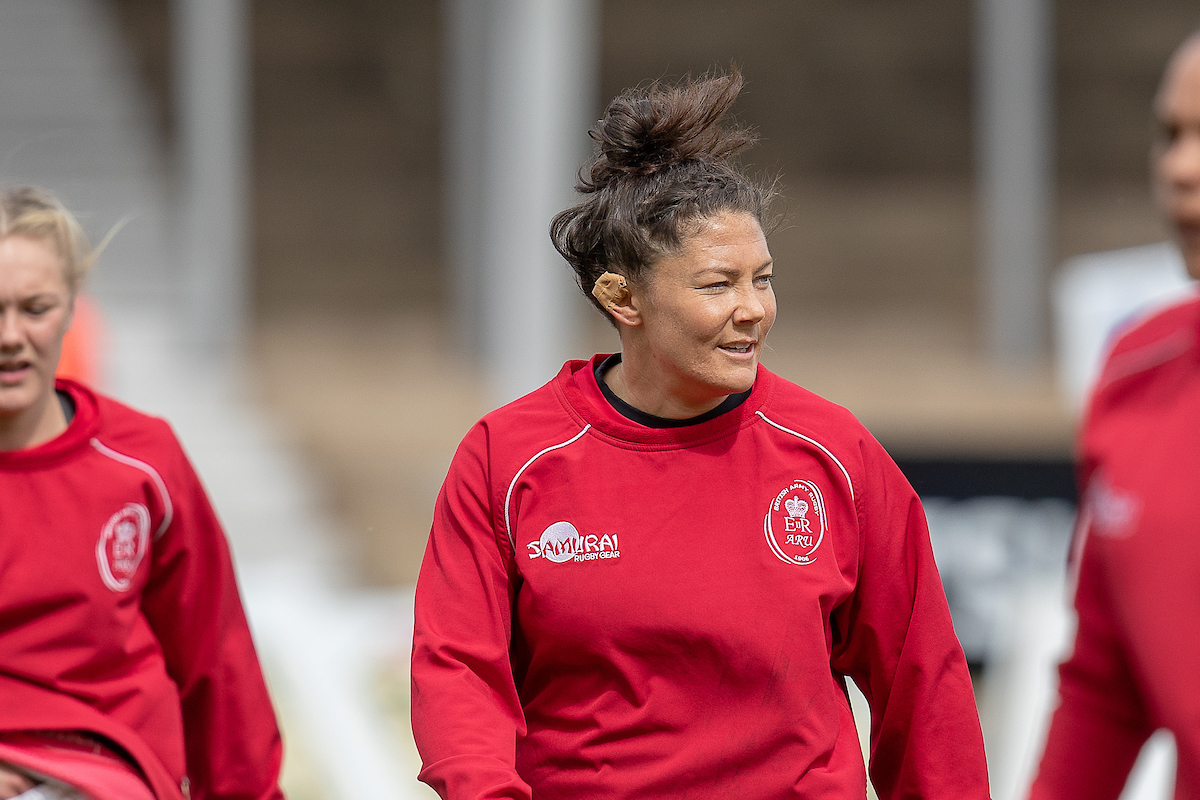 By Kimberley FowkeMarch 26, 2021No Comments

Spring is a time for new beginnings, which for Capt Gemma Rowland (Royal Artillery) has taken on a meaning all of its own over the past few weeks.

Not only did the Army Senior Women centre receive another call-up into the Wales Women’s Six Nations squad but she also confirmed a domestic change of clubs, too, switching from Wasps to the newly-established Bristol Bears set-up.

Combined with a dramatic reduction in travel and more ability to dedicate to family and personal time, and all of a sudden you have a 32-year-old who is admitting to a new lease of life when it comes to her sport.

“It all happened at once!” she says. “I’d already been training with the extended Wales squad just before Christmas. There are a lot of Welsh girls playing in the Premier 15s and the new coach wanted to have a look at. Then I got announced in the Six Nations squad.

“My family are all based in Bristol, and with working from home my life was pretty much based in and around Bristol, Cardiff and Newport, other than driving to Wasps. And with everything else that’s been going on with the pandemic, and with work being really busy as well, I’d be getting into my car at 2pm for training which started at 7pm. Every time I’d get in the car I’d be exhausted, and that was before training for two hours and then driving back.

“So I spoke to Giselle [Mather, Wasps coach], who I’ve known since I was 18 years old, because I knew I wasn’t giving my best performances in training for Wasps. That weighs on your mind, and when you’re also chasing the dream of playing international rugby – and I’m not the youngest any more! – you need to do everything to put yourself in the best position on the field.” 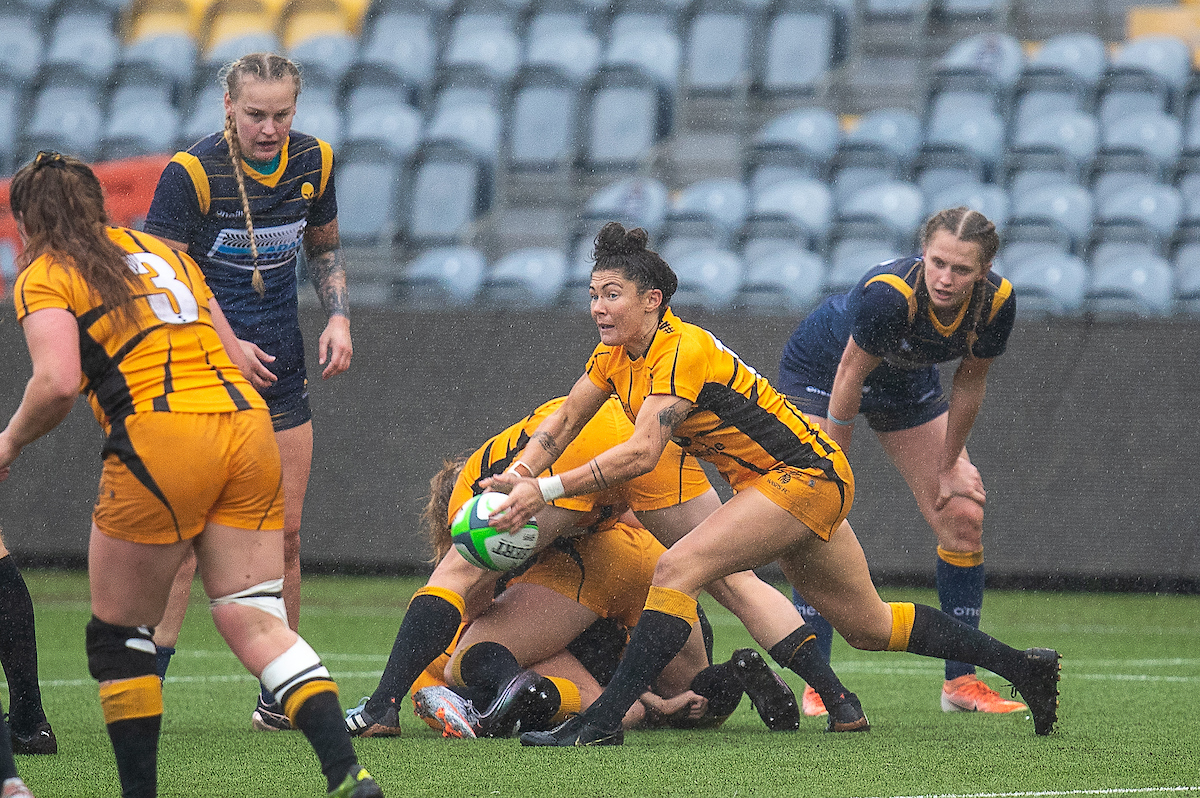 Capt Rowland has long been one of the more recognised players within the Army Women’s set-up, having been a regular with Wales since 2015, playing in the 2017 Rugby World Cup and 2018 Commonwealth Games on the Gold Coast.

Throw in eight seasons at Wasps and captaincy of both the Army 15s and 7s and you have one of the most experienced players in the Women’s game. However the hours on the M4 were beginning to take their toll, with Capt Rowland admitting that she was “getting further away from giving my best performances as an athlete”.

In years gone by there would have been little option, even despite the postings in Andover and Larkhill which were closer to Wasps’ west London training base. However with Bristol Bears Women also in the Premier 15s Capt Rowland has used this opportunity not just to get more game time ahead of the Six Nations (not to mention getting to bed at a reasonably time!) but also to pass on her knowledge and experience from her years in rugby and leadership within the Army onto a new generation of player.

“When I spoke with Tom [Lindsay], the head coach, before I moved across, my leadership experience and what I’d learned with Wasps having gone through the same journey a few years before, he was interested and keen that I brought that across to Bristol,” she says.

“In the first couple of weeks I didn’t want to tread on any of the established leaders’ toes as the new girl on the block. I’m not the kind of person to stand out in front and shout, either. I prefer the small chats with players for the one percent effects, and Tom’s also keen to understand what he can deliver differently as a coach. He’s a new head coach and I’ve worked for years with one of the most experienced and established coaches in the country, and that’s good for me as an individual to pass on that knowledge.

“It is exciting and where my fulfilment in rugby comes in. Obviously I still want to play in a World Cup and finish my international career on a high, but now it’s also coming back to what I can give to the sport. Rugby’s given me so much, in personal growth, development, opportunities, and the people you meet along the way, and now I want to give something back to the next generation.

“That’s very much what Bristol is trying to establish. Pat Lam came to see us and talk about what the vision is for Bristol Bears Women moving forwards. Culture was a huge part of it and Bristol does have that very good culture. Wasps and Bristol are aligned in their values and there’s a family feel to both clubs. So it’s nice in a way that I’ve made a transition to a new club but in a way it’s also familiar.

“There’s now the drive to grow the playing standards within that culture. Bristol has been unfortunate with a large number of injuries this season, with eight or nine players out of the starting line-up, which makes a huge difference to any team. But that’s also opened the door to younger girls to have the opportunity of being in a match day 23 in the Premier 15s. Moving into next season you then have a larger squad of players with experience at the elite level, and provided that Bristol retains all those players then this could be a springboard into the future.”

With the Bears’ men leading the way in the Premiership and with a European trophy in the cabinet inside the last 12 months, the club is one of the most exciting places to be in the country right now, and this is also inspiring the women to set their sights on the future.

“The whole Bristol Sport franchise is an amazing thing to be a part of,” Capt Rowland says. “It’s amazed me to come into Bristol Bears to see how well its resourced. That’s not always the case in the women’s game. But at Bears it’s different, and even just having Pat Lam come to speak is huge, because it shows that they value the investment. They want the men and women to be Premiership champions, and it makes you feel valued as a squad and included, and adds to your motivation to be better as an athlete.”

This renewed vigour has also extended to the Wales squad, under the leadership of new head coach Warren Abrahams ahead of the truncated Six Nations.

“As athletes we’ve been training constantly and the minute you then have a fixture you get your motivation and inspiration to train harder. Now in the Wales squad we’ve got something to aim for and I think that they’ve planned these games is great.

“There is the flip side that the men are having a full Six Nations and we’re not, but the fact they are doing something for women’s rugby and that they’ve moved it as a separate entity with its own spotlight will be a good thing, as long as the media use this as an opportunity to promote women’s rugby and women’s sport.

“Warren is a great coach as well, very player centred. The sessions challenge you, and even at the age of 32 I leave every session having learned something. It might be a one percenter or a micro-skill, but he picks up on things where I can be more effective, and to have a coach who’s that in tune with his players is incredible. It makes you excited to be in that environment.” 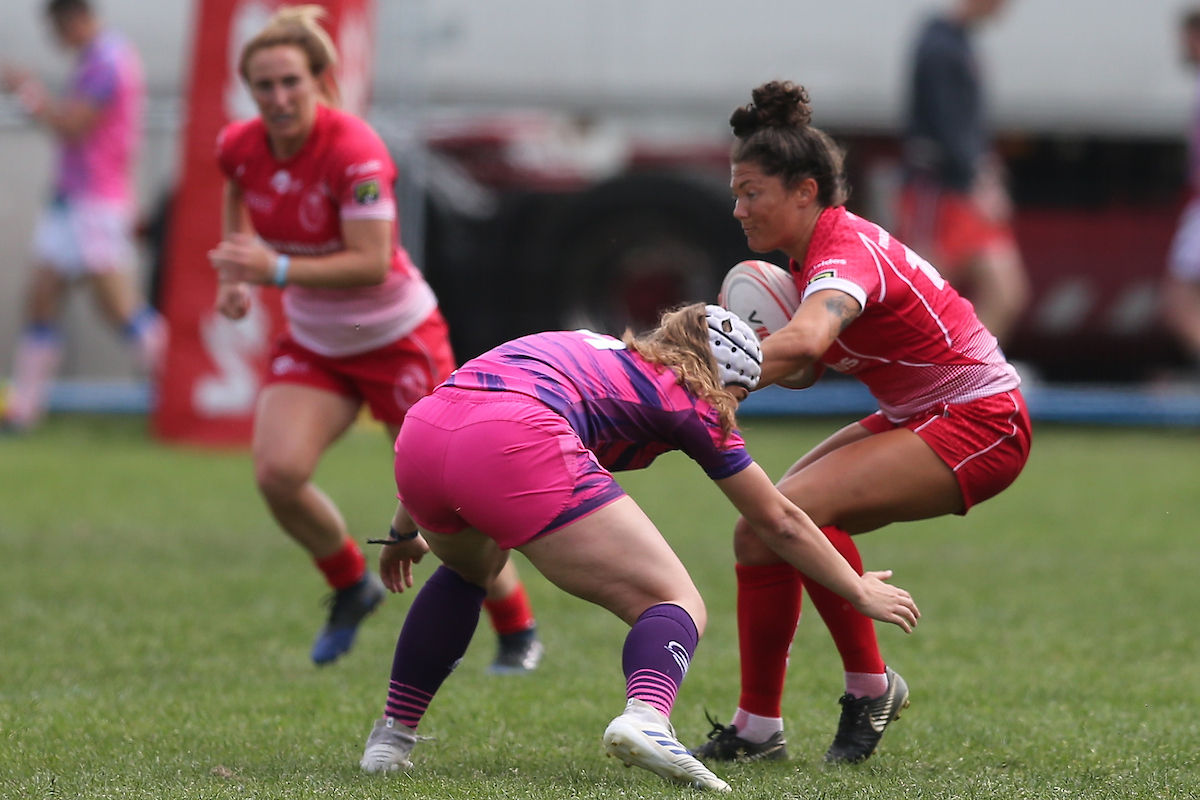 Gemma in 7s action for the Army at Bournemouth in 2019 with Wales and Army team mate Bethan Dainton in support.  Image – Alligin Photography © Scrumpix

Joining Capt Rowland in the Wales squad is Bdr Bethan Dainton, who is not just an international and Army team mate but also a fellow member of the Royal Artillery.

The support also includes from Capt Rowland’s direct chain of command, without whom, she says, her rugby achievements may very well have been more limited.

“The support that I’ve had throughout my career to pursue those goals, to get to a World Cup, to get to a Commonwealth Games, and now to go through the process again, has been brilliant. For example, as soon as the news came out that the World Cup was going to be postponed, I woke up to a message from my boss asking me how I was and saying that he hoped I was still chasing the dream for the next 12 months. I replied saying ‘only if my boss will let me!’ and he replied to say that he was behind me 100 percent of the way. 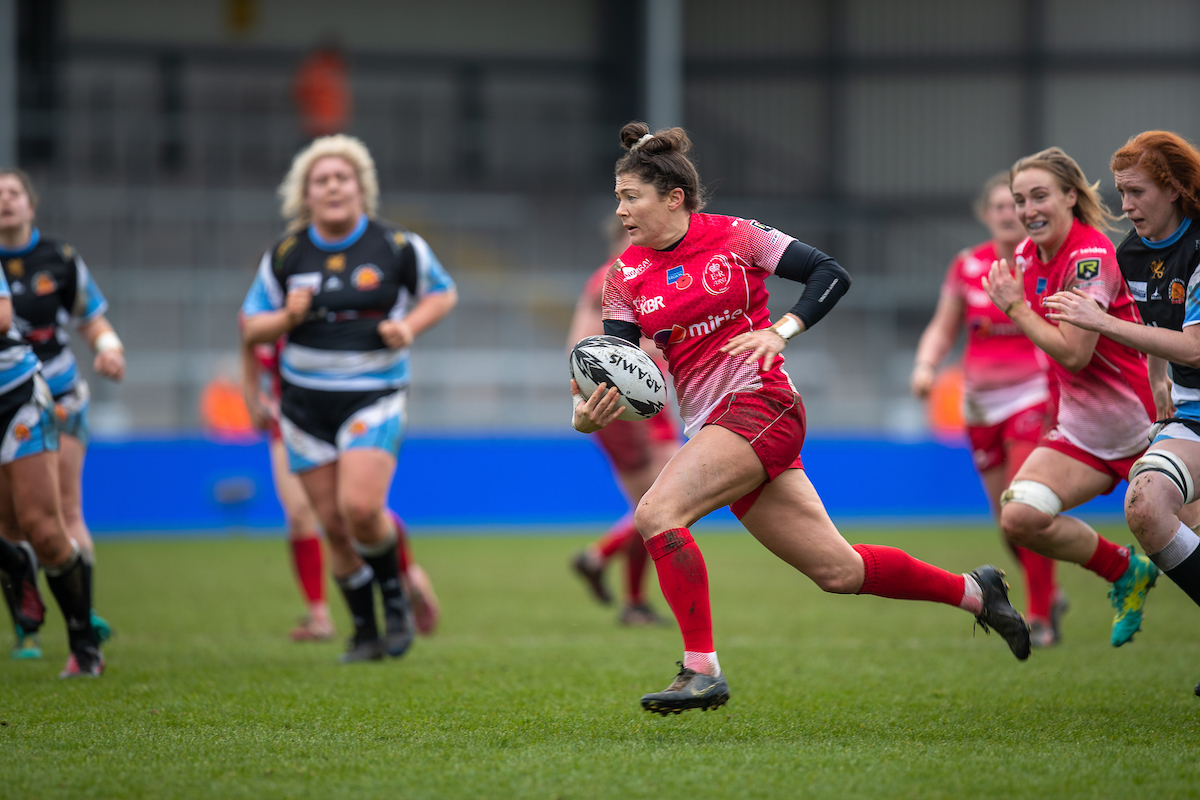 Gemma on the attack for the Army v Exeter in March 2020, the last match for the Army Women before sport was suspended due to the Covid-19 global pandemic.  Image – Alligin Photography © Neil Kennedy

“That is a weight lifted off your shoulders when your chain of command understands your time constraints outside of the office. We have a very open communication policy and my chain of command has always had a flexible approach, provided my work gets done to a high standard.

“They tell me that I’m an officer and if they can trust me to lead soldiers in Afghanistan then then can trust me with my time management. That relieves the mental and emotional strain, and knowing that I can speak openly and honestly if I’m exhausted, such as when I was getting home late in the Six Nations.

“If that’s not an example of an employer being absolutely amazing in supporting one of their employees achieving their goals then I don’t know what is.”

The experiences in Afghanistan may be a decade old, but they have clearly left a mark, both in life and in rugby.

“One of the biggest lessons I learned in Afghanistan was to trust your training,” Capt Rowland says. “Your instincts will naturally give you the tools you need to survive in a situation if you’ve done your training right. You are trained for every potential scenario you could face, and when something happens the mind naturally kicks in. All of the emotion, the panic or dread which people think they’ll experience in a war zone doesn’t exist because you’ve got the instinct imprinted on your brain.

“I was then able to transfer that onto the rugby field, and then trust my instincts more. As an outside back there’s so much space and so many options, I would second guess myself and end up carrying as my default. So I wasn’t maximising my potential of releasing the wingers. So it made me trust my instincts on the field as to whether I could make that pass, or that break, because I’d been trained to do it.

“It gave me a new lease of life as a player, and was my biggest lesson, which I wouldn’t even have considered to be a component of deploying. Then there’s the mental resilience and confidence in yourself from the seven months – I’d bounced from being a university student to Sandhurst to pre-deployment training to Afghanistan at the age of 22 with no life experience.

“I grew up a lot and got a good understanding of where my skills lie in developing relationships with people and in helping people.”