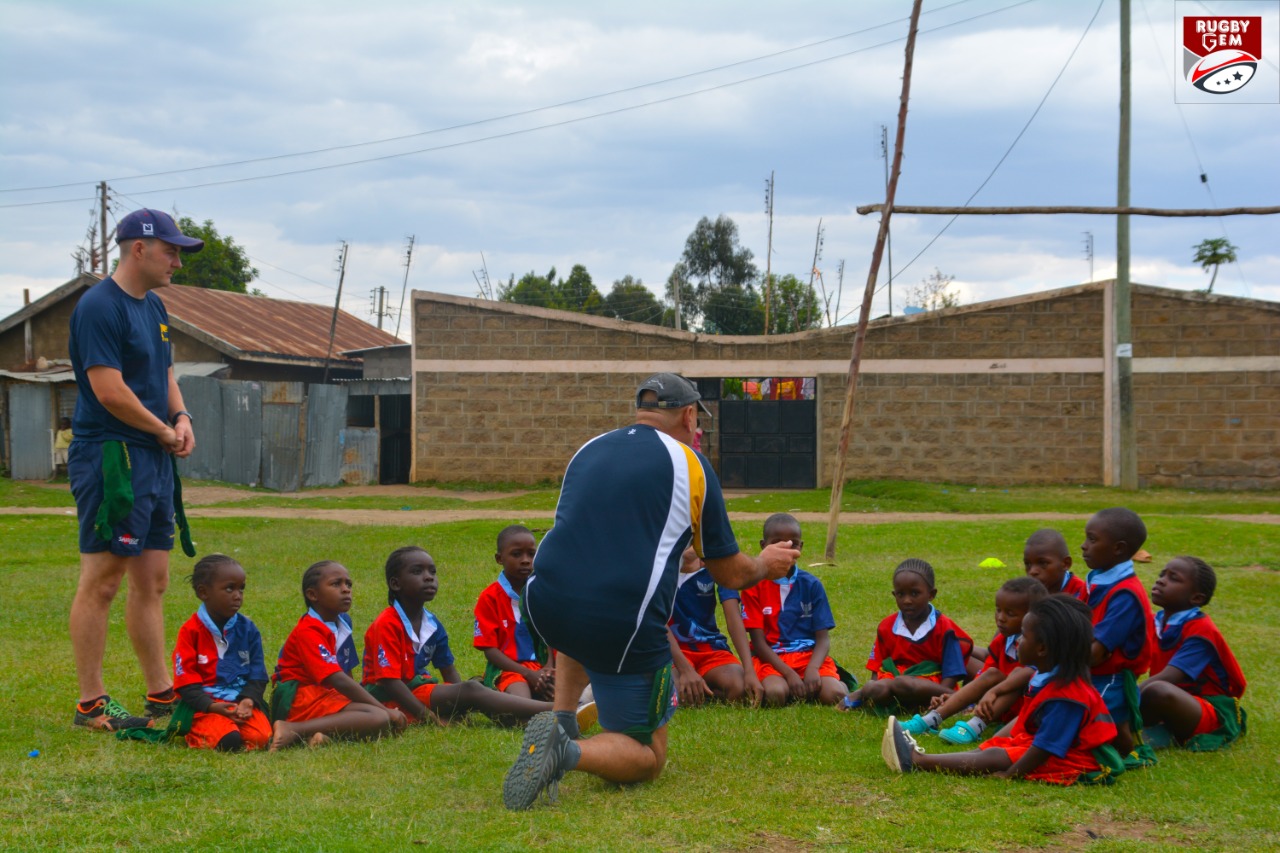 That is some assessment coming from someone who has been involved in rugby for nigh-on 50 years as a player, coach and organiser. But for Maj Richie Crane MBE (BATUK), the last three years has given him the opportunity to use the sport to make a tangible difference to the lives of some of Kenya’s least fortunate children and young people.

Located three hours’ drive north of Nairobi, Nanyuki is about as rural as it gets, far away from the glamour of the Autumn Internationals and even the formal structures of the Kenyan Rugby Union.

But it has become a hotbed of rugby, not least thanks to the strong connections between BATUK and the local community, spearheaded by Maj Crane and Dennis Gem, one of BATUK’s local employed civilians (LEC).

Since Maj Crane was posted to Nanyuki in 2018 the duo have built up a strong relationship and their rugby sessions have gone from strength-to-strength. And while he was no stranger to either rugby or Africa – thanks to a two-year posting in South Africa immediately before heading to BATUK – the work being done is having as much of an impact on Maj Crane as it has on the hundreds of children.

“The kids are absolutely phenomenal,” he says. “They come from several orphanages and walk for an hour to have an hour’s rugby and then walk an hour back again.

“Developing the rugby with the kids it has been absolutely pivotal and working with Dennis has just been phenomenal. We’ve done a lot in this time and it’s been great.

“He’s a phenomenal guy and if he could be recommended for an MBE I would. He gives up so much of his time.” 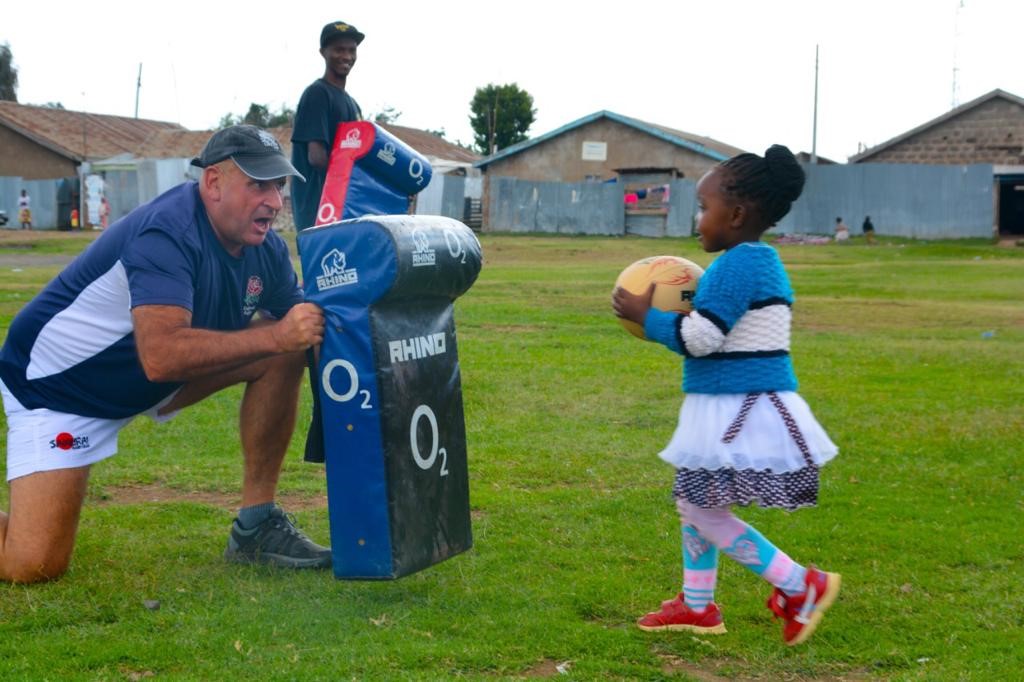 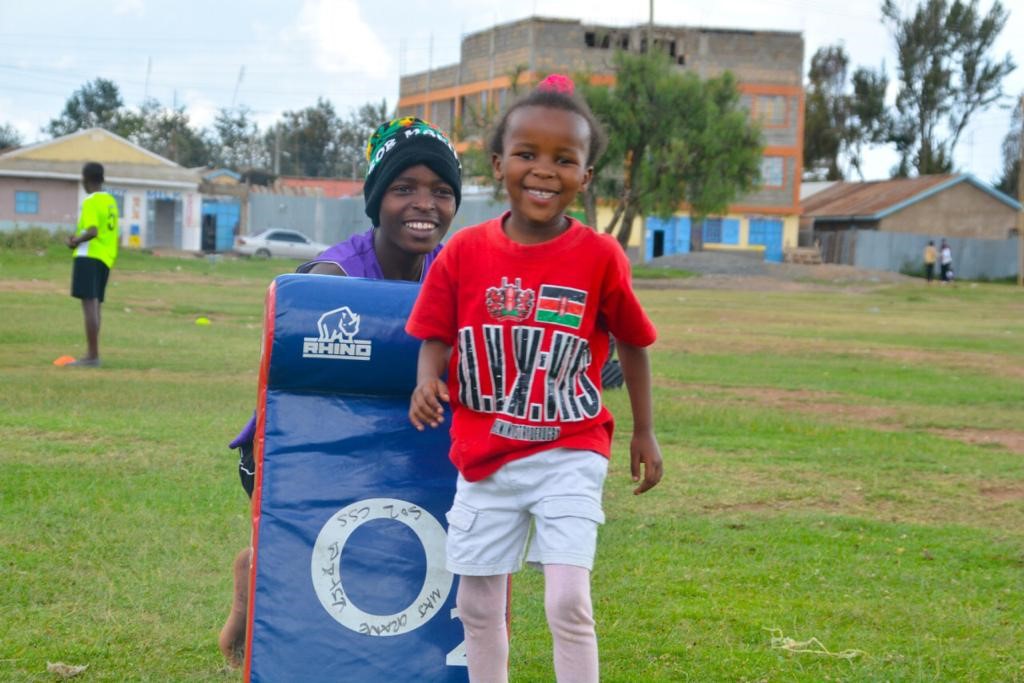 For those personnel freshly arrived from the UK or elsewhere, conditions are a long way removed from what is seen back at home, with an open ground pitch that more that fits the definition of ‘multi-use’ across the whole community, and posts made from three wooden poles which have only recently received protector pads thanks to a donation from Richmond RFC.

Not that any of this stops the sport.

“Dennis has got a number of balls and kit that’s been donated by other people, which is stored across the community,” Maj Crane explains. “Some kids bring balls, someone brings tackle shields, someone brings cones. It’s a true effort from everyone involved.

“Then to see the kids run in bare foot or in crocs, and the turn of pace they have, the hands, the enthusiasm, it encourages you to keep wanting to do more and more. Last Sunday we had a few new kids turn up who hadn’t played rugby before, and we threw them a ball and by the end of the session they were joining in with the rest of the group.

“So from BATUK’s perspective we make sure that we take fruit and water as well as our coaching gear and staff because otherwise they would have nothing to eat or drink around the rugby.

“It’s been up and running because my one of my predecessors was involved with it, but it only becomes successful when you’ve got somebody who not only likes rugby, but is happy to get involved. One of the guys who had been here before had been helping, but it dried up once he left.  We help to fund taking the kids down to the coast for a beach rugby tournament and get them involved in other little tournaments. This will always be supported by BATUK, but it’s also dependent on the enthusiasm of the people in post.” 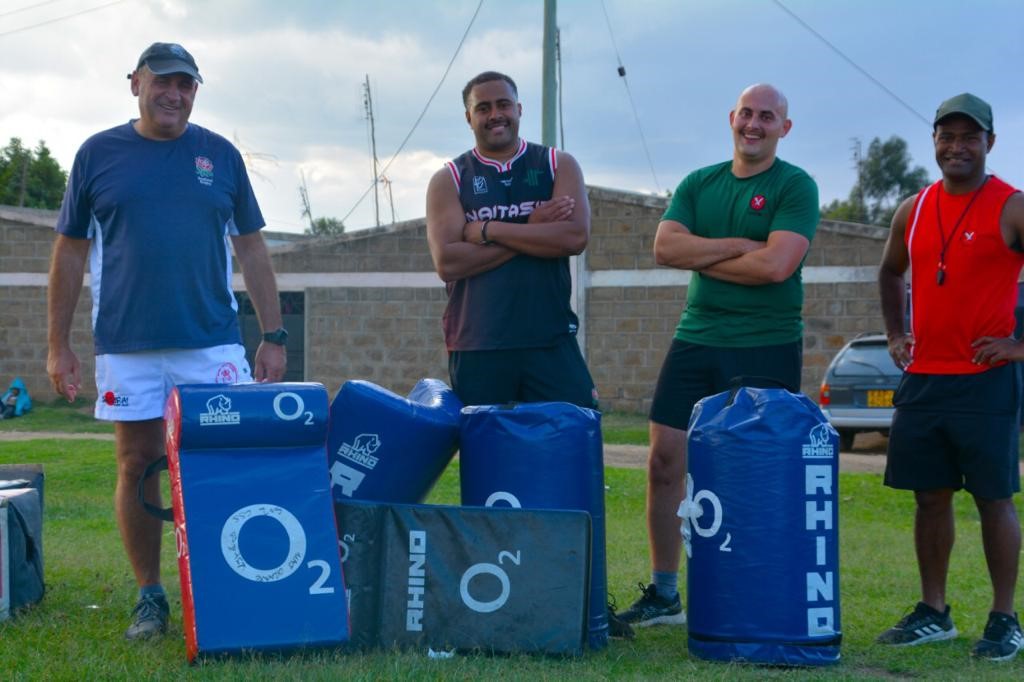 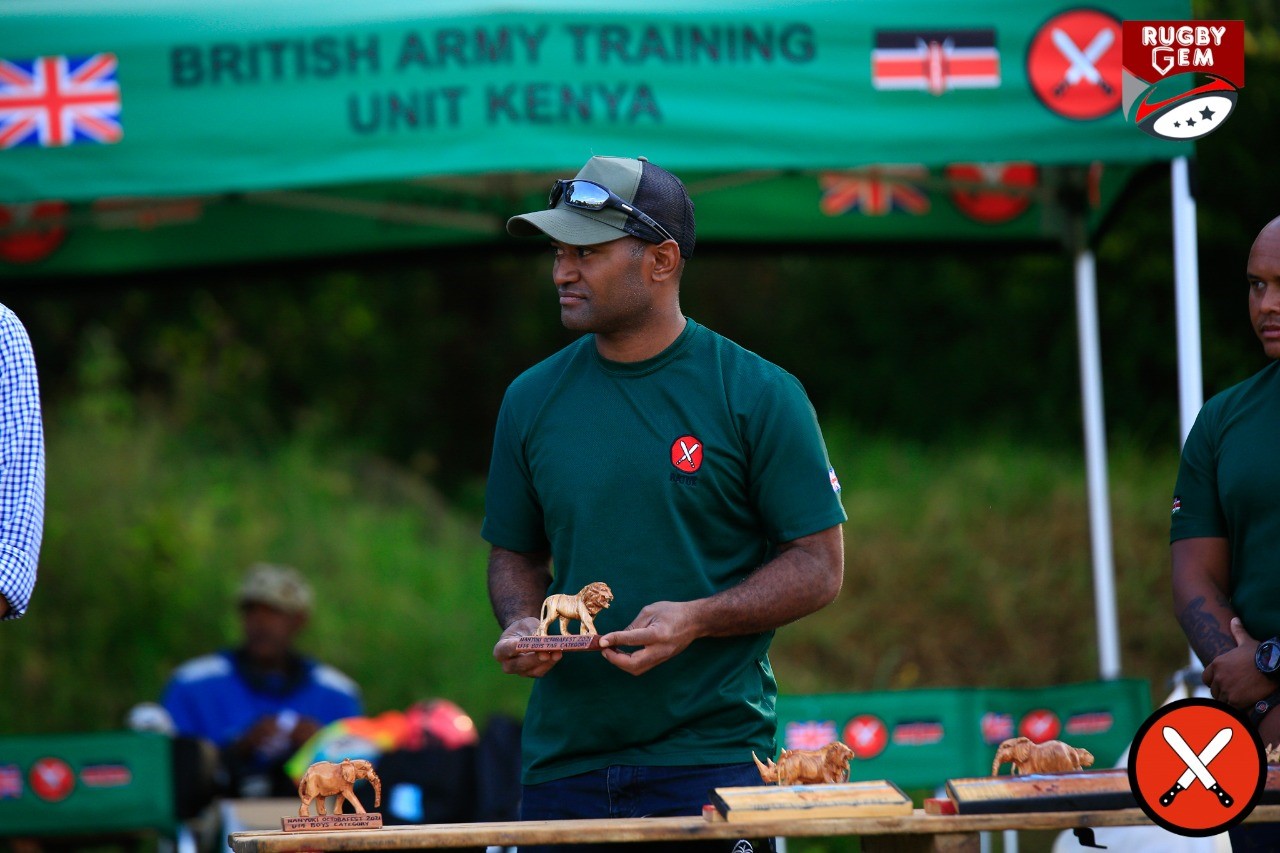 BATUK is the biggest employer within Nanyuki, either with direct LECs, or external service providers such as vehicle repairers. But the relationship between the Army and local community is much more holistic than simply monetary, according to Maj Crane.

“BATUK community engagement is a massive thing,” he says. “You get that right, it builds relationships, and people can look at the good that BATUK does. When we’ve got engineers on Exercise they’ll go into schools, sort out sewage works, put in water pipes and raise money that we then put back into these less privileged people.

“We get our LECs involved in sport, we get them involved in PT, we provide them with a with a job which then puts them and their families into a better position. On the back of what we’ve been doing with rugby we’re developing something similar with football. My new commander is picking my brains on how we’ve worked over three years to develop the rugby. What we’re trying to do now is to find somebody in the local community who is as willing to get involved with football as Dennis is with the rugby.

“But it takes time. You have to plant a seed, gain the trust, and then it’s a bit of a ‘Field of Dreams’ moment where “if you build it, they will come”. The first training session might be a dozen people, but when others hear how good it is then suddenly you have 40 or 50 and are unfortunately having to cap the sessions so it doesn’t become unworkable.

“The three commanders that I’ve worked with in the three years have all been very much on side. The current Colonel, Duncan Mann came along to the Oktoberfest, and was there throughout the day to watch some rugby, speaking to people, getting involved with the kids and then presenting the trophy.” 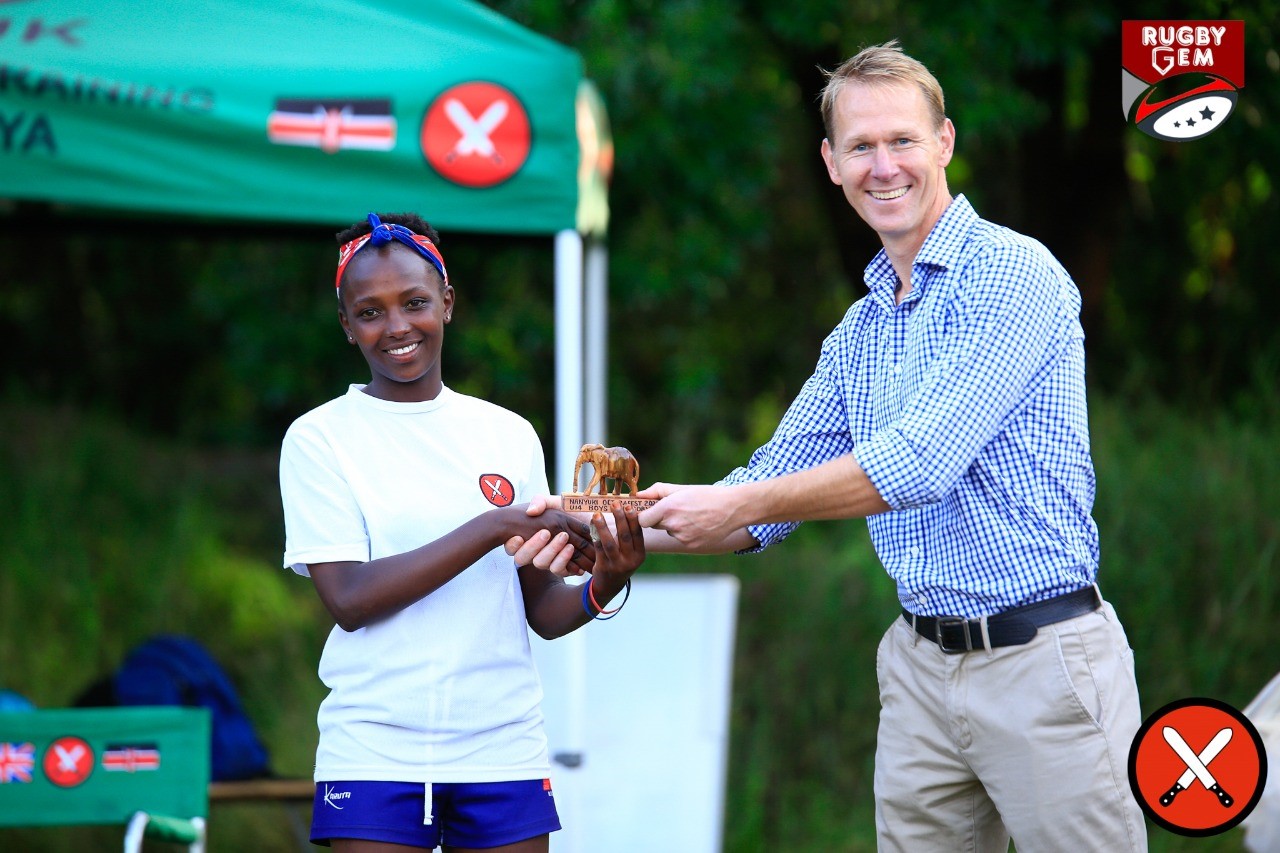 This also extends into the BATUK and local civilian teams sharing playing resources.

“Because a lot of the kids go off and do education they only get a few games,” Maj Crane explains. “So while the Nanyuki Jackals enter a league playing other universities they can struggle for players. When that happens we register BATUK players to play in the team. We also play as a BATUK team, but the number of players we have available is dependent on who’s in the country.

“Sometimes we’re purely a military team, sometimes it’s purely civilian, sometimes it’s a mixture – the important thing is that we’re playing rugby.  Whenever we play Dennis will always bring the younger kids along so they can watch a proper game.”

The inspiration of watching the adults and being on the receiving end of the support and coaching is paying off on the field for the youngsters, with Nanyuki’s girls in particular shining on the national stage. Some of 15-16 year olds play in an U20 ladies league and are on the verge of selection for Kenyan national team, benefitting from the coaching which comes from personnel who come to BATUK, whether on temporary duty and on exercise, and every session and donation is welcome.

“Clearly they are predominantly here to exercise, but having been around Army rugby for a number of years we’ve already identified who the right people will be,” Maj Crane says. “Plus when we find out who’s coming out we can tap them up to bring some kit out with them. I’m never short of people who want to play.

“The guys who come out are engaging with this early, some coming out to play, and while they might not be qualified coaches we use their experience from playing and their enthusiasm to be involved and utilise them wherever we can.

“We’ve got a group from Kinloss who are going to present some Under-7 and Under-14 kits from Kinloss RFC, and I had a box arrive recently from East London rugby club, which is my son’s rugby club. They have sent out some strips which are about to go to Uganda, where we are sending two Sevens teams. 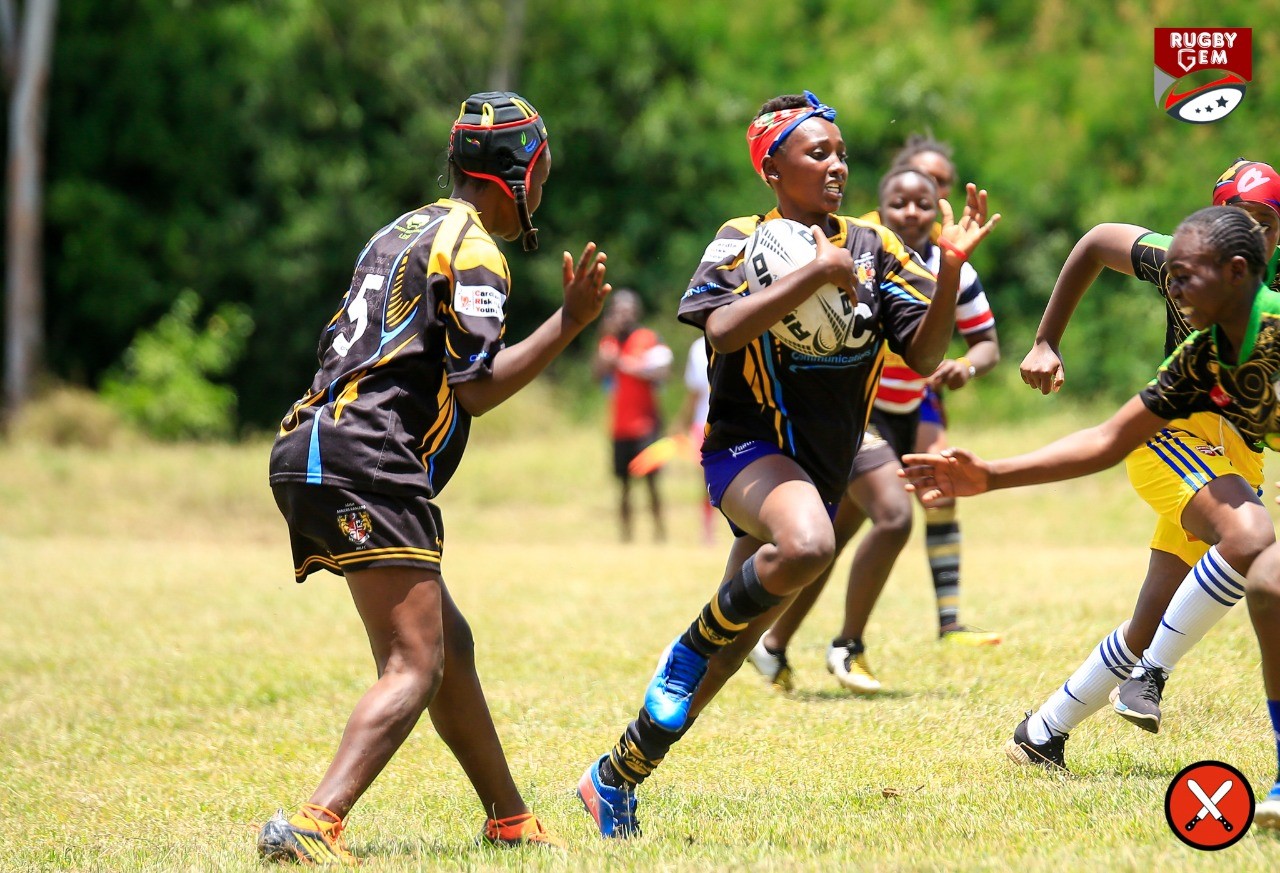 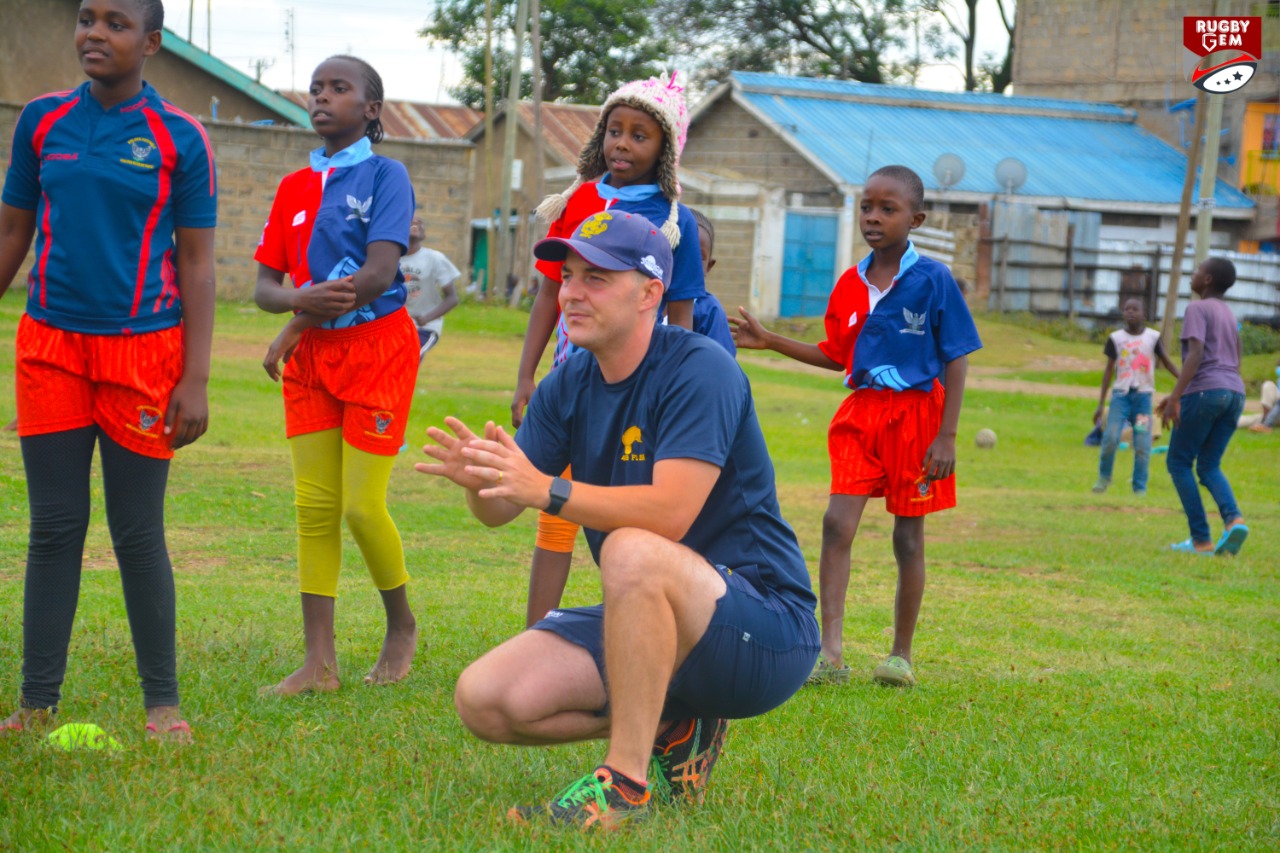 “So East London rugby club will be representing BATUK via the Nanyuki girls down in Uganda! The kids are so grateful for any strips we can get, and it’s fantastic.”

Maj Crane’s posting comes to an end in February 2022, and he says that whoever takes up the mantle will not regret it.

“I love bring involved with it, I love seeing the benefits for the kids and the development. I find it very fulfilling and getting some of the other guys involved in it, and hopefully we can find someone who can continue what I’ve been doing with Dennis once I leave next year.

“I love being involved with it, and I think if I hadn’t been involved I would have left BATUK a disappointed person.”

Donations can be sent to Maj Crane via BATUK.