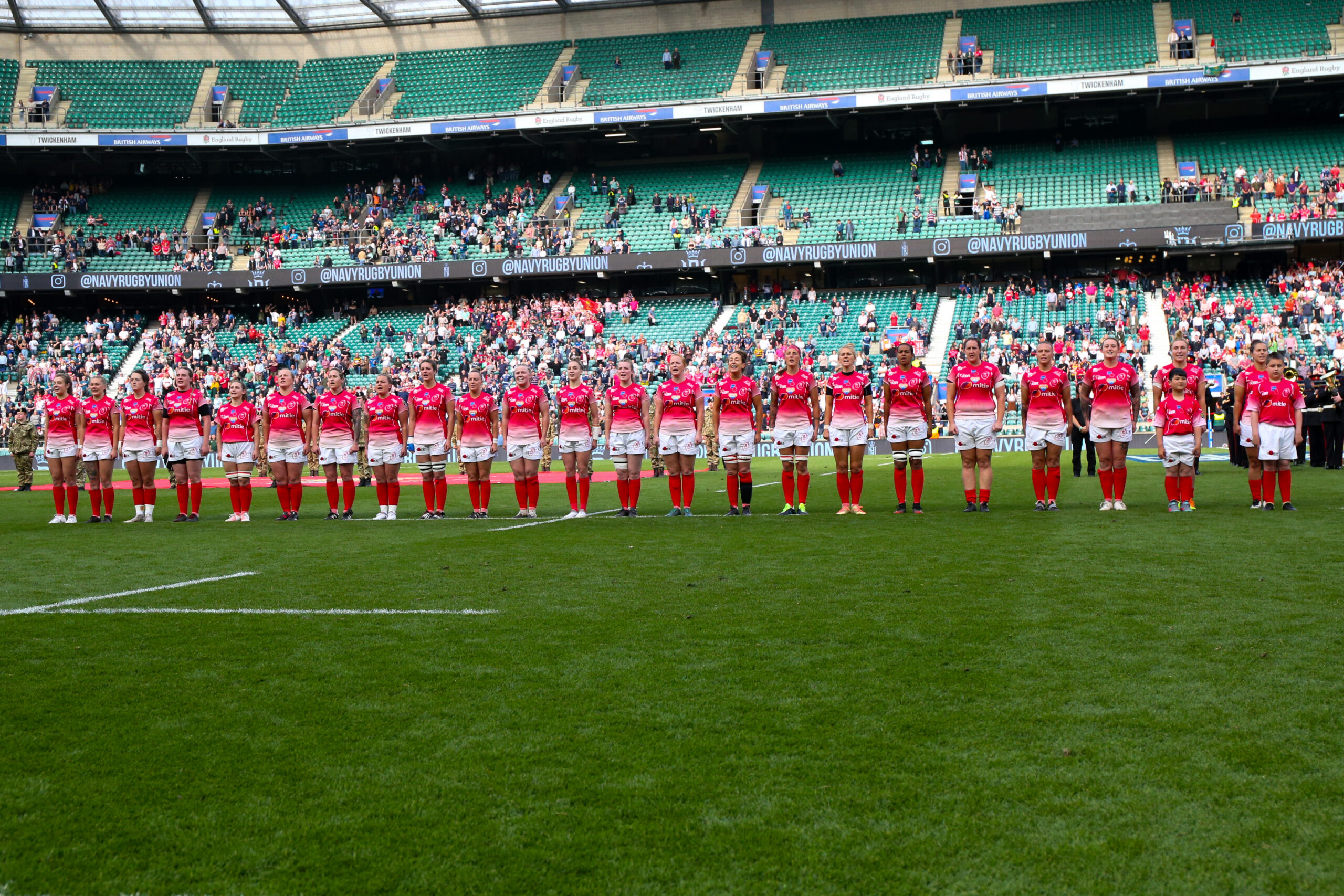 The Army Women completed the Inter-Services Championship clean-sweep for the red shirts with a dominant performance against the Royal Navy at Twickenham.

With the crowd still buzzing following the thriller served up by the Men just 45 minutes before, it was nevertheless still fantastic to see thousands of supporters stay in their sun-drenched places to witness this piece of history as the teams ran out for the first ever Women’s Army Navy match at the home of England Rugby. 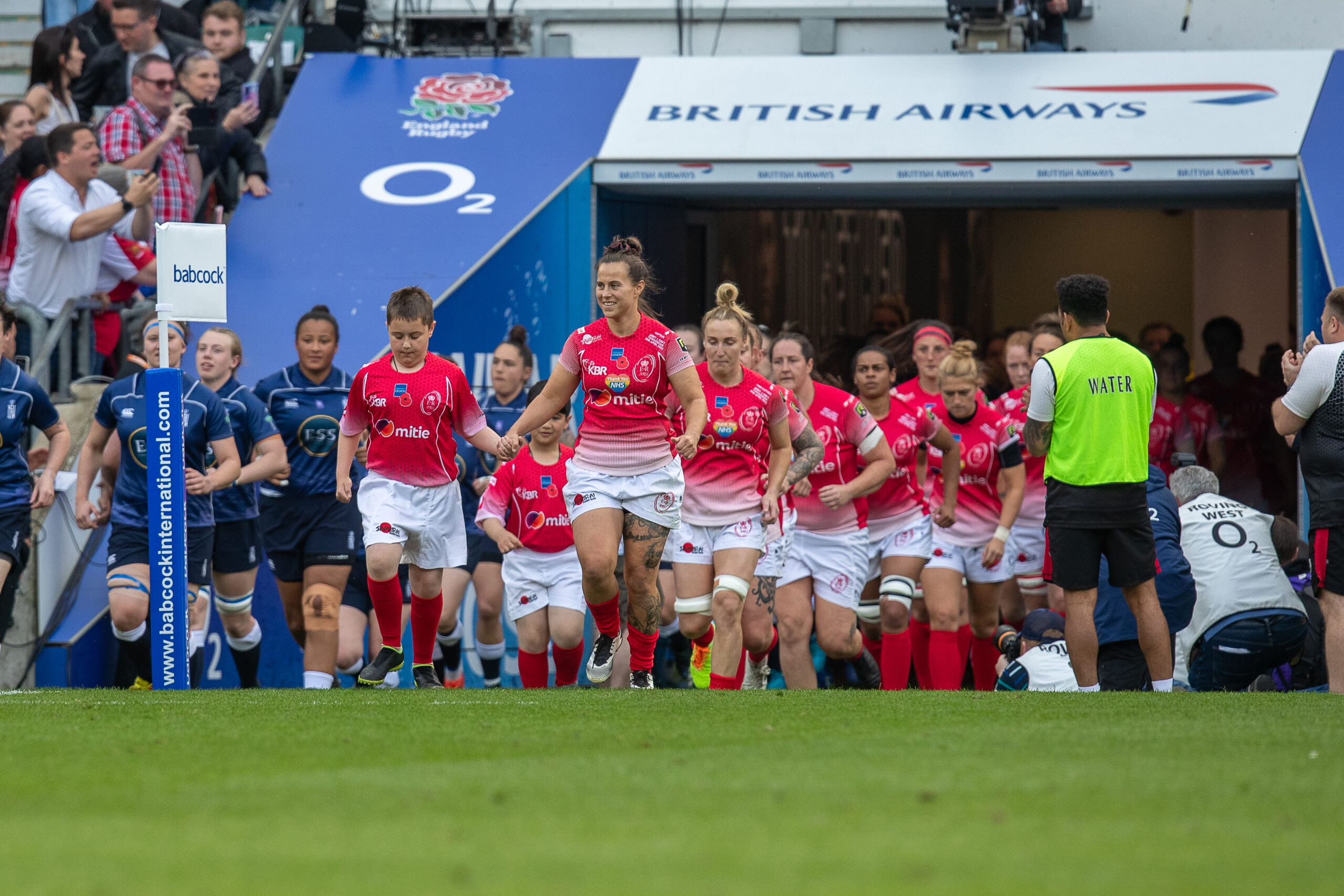 A historic moment as the Army and Navy women’s teams take to the field for the first time.

If any nerves had been brought from the Kingsholm clash with the RAF they were quickly settled at Twickenham, the Army opening their account with just five minutes on the clock.

Sgt Louise Dodd (QARANC) took a mark and set off upfield. The run took the full back 50 metres upfield, and the red shirts followed this up with wave after wave, Bdr Bethan Dainton (RA) working play infield to set up the position from which Lt Sally Stott (RAVC) eventually crashed over.

With Pte Courtney Pursglove (RLC) adding the conversion the Army had had the start they needed, and while the Navy had a spell of pressure straight after the try it was not long before the red shirts had doubled their lead.

Forwards and backs combined superbly to take the team forward through phase after phase, with Maj Chantelle Miller (AGC (RMP)) to the fore. But to highlight one player would be doing a disservice to the other 14, and when Sgt Dodd stepped inside a defender before sprinting to the line the collective celebrations were justified. 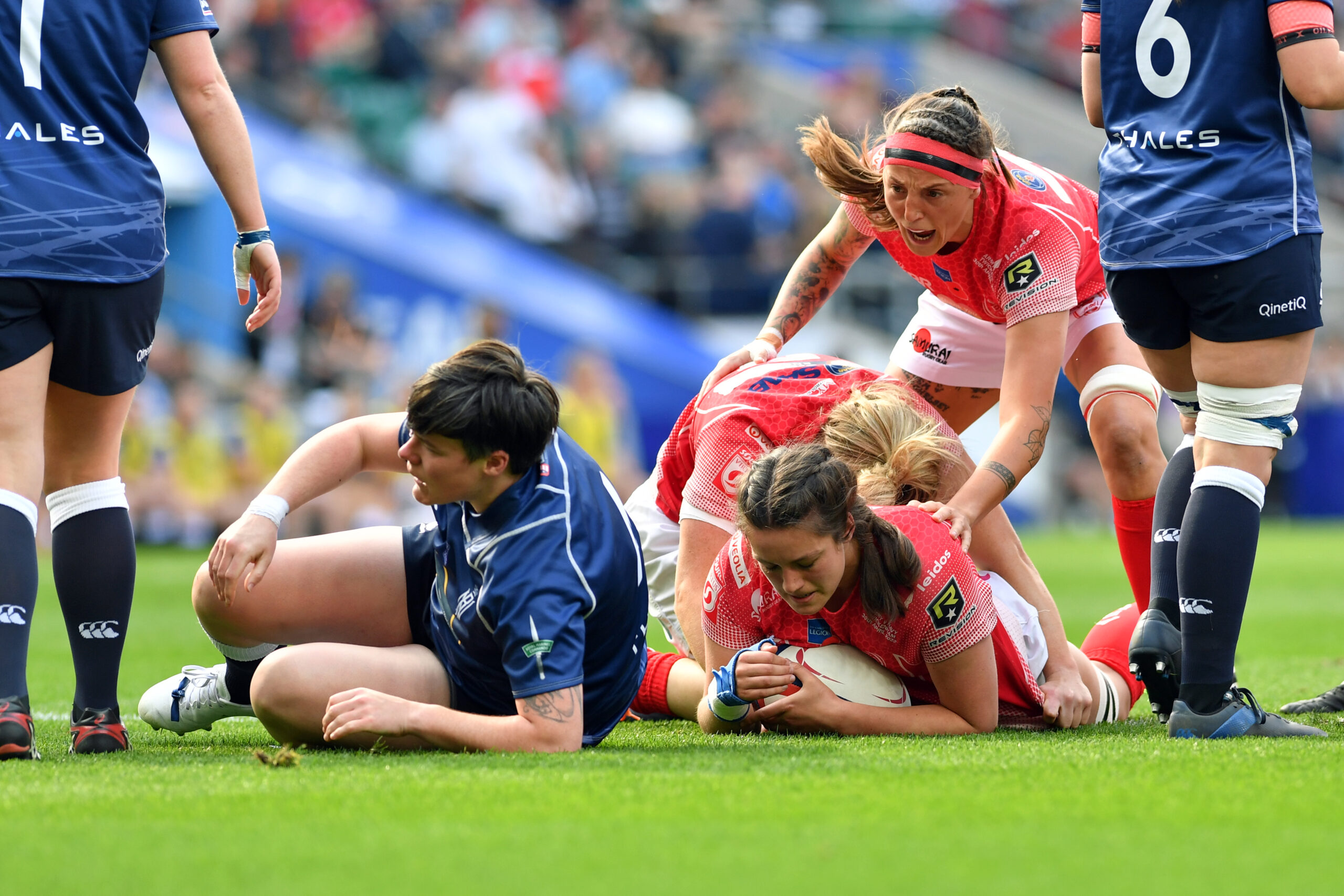 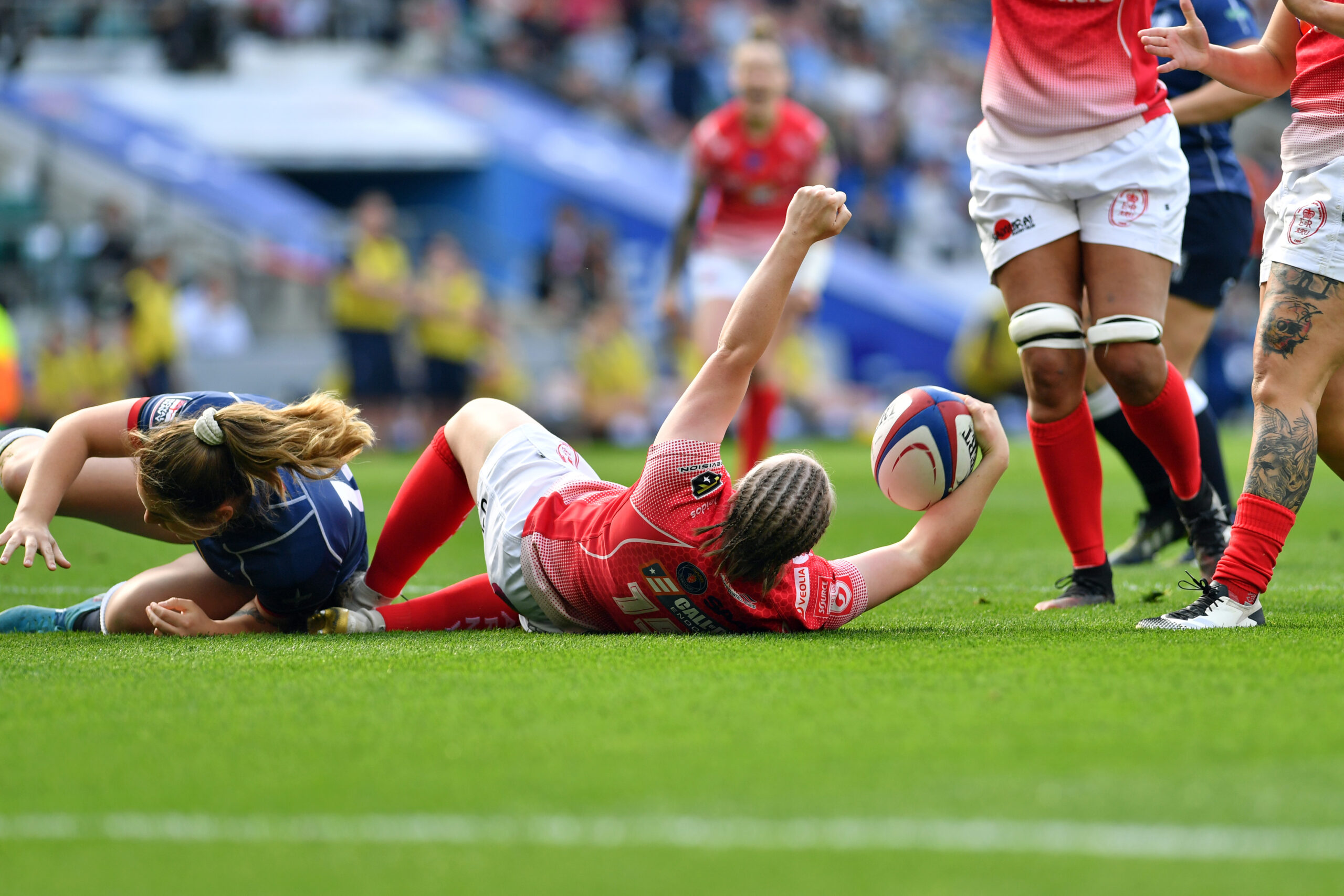 Lt Sally Stott and Sgt Louise Dodd opened the scoring for the Army.

However the Army were also putting themselves under pressure at the kick off, and as with the previous try they failed to collect the ball second time around.

This was followed up by a lineout going awry, but to highlight these errors would be doing a disservice to all of the good things which the Army were doing, winning back possession at repeated lineouts, putting the ball through the hands well, and managing the game in a constructive, structured, positive manner.

Nevertheless it took 20 minutes to extend the lead, as a couple of lineout drives were brought back by accidental offsides. Still the Army did not lose their heads, kept going through their processes and phases, and were rewarded by a third try of the day, Bdr Dainton going through from close range.

Pte Pursglove’s conversion was once again straightforward, making the score 21-0 in the Army’s favour. 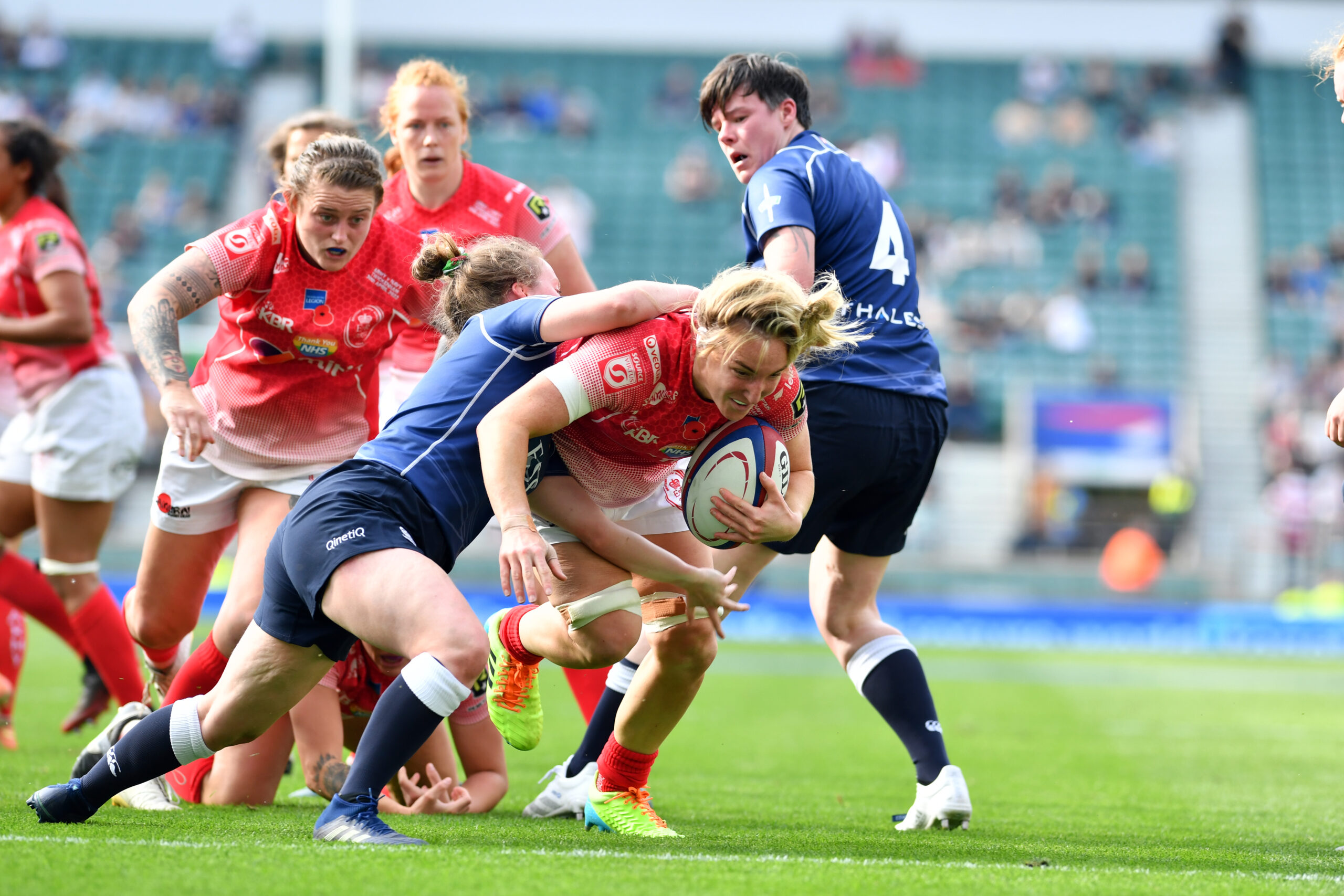 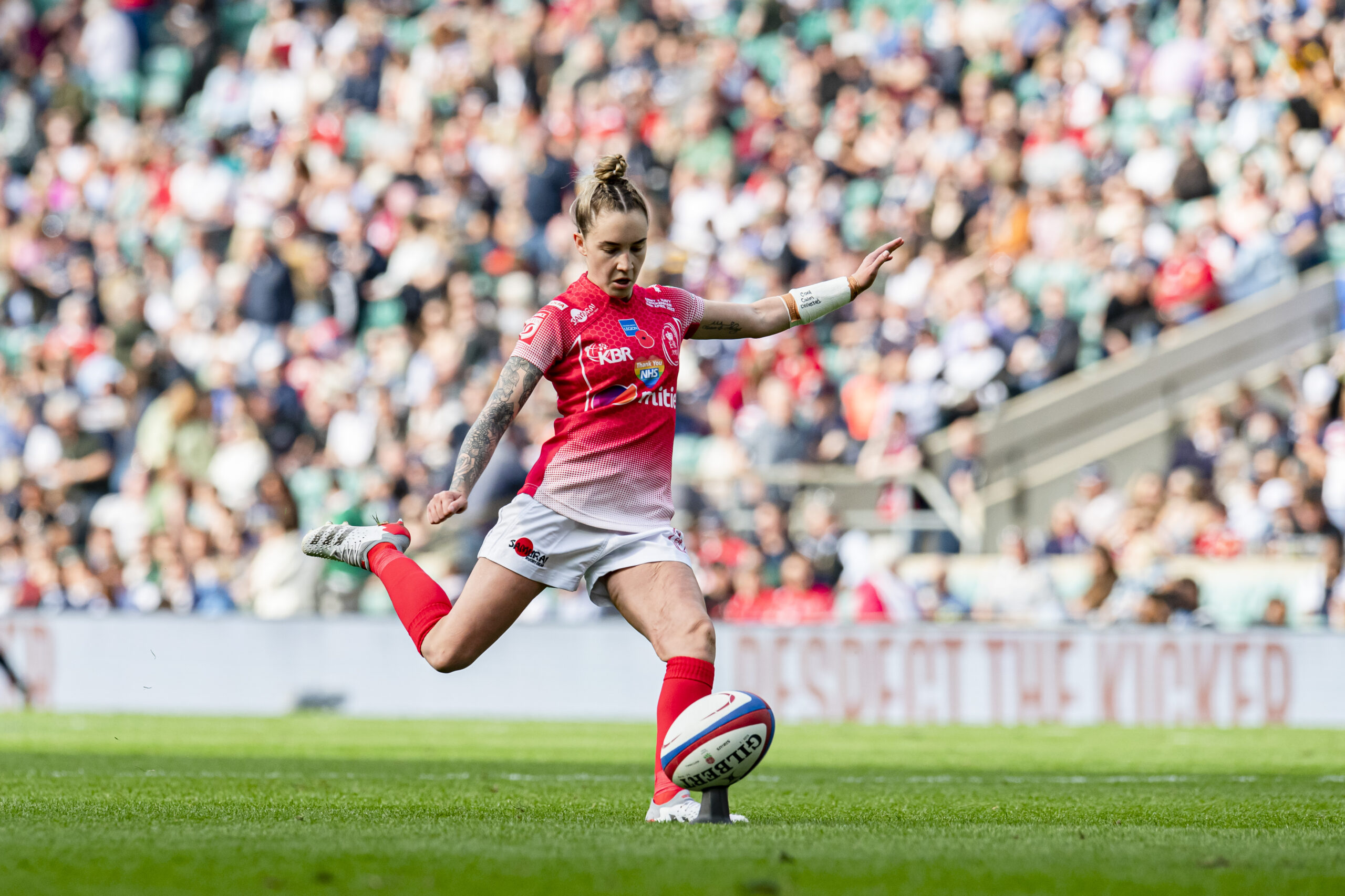 Bdr Bethan Dainton and Pte Courtney Pursglove added to the Army’s points in the first half.

There was more to come before the break, as the teamwork shone through once again as the Army showed their all-court game to work inexorably upfield and over the line, Lt Stott hitting a short line to crash over for her second of the day.

Leading 28-0 they may have been, but the Army were not satisfied, and second row duo Cpl Heidi Silcox (RAMC) and Maj Miller getting to stretch their legs to take the team back into the Navy half.

A penalty came a couple of phases later, and the Army retained possession to power their way from the 22 to the try line once again, Pte Pursglove finishing things off in the corner to send the teams into the sheds with the red shirts leading 33-0. 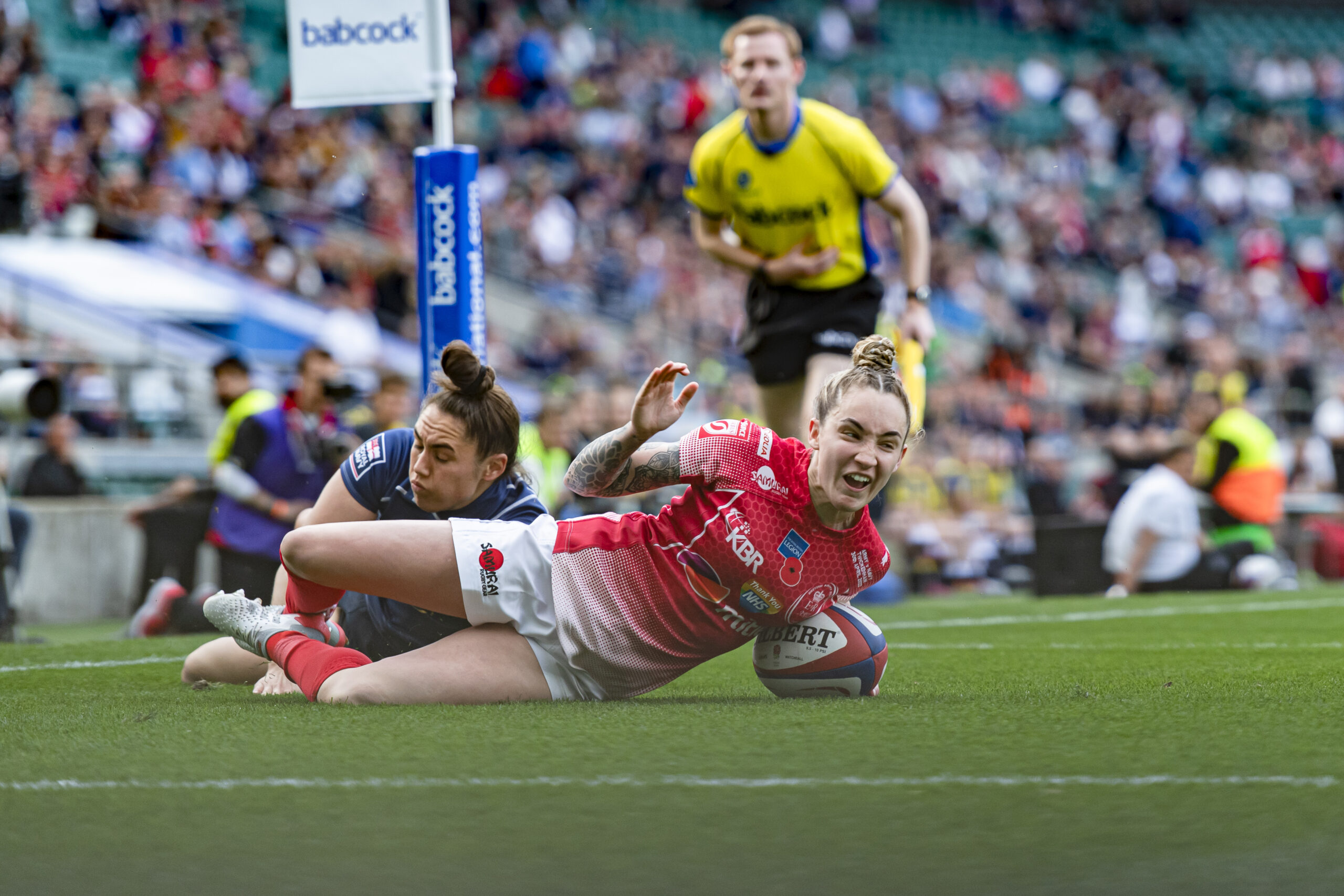 Pte Courtney Pursglove scores the first of her three try’s of the afternoon.

Five tries became six two minutes into the second half as the Army continued where they left off from the first, taking advantage of an opportunity presented to them by the Navy conceding a lineout close to their own line to put Sgt Sarah Batley (AGC (RMP)) over by the uprights.

Having kept the ball alive for their previous tries, the Army initially kept things tight in the search for number seven, sending penalties to the corner and setting up promising mauls. However these came to nothing, with a score also ruled out for a forward pass in the build-up.

There was also a rare slip-up to give the Navy a lineout on halfway after a dark blue kick which had been from outside the 22. This gave the Army an opportunity to go through their defensive drills in their own half, a test which they passed with flying colours. 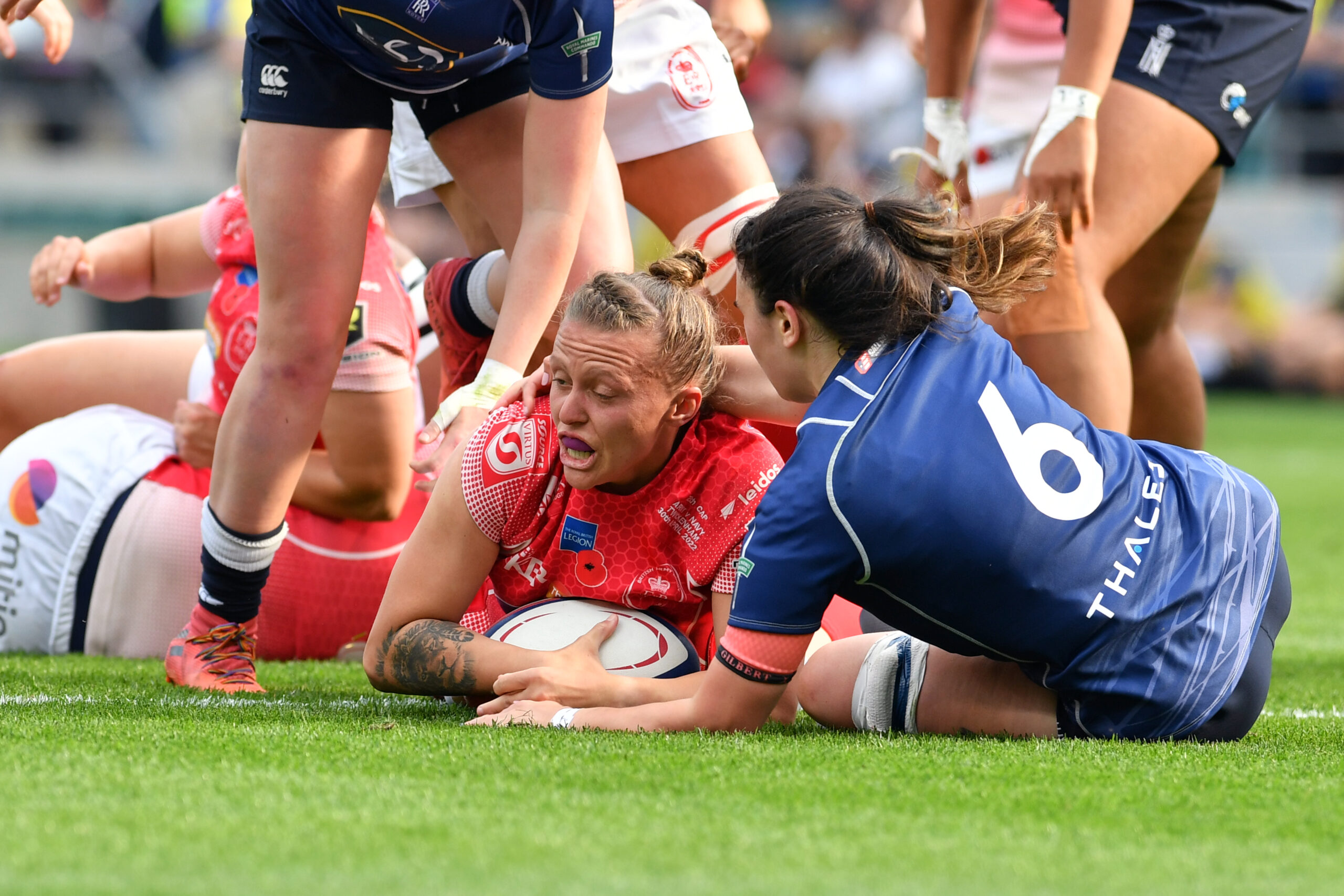 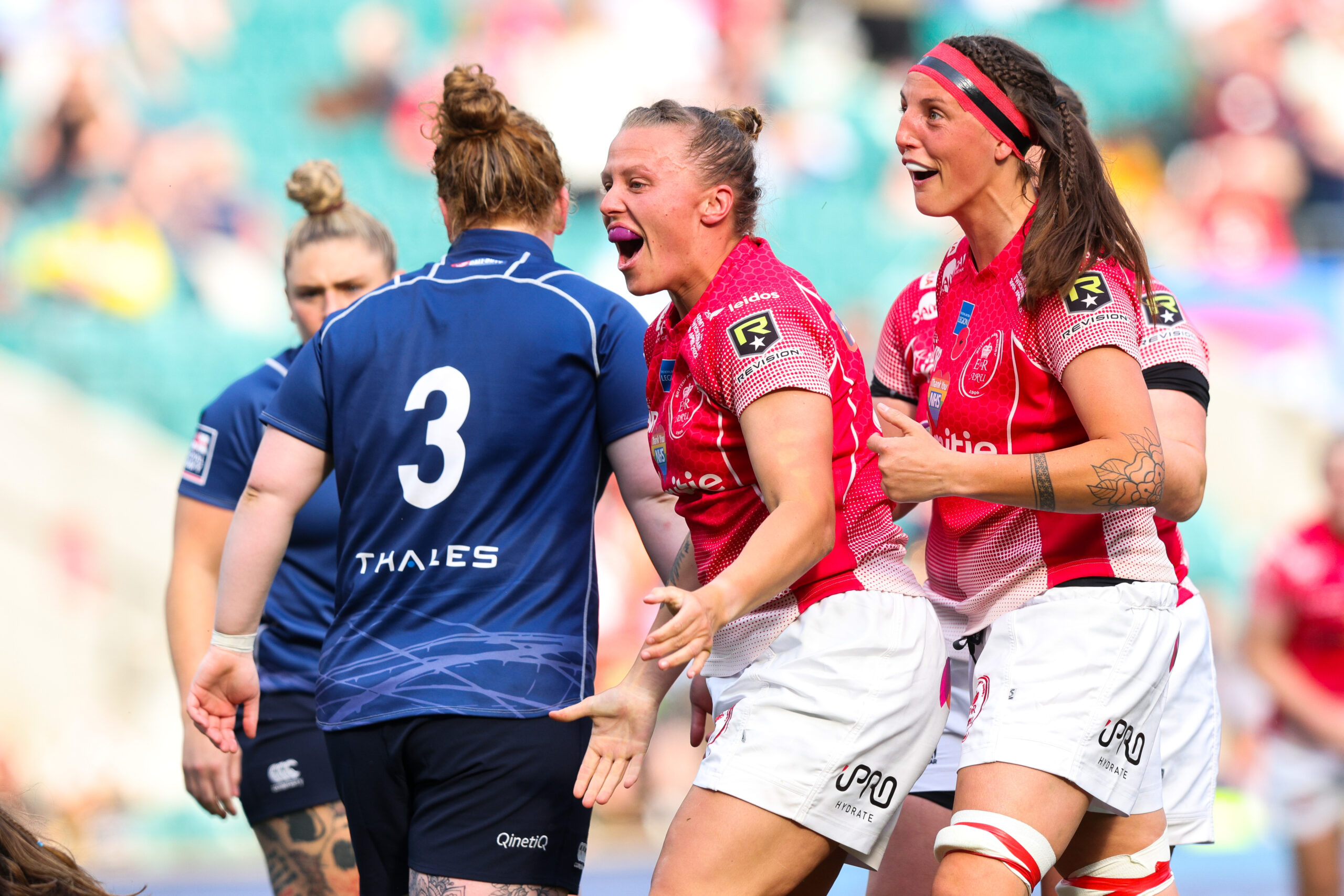 Winning her 25th Cap, Sgt Sarah Batley scored the Army’s first points of the second half

The pressure in defence eventually forced a scrum to the red shirts, and with space to play in the Army brought the crowd to its feet with a superb long-range score. Dummy running made space for LBdr Jess McAuley (RA) to come off her wing and create an overlap, Pte Pursglove doing the rest for her second try of the day.

The speedster maintained her composure to head to the posts, making her conversion both that little bit easier and bring the half-century into sight.

This was passed with 15 minutes to play, as Pte Pursglove was put into the clear by nice handling and awareness from SSgt Jade Mullen (AGC (SPS)) and Sgt Dodd, the winger sprinting clear for her hat trick.

Pte Pursglove took the ovation as Sgt Dodd added the conversion, and there was still time for two more tries. 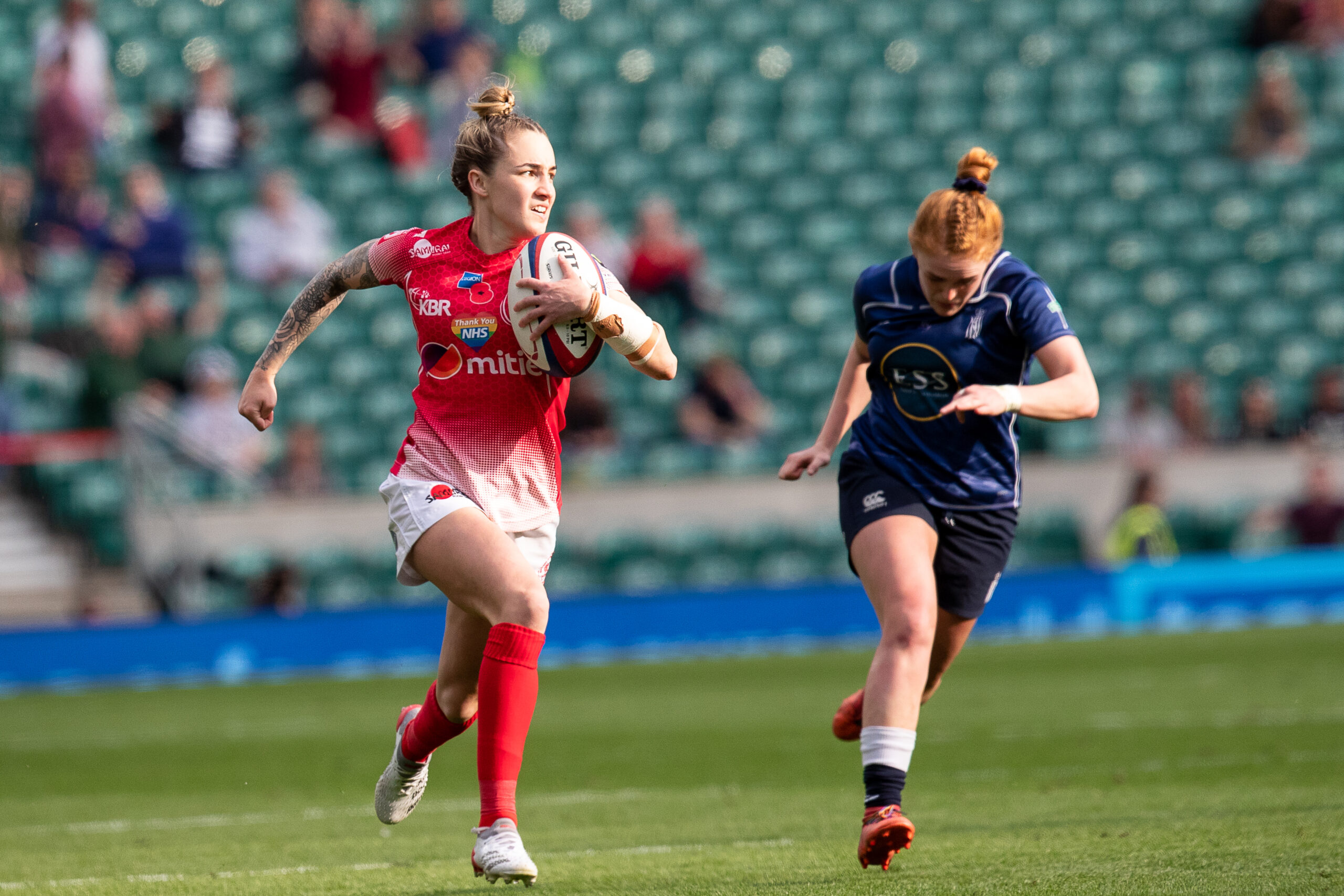 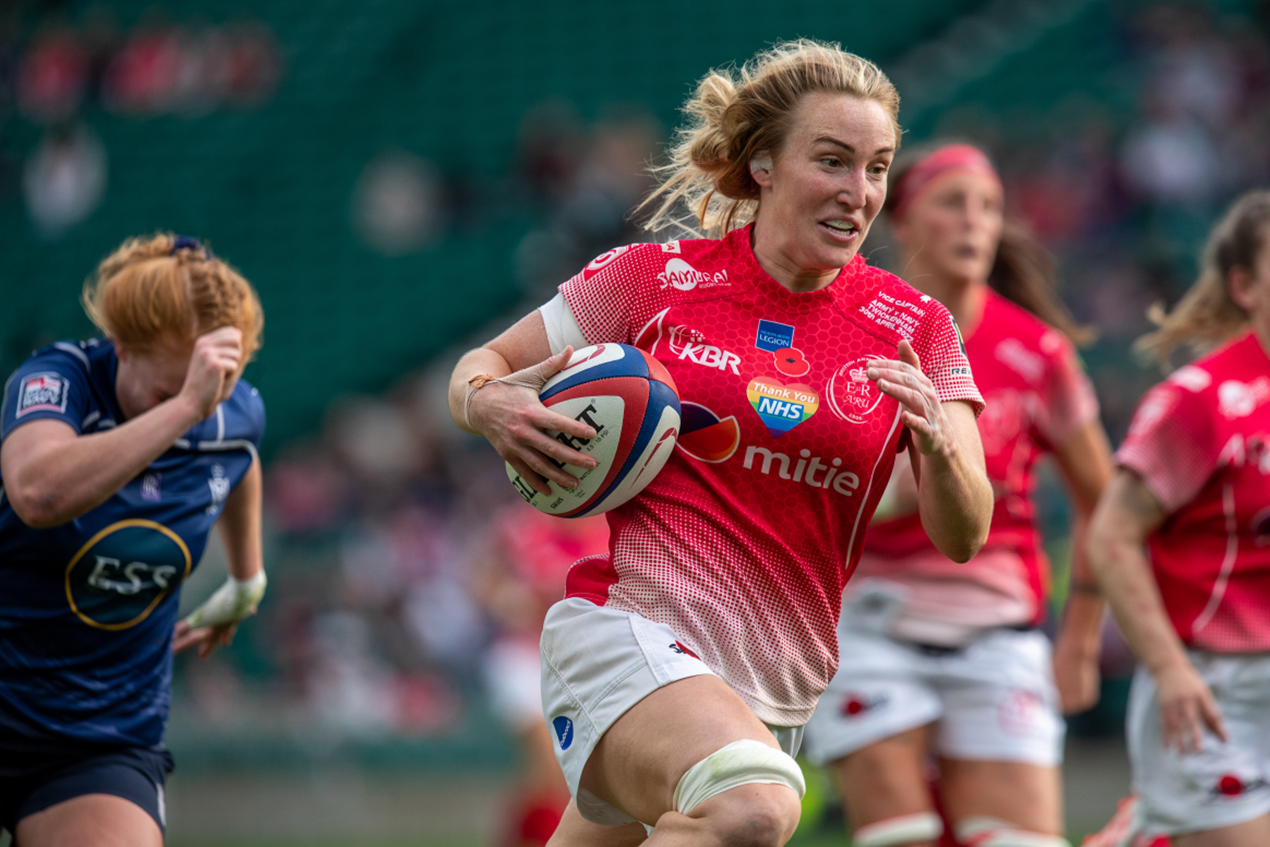 The forwards kept things tight to put LCpl Millie Williams (AGC (RMP)) over, but the team’s attitude was shown in the way they rounded off the match, playing from deep to create space for Bdr Dainton to exploit, the Wales international and Barbarian sprinting in from long range to bring the final whistle and cap a superb season for the red shirts in the process. 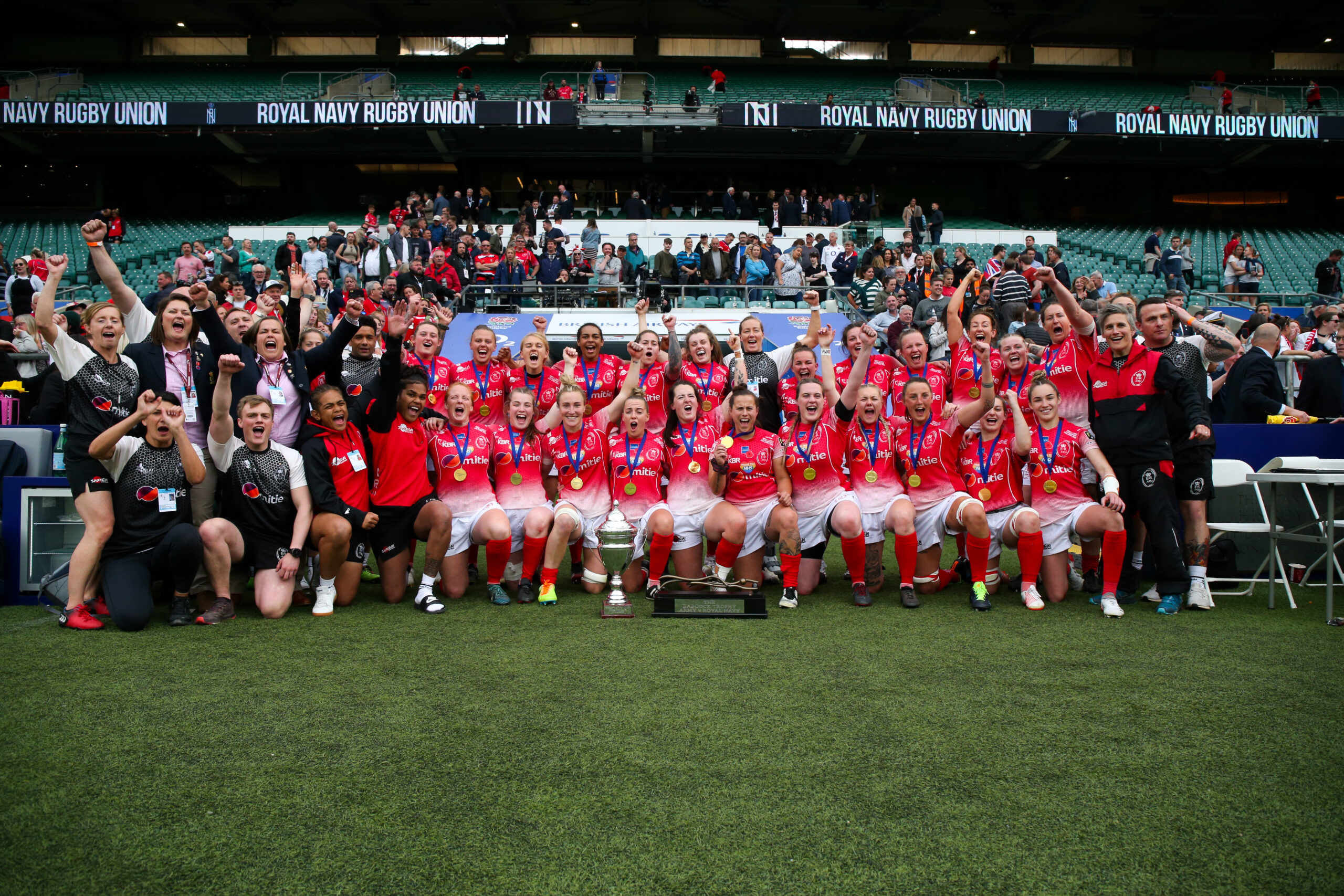 Winners of the Babcock Trophy and Women’s 2022 Inter Service Championship.

A full mage gallery from the match can be viewed HERE 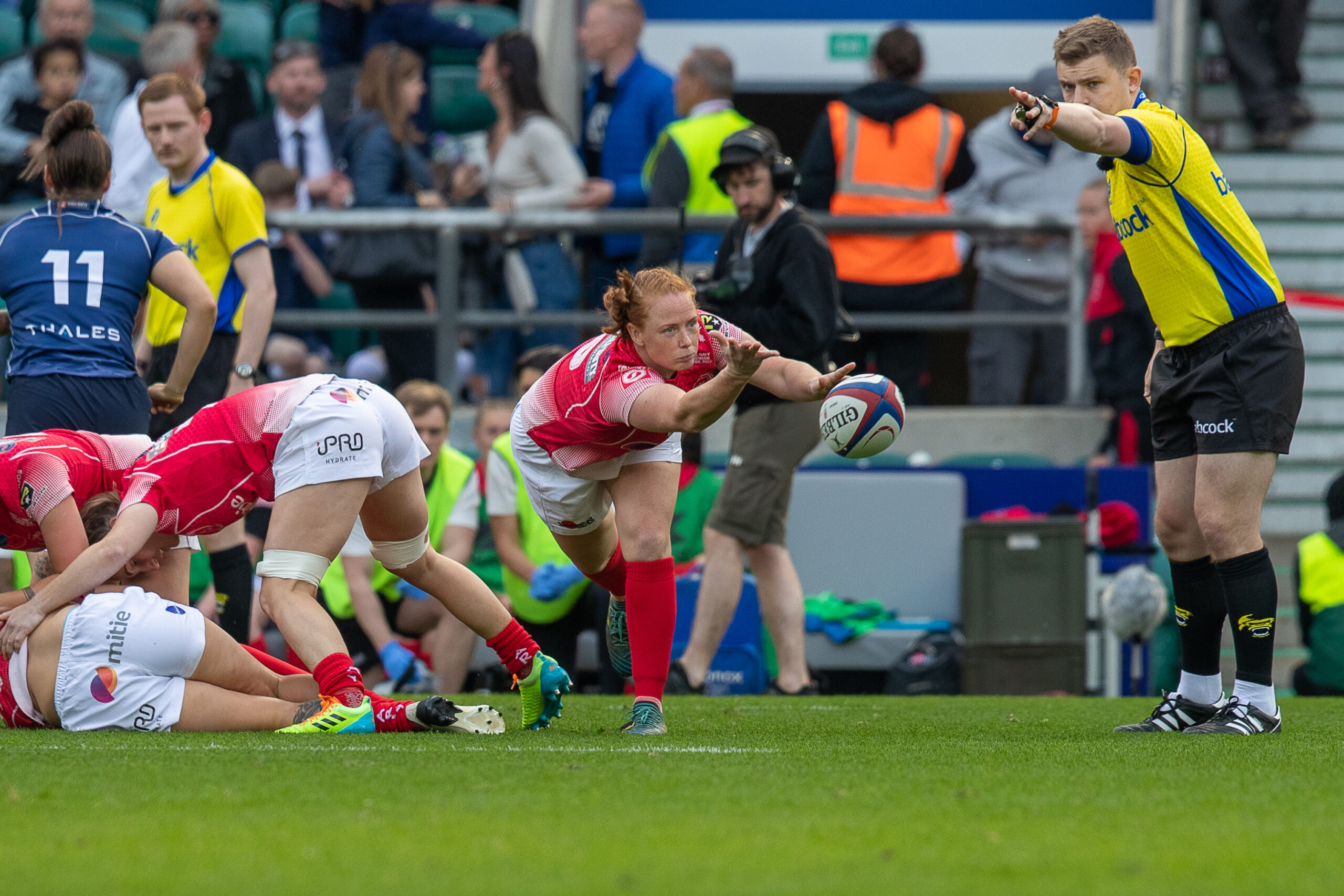 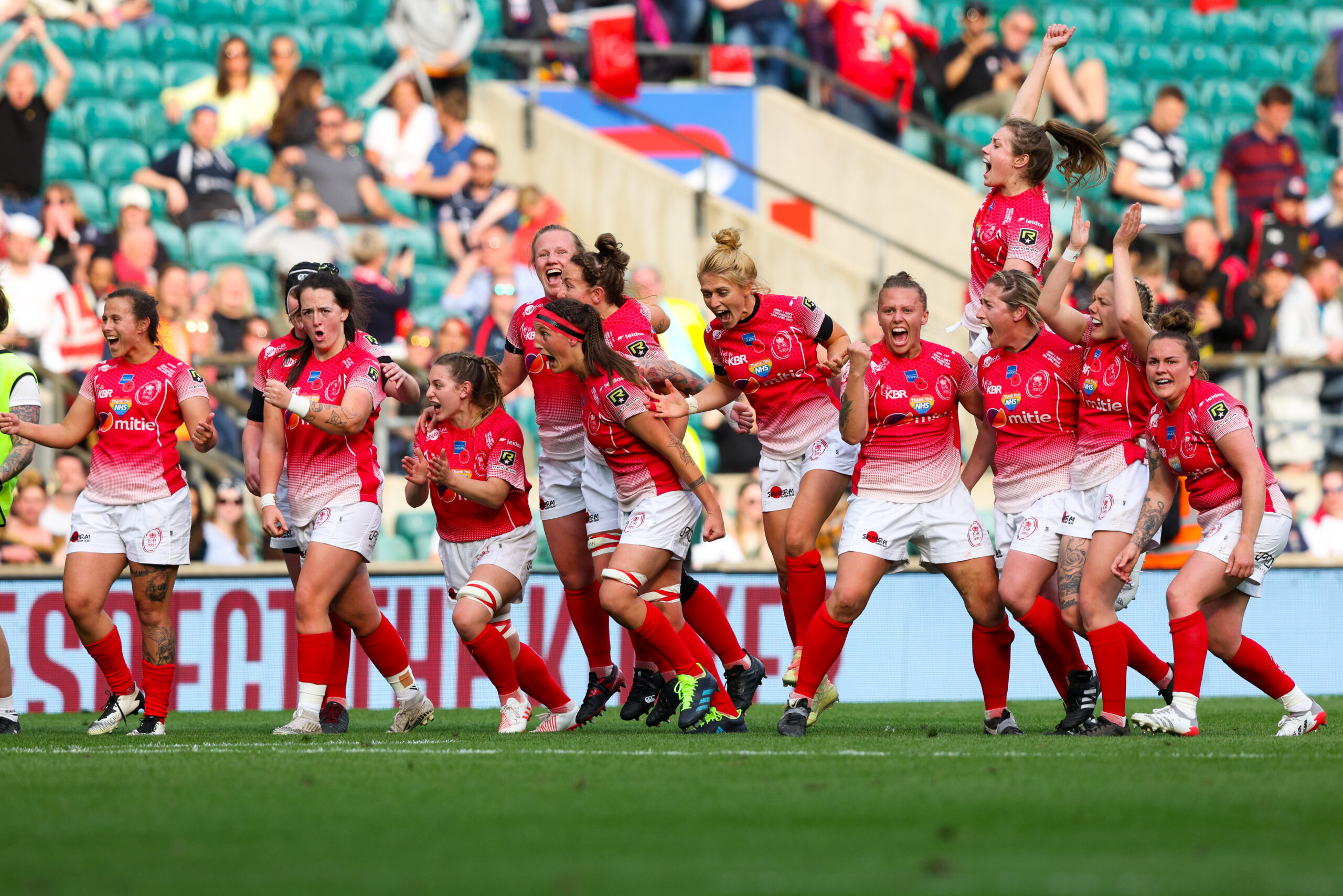 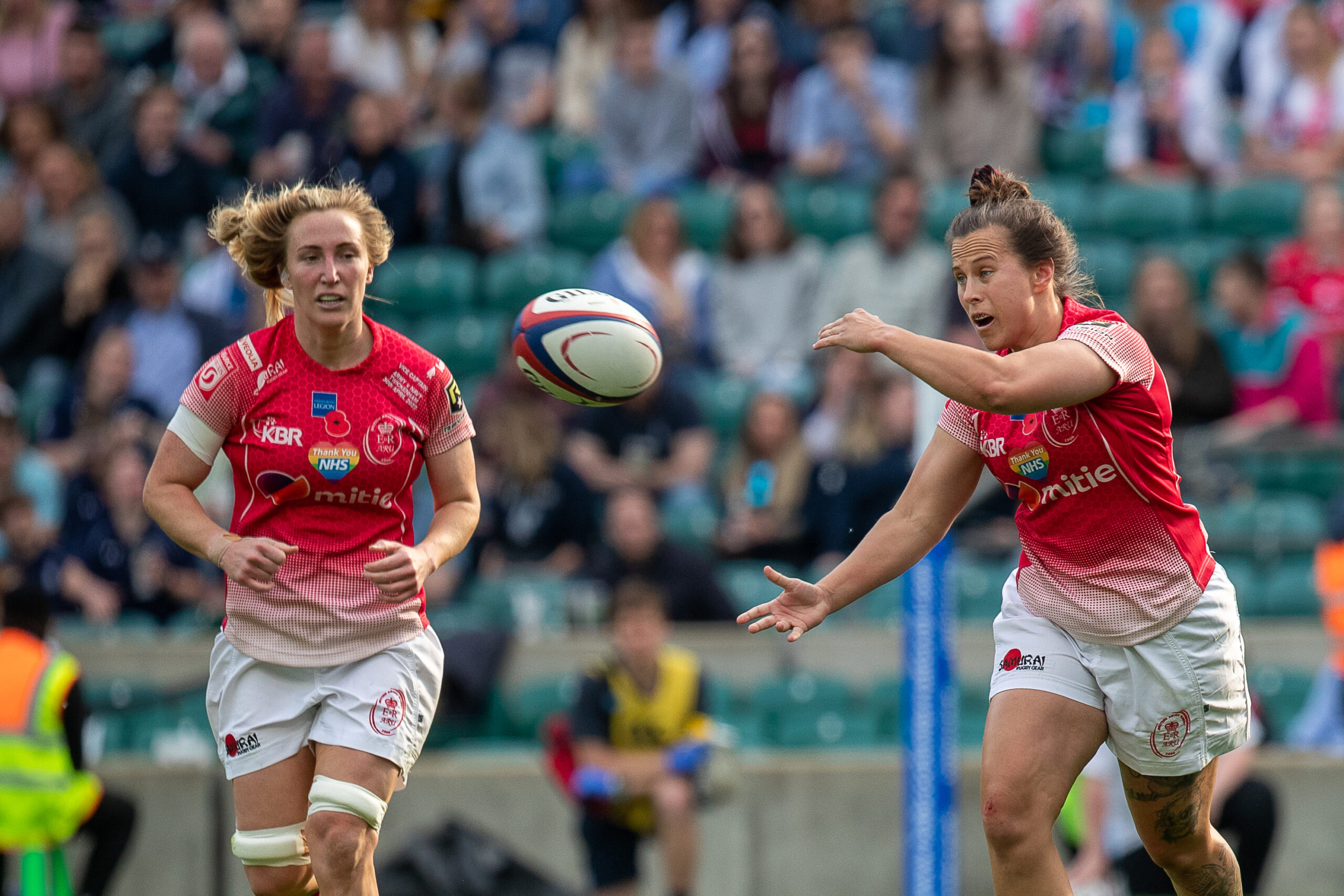