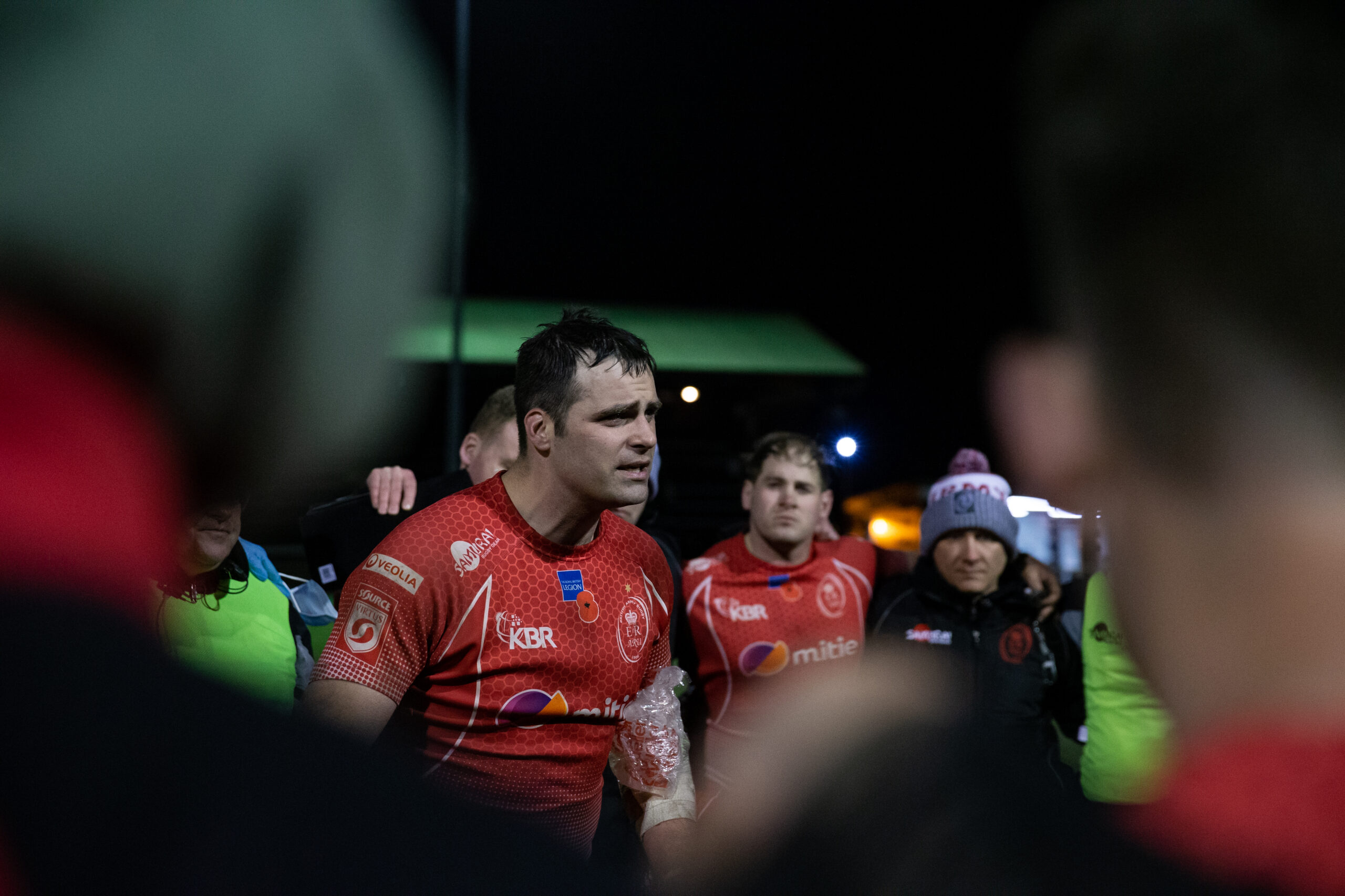 By Kimberley FowkeFebruary 24, 2022No Comments

Senior Men’s Head Coach Capt Mal Roberts (RLC) paid tribute to the second half performance put in by the Army team to put Cambridge University’s Light Blues away in the second half at Grange Road.

They may have been leading 7-5 at half-time, but both Capt Roberts and skipper Capt Jamie Miller (AAC) had plenty to say during the break, and this was reflected in a second 40 minutes in which the Army scored 30 more points to win 37-10.

“It’s the first time where we’ve gone in at half-time and Jamie read the riot act to the team as skipper and I continued from that,” Capt Roberts said. “It’s not really my style but there were so many frustrations from the first half, not completing tackles, retaining ball, and so on.

“The boys came out in the second half and proved not only to us as coaches but to themselves that we’re a good side and they’ve got it within them to perform. In the second half we put the processes and patterns in place, and played in the right areas. When we do that we’re quite a dangerous side.”

Cambridge had the better opening, putting some methodical and patient phases of play together as they worked their way from their own 22 up to halfway after receiving the kick off.

Meanwhile the Army had the better chances, kicking a penalty to the five-metre line for a lineout and LCpl Manasa Cakau (RE) making a powerful burst through the middle. But the lineout was lost and LCpl Cakau’s break was too good for his own team, the defence there in numbers before any red shirts could get there.

There was another break soon after from LCpl John Davetanivalu (R Signals), the centre carving a nice arc. This, too, was turned over, and with the Army de-fusing a Cambridge throw in the visitors’ 22, defences were on top in the opening 10 minutes. 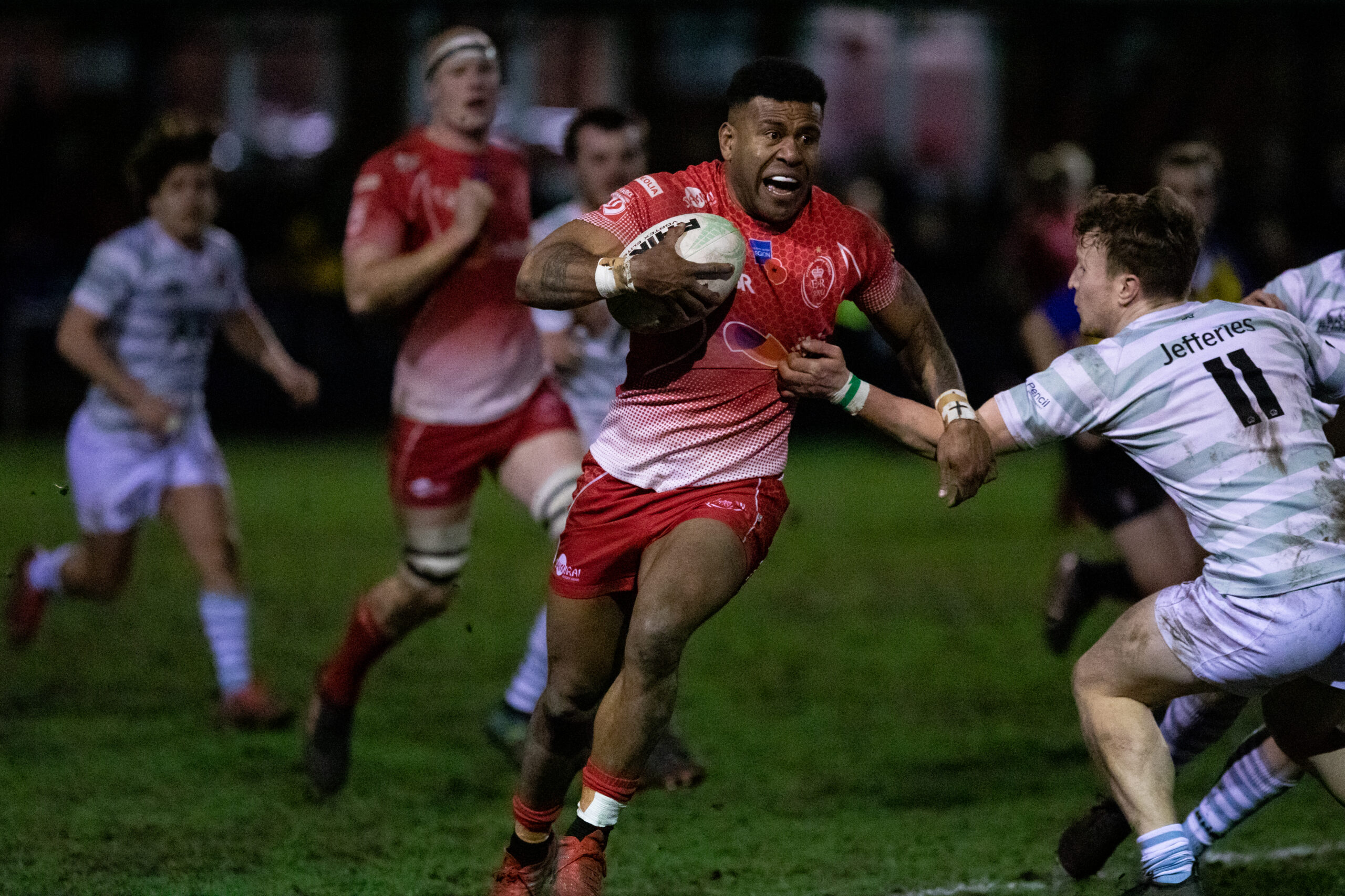 “Game on game you want to improve and put the marker further up,” Capt Roberts said. “But I’ve coached a lot and you need to stay calm under pressure.

“Last week the boys had a shock, Oxford played at a really high tempo and we got blown away in the first 20 minutes. This week we stuck with them, we got into good territory positions but then made simple errors. So from my perspective it was about believing in our systems and that’s what we did in the second half.”

The deadlock looked certain to be broken with 13 minutes on the clock. Cambridge centre pairing Suwi Chibale and Sam Odu combined superbly to break through a tackle and use the timing of their passing to put Chibale within inches of the whitewash. About to dive for the line, Chibale had the ball dislodged by a final, despairing tackle from Bdr Connor O’Reilly (RA), and instead of conceding five points the Army were instead clearing their lines.

The first points came on the half-hour. Chibale had shown his threat already, and when he made another break through the middle there was to be no mistake second time around. This time the pass went to full back Alex King, who drew the final defender and put wing Dougal Russell over unopposed.

Having waited 30 minutes for the first points it took fewer than three for there to be more. And if the Cambridge 13 had shown some good ability with ball in hand then his direct opponent, LCpl Davetanivalu, went one better with a break which bamboozled the midfield and outstripped the wide men all the way to the line.

2Lt Matt Smart (Yorks) landed the extras to give the Army a 7-5 lead, but when Cpl Dan Tooth (Rifles) was yellow carded for some cynical play deep in the visitors’ 22 something special was going to be needed to hold Cambridge out. This is exactly what happened, the defence forcing a fumble, and the two-point advantage remained until the break. 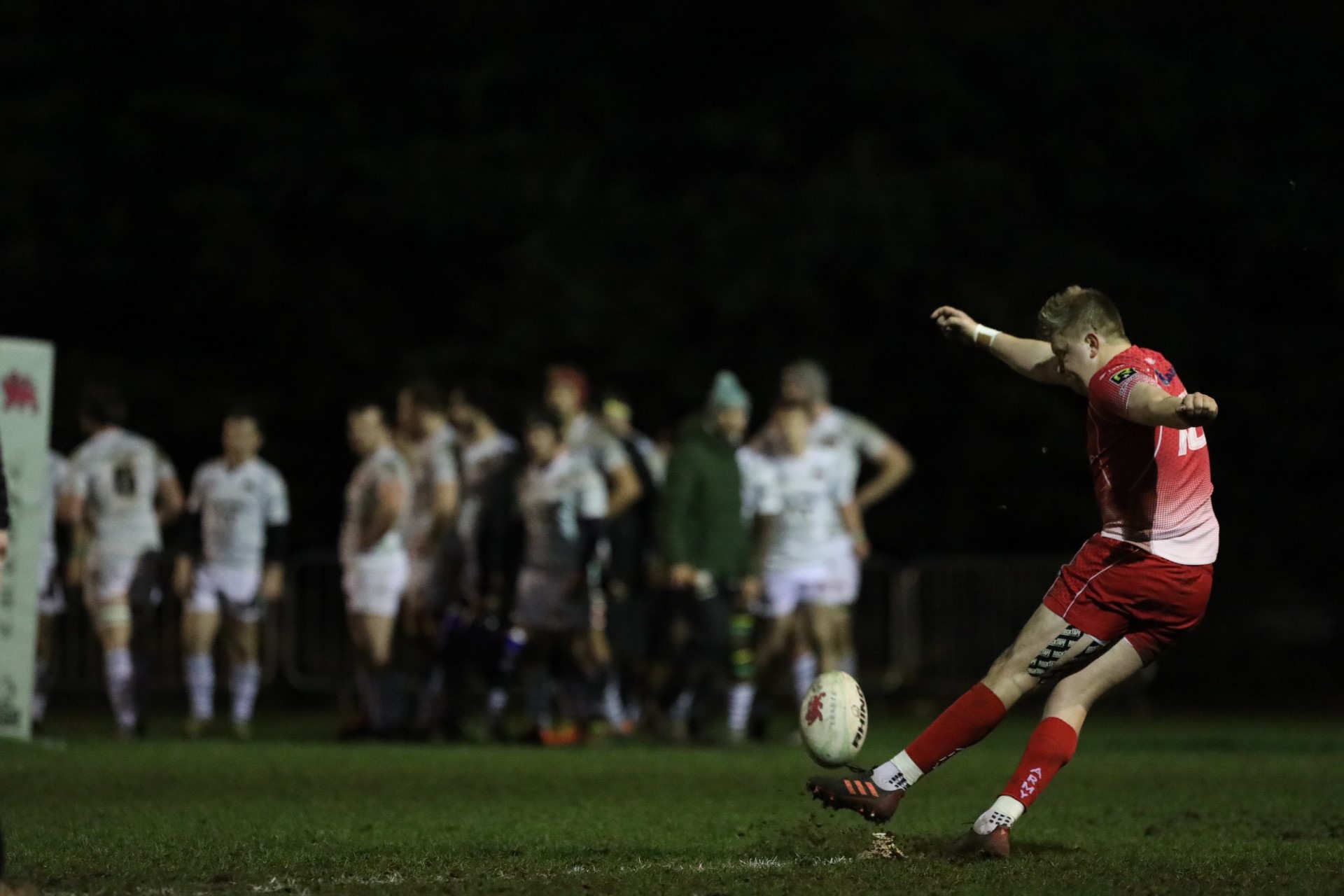 “The sin binnings were frustrating,” commented Capt Roberts. “You always want to be playing with 15 men at all times. But things happen, and from my perspective as a side you can play better. You think that your backs are against the wall and you drag yourself off the deck to make that deficit not as noticeable as it could be. That gives you a little bit more focus and sharpens the mind.”

Cambridge began the second half back on the front foot, recovering the kick off. But the Army had come out determined to play, too, and put in a massive defensive effort to drive the Light Blues back time and again.

With the tackles coming in it was a sublime bit of skill which put Cambridge in a position to score, Chibale slipping an offload to Odu while on the receiving end of a massive hit, putting the inside centre on the road to the 22. The Army scrambled back, but it was only a matter of time before the try came, Charlie Friend crashing over from close range.

With Cambridge’s kicker having been off target with both conversions the students’ lead was just three, meaning that when a scrum penalty went the visitors’ way on the home 22 it was a straightforward decision to give Spr Jack Johnson (RE) the opportunity to tie things up at 10-all, which he duly did.

Having been a man down in the backs for 10 minutes either side of half-time, the visiting pack then had to do the same a few minutes after returning to full strength. But it was Cambridge who imploded, Chibale sending an ill-advised offload, SSgt Tom Chennell (RAPTC) snaffling the ball off his opposite number at a scrum, and then home fly half Max Loveridge both conceding a penalty try and seeing yellow for a barge off the ball on Bdr Jake Richards (RA) while they were chasing a ball to the line.

The penalty try put the Army 17-10 up, and the mood shift was visible, the ball zipping through the hands to Bdr O’Reilly, who needed a gang tackle to get him into touch with the line in his sights. 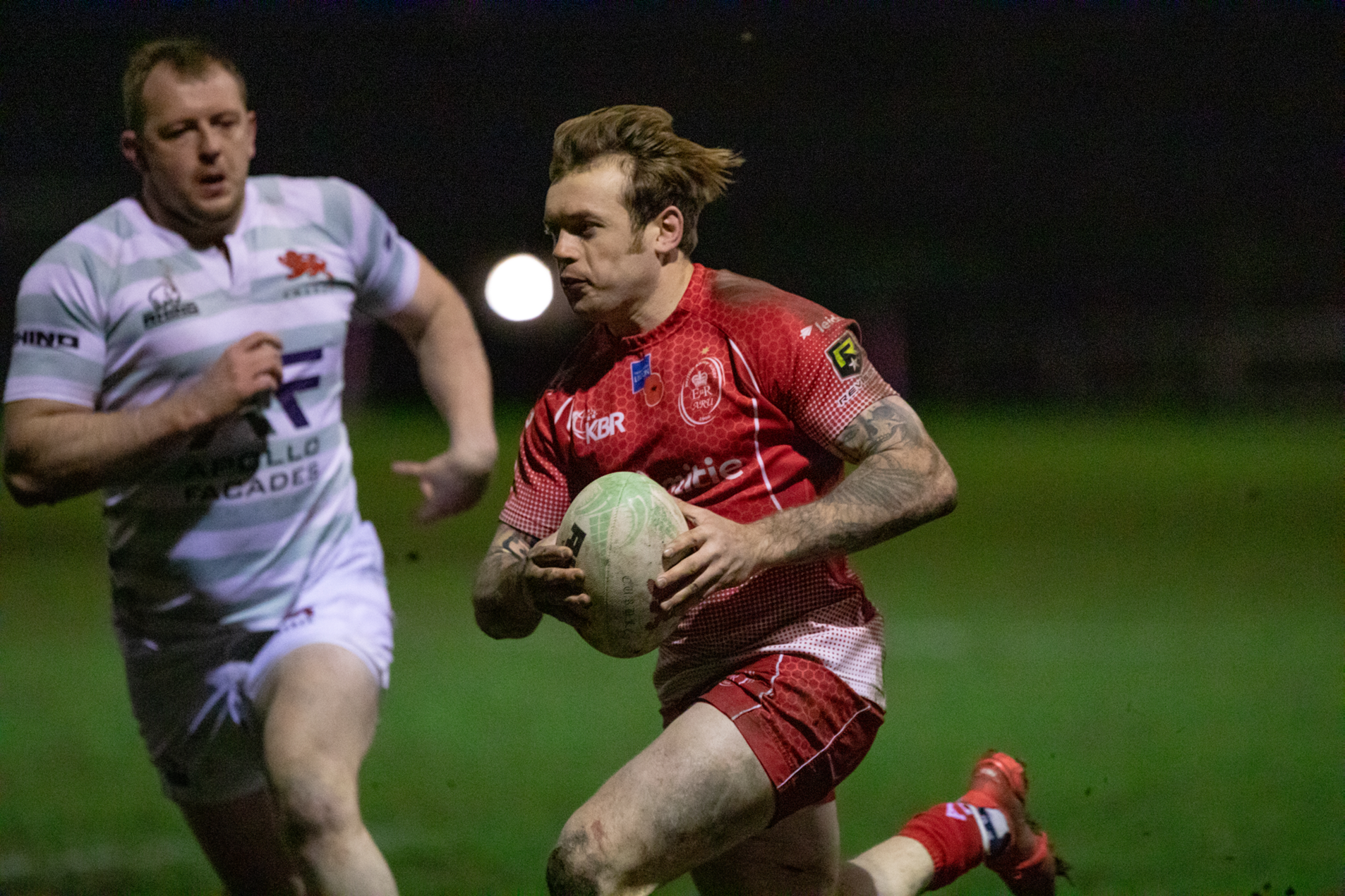 Cambridge had held out that time, but there was no such let-off as the 70-minute mark approached, the ball going wide again and Bdr O’Reilly turning provider to feed Cpl Epeli Kotobalavu (47 Ad Sqn) in the corner. The touchline conversion was a peach, not least because it took the Army 14 points clear at 24-10.

The Light Blues’ danger men still posed questions, not least number eight Archie Smeaton, who was as dangerous through the middle as the centres had been further wide.

But it was the Army who was adding the points, Spr Johnson kicking two more penalties – the second from 47 metres. 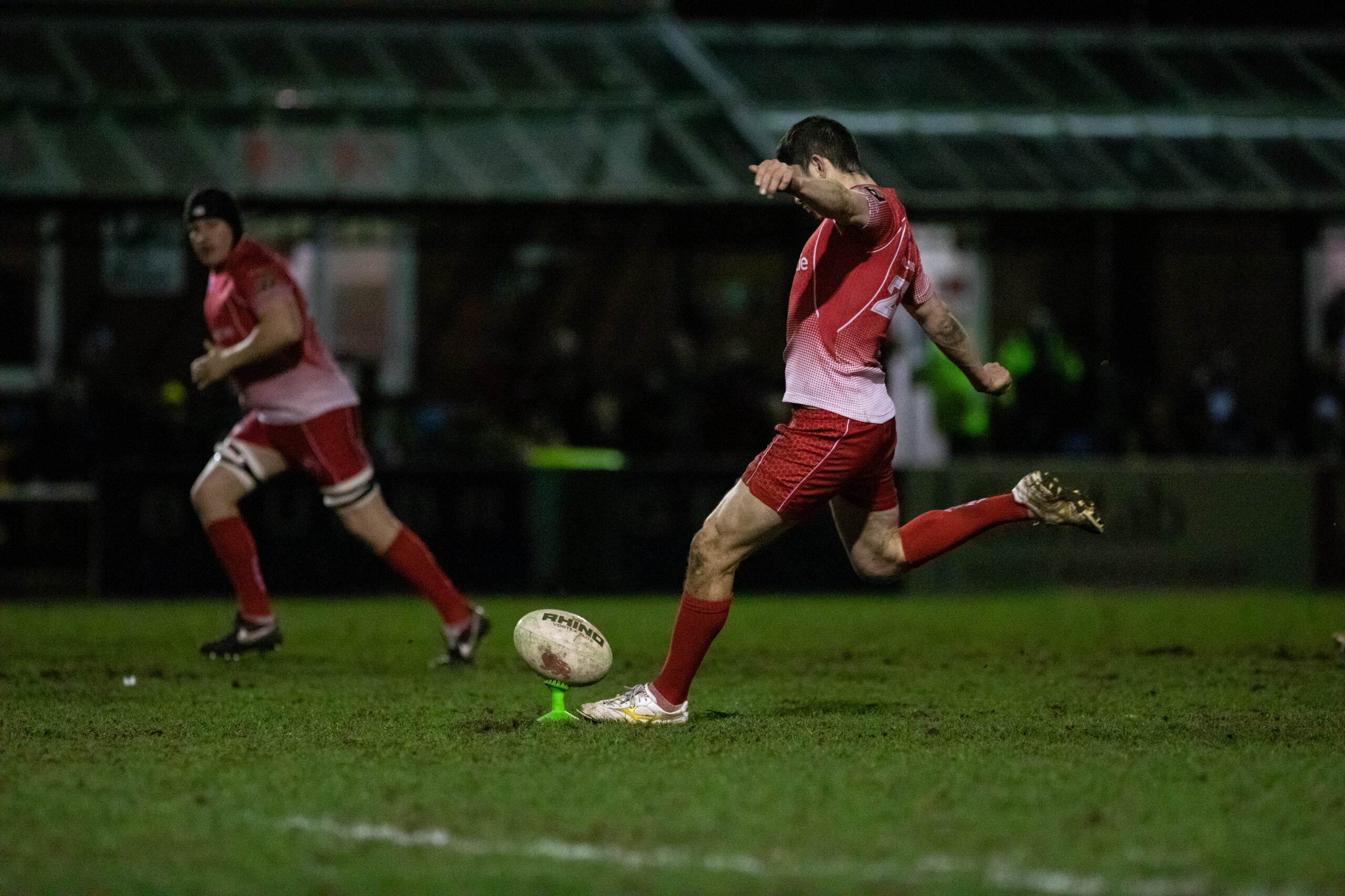 There was even time for a late melee following Capt Will Reeve’s (HQ 4X) late tackle on Tim Andrew. David Holdroyd came steaming in, with both players seeing yellow. With the penalty reversed the Army marched upfield, LCpl Davetanivalu offloading to Bdr Bridges for the final points, Spr Johnson’s conversion bringing the full-time whistle and the 37-10 result.

Next up for the Army is a trip to Championship club Coventry on Saturday, March 5th, and Capt Roberts is under no illusions as to the challenges the team will face at Butts Park Arena.

“It’s always a tough game at Coventry,” he said. “We’ve got a couple more of the Championship boys coming into the squad for that, which should add another level of experience. I’m hoping that they increase the level again and you can see game on game that we’re starting to improve the quality of rugby.”

There is also the significant matter of whittling the squad down to 30 ahead of the next stage of build-up towards the Inter-Services Championship. Coaches throughout sport have spoken about the toughness of both the decisions and communicating selections to players, and Capt Roberts is no different.

“It’s the hardest part of the job, but it’s the part of the job I have to do,” he said. “I take pride in being a good man manager of people and you have to look someone in the eye and tell them the reasons they have not been selected.

“This season we’ve introduced player profiles for every player, and everyone who comes into or leaves the squad will have areas of the game they need to work on and improve. As long as they go away and work on those areas they will be back in contention next season.”