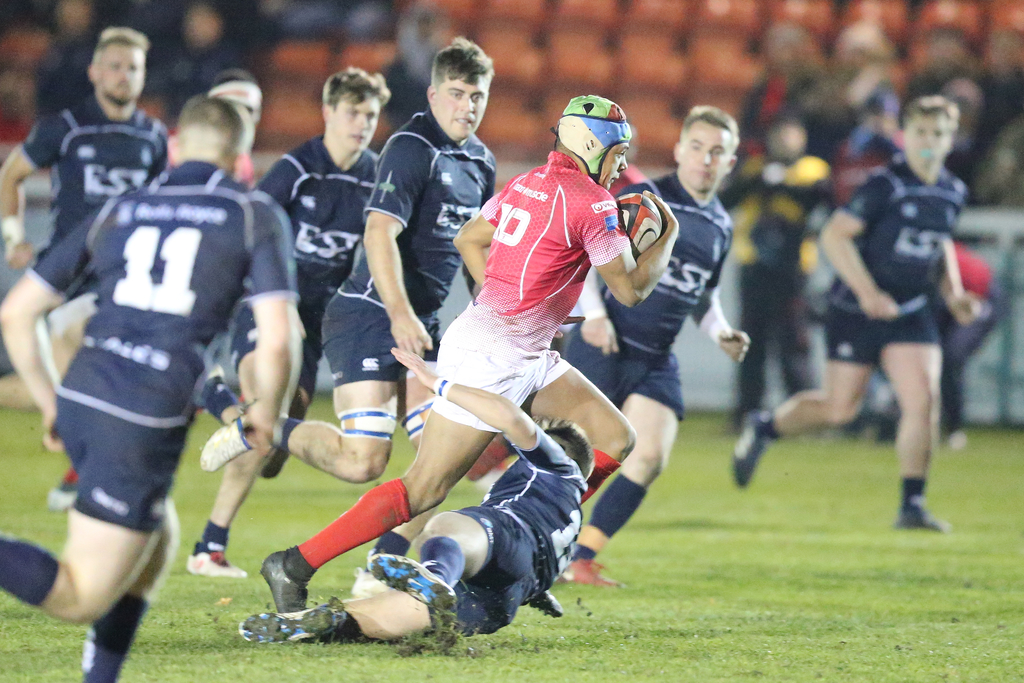 The Army Young Guns fire a broadside across the Royal Navy in anticipation of Championship decider with the Royal Air Force.

The Royal Navy U23 team travelled to the home of the Army last night knowing that a win against the Army under 23 side would give them their fourth under 23 Championship win on the bounce, a feat not achieved before.
Ex-Army Skipper and now Army Academy Head Coach Mal Roberts had prepared his young ‘Red chargers’ well with tough warm up matches against national league opposition however he knows from personal experience that an inter service fixture raises the level of competitiveness way above what most of the young team had ever experienced. 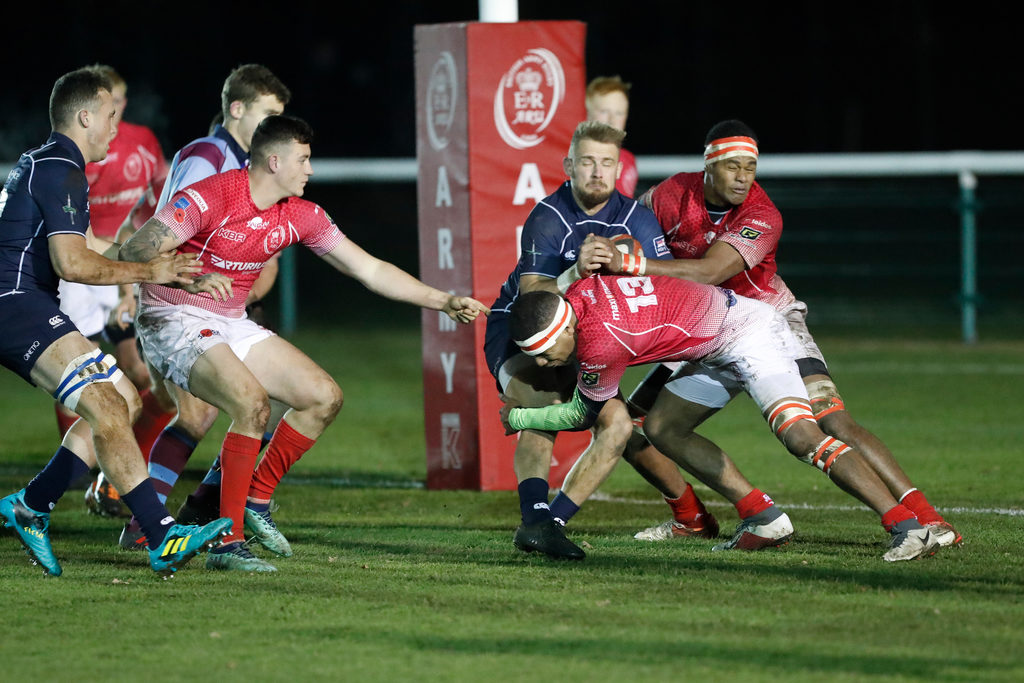 A healthy crowd had gathered to witness if the Royal Navy could make history or whether the Army team had enough in them to shape the outcome of the result.
The Navy started with the confidence they had taken from beating the Royal Air Force the previous week at Burnaby Road 34 – 31 and dominated the early exchanges however the rugby purist could sense early on the Dark Blue shirts were not going to have everything their own way. 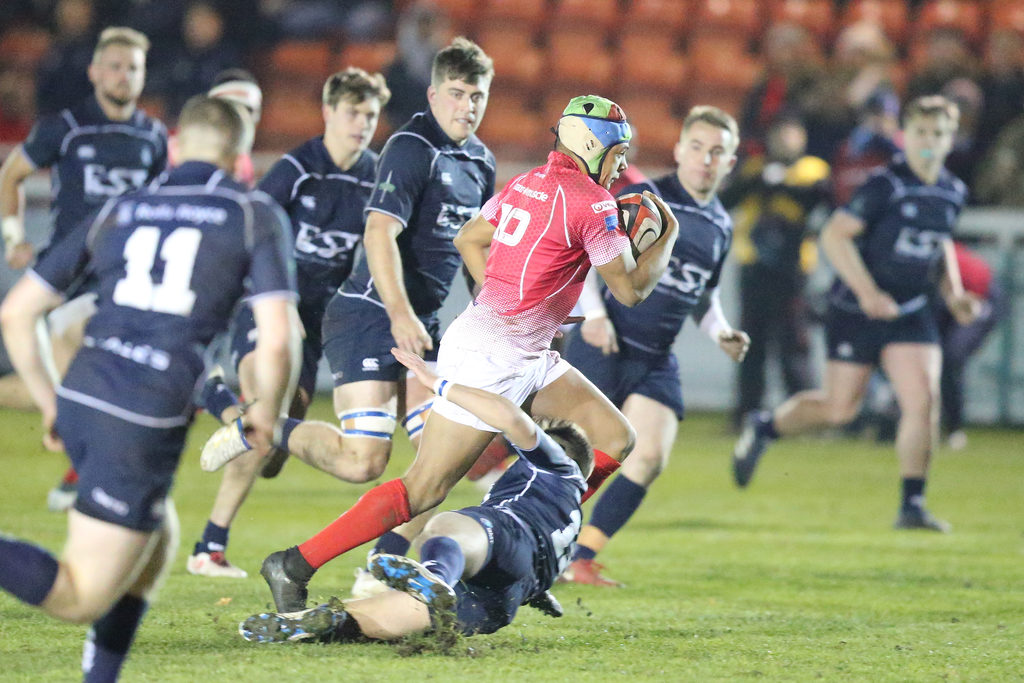 It was however the REDs that crossed the try line first, Army fly half Fusilier Aaron James (Royal Welsh) gave a man of the match performance and a series of sublime cross field pitch kicks and his own individual try had the REDs take a well earned half time lead 20 – 7 even though the Army discipline had seen them reduced to 13 with two yellow cards just before the 40 minutes. 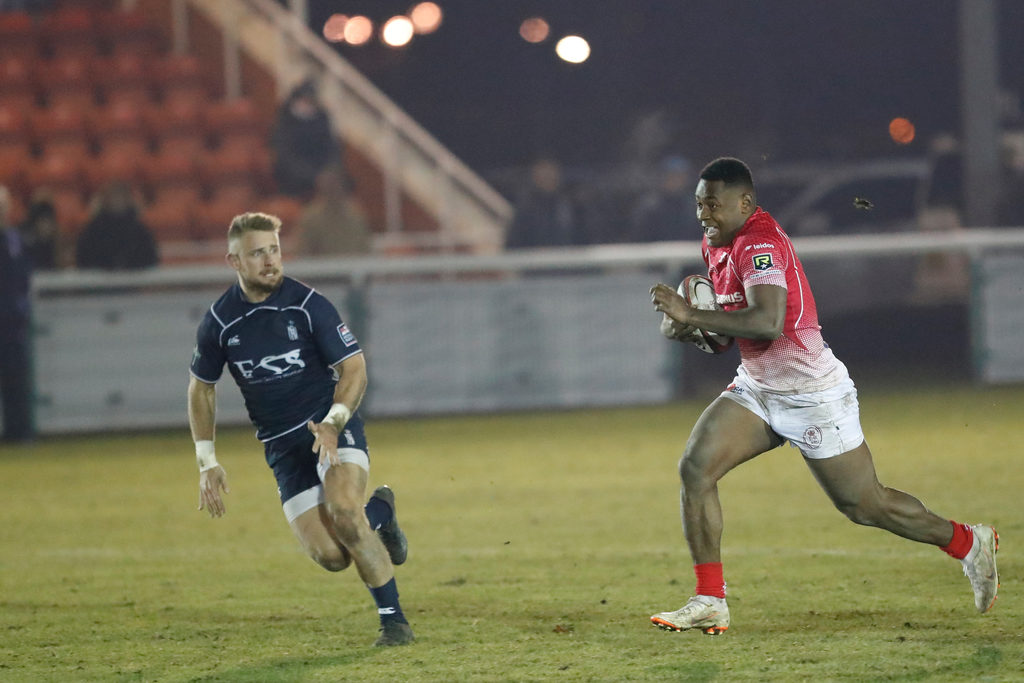 The Royal Navy came out focused in the second half and pressed the Army line straight away, looking to take advantage of the sin binned players; their early pressure took effect and they were rewarded with a well worked try however shortly from the restart it was James once again that broke through the Dark Blue defence and after a few more phases replacement LCpl Kilbey (Royal Signals) crashed over from short range.
The score board was kept ticking over as the Navy scored an excellent try that had a touch of what the Scotland forwards had done to South Africa a few days earlier from a line out; Marine Papp received the ball straight from the top of a line out and ran over un opposed in the corner. A penalty to the REDS then had the Royal Navy back up on the Army try line for another line out and a similar score, game on….. the RN sensed they could do what the RAF couldn’t do the previous week and win at the death, they once again pressed the Army defence hard and were feet away from crossing the line once more however a great defensive shift overturned the ball and the game was won. 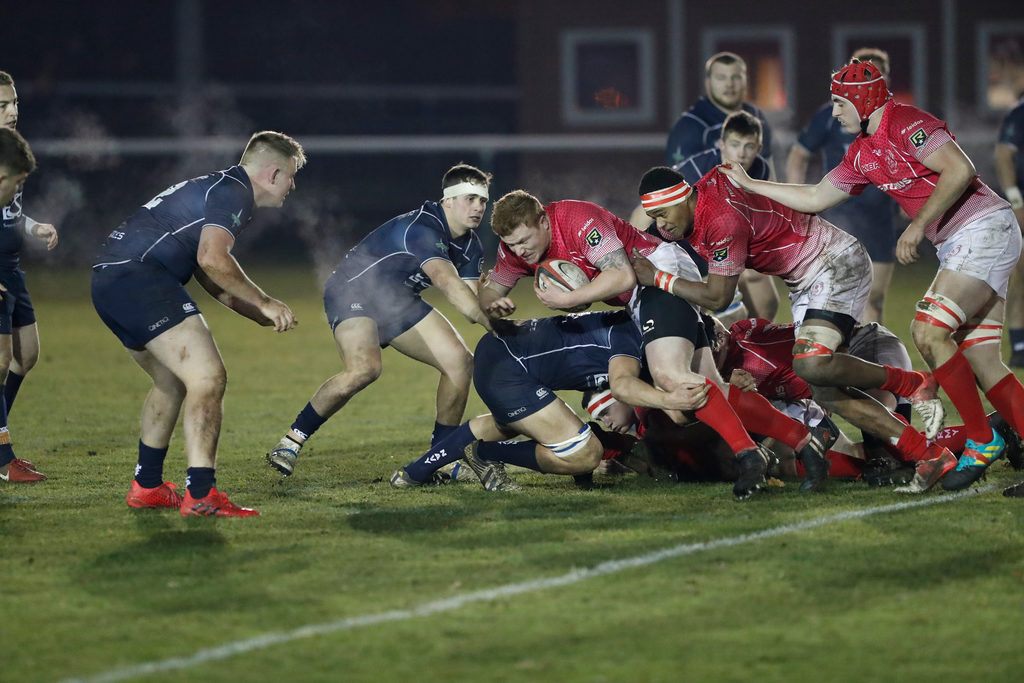 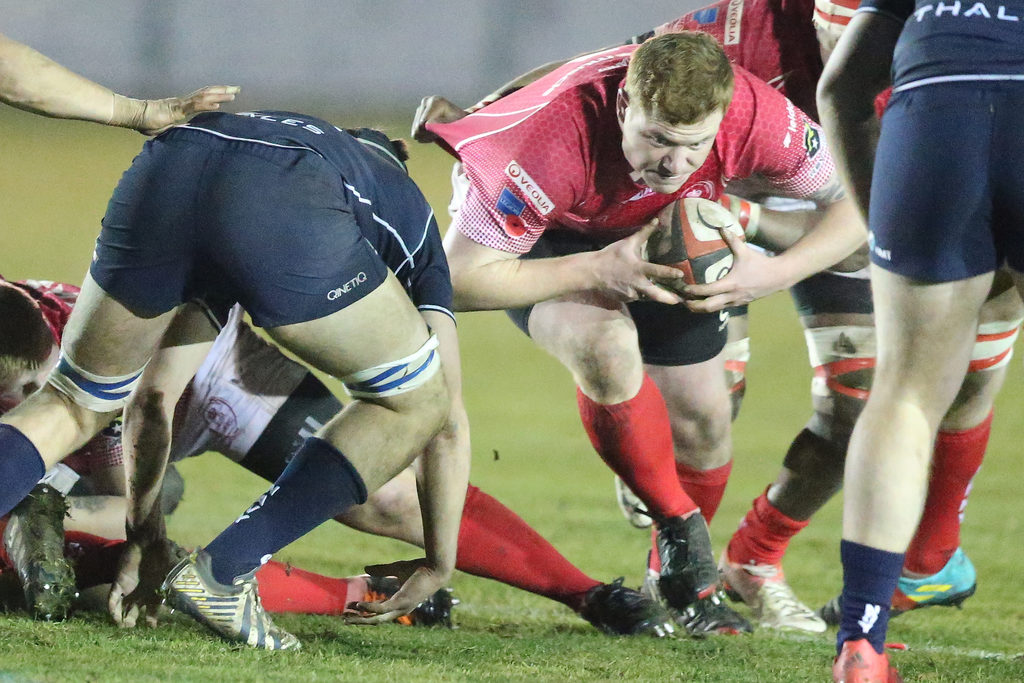 A word for the runners up. The Royal Navy played with great pride and passion, many of their players have put their hands up for higher selection that awaits later in the season, they can return home knowing they had played their part in a fantastic match. 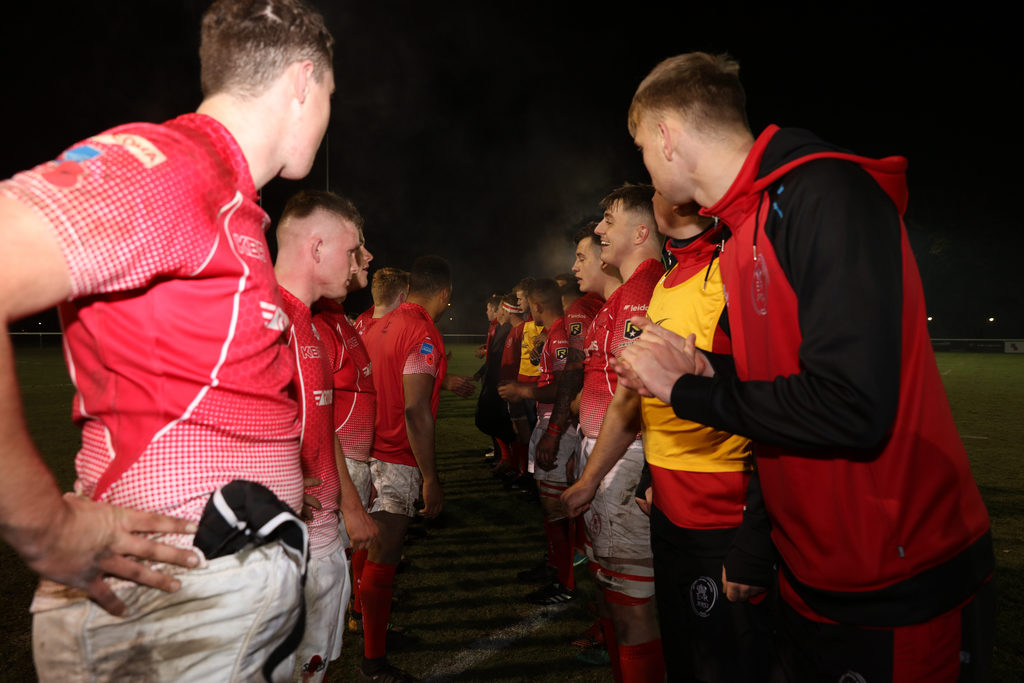 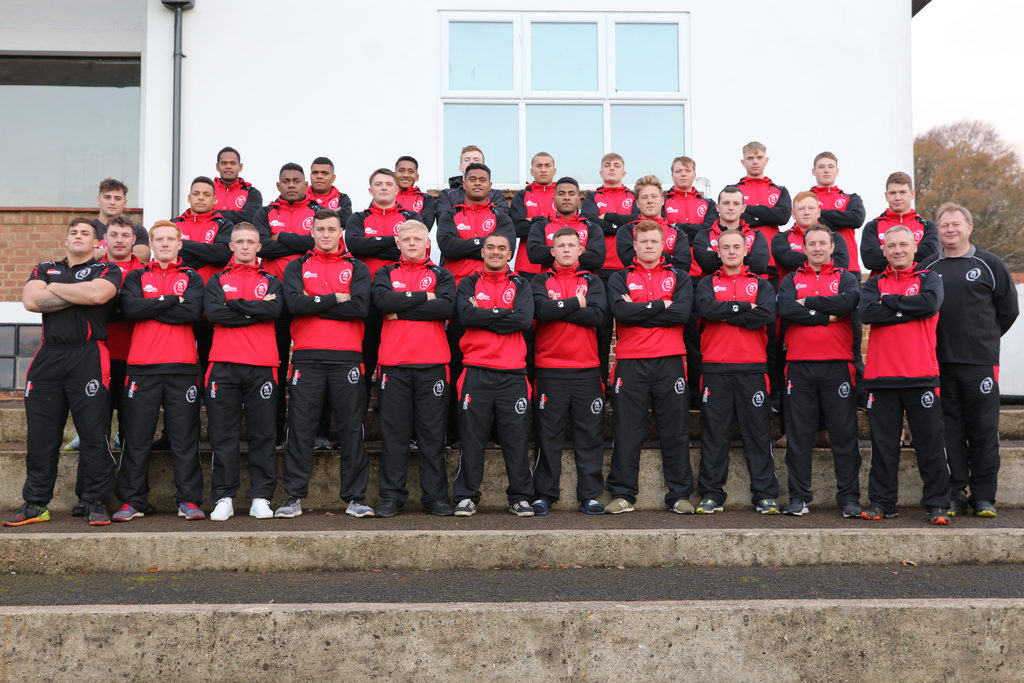