By Kimberley FowkeMay 30, 2022No Comments

Thursday 26 May 2022 saw the final phase of the Inter Services campaign for the British Army in Scotland squad.

Having got underway in late 2021, it had been a long road for the squad, with some flex to the personnel within it, largely due to operational deployments, exercises, courses and in some cases injuries.

With one eye on the Oriam Stadium on the Thursday, the players and management team assembled in Redford Barracks on Monday 23 May to begin what would be the last push of training. With a solid squad, the coaches Mikie Lawton and JR McCulloch took control of the backs and the forwards respectively, under the watchful eye of the DoR and Head Coach, Si Talbot.

As Thursday loomed into view, the players were ready, the management team confident they could do no more, the squad boarded the coaches to the Stadium.

The Oriam is an indoor 3G pitch inside a curved roofed arena, located within the campus of Heriot Watt University, and is equipped with excellent facilities, befitting an event such as this. With a RAF lead for the 2022 iteration, at 1200 the opening ceremony began, and a short time later the opening 40 minute (20 minute halves) match got underway between the RAF and RN. The Army were to play the loser of that match at 1345. 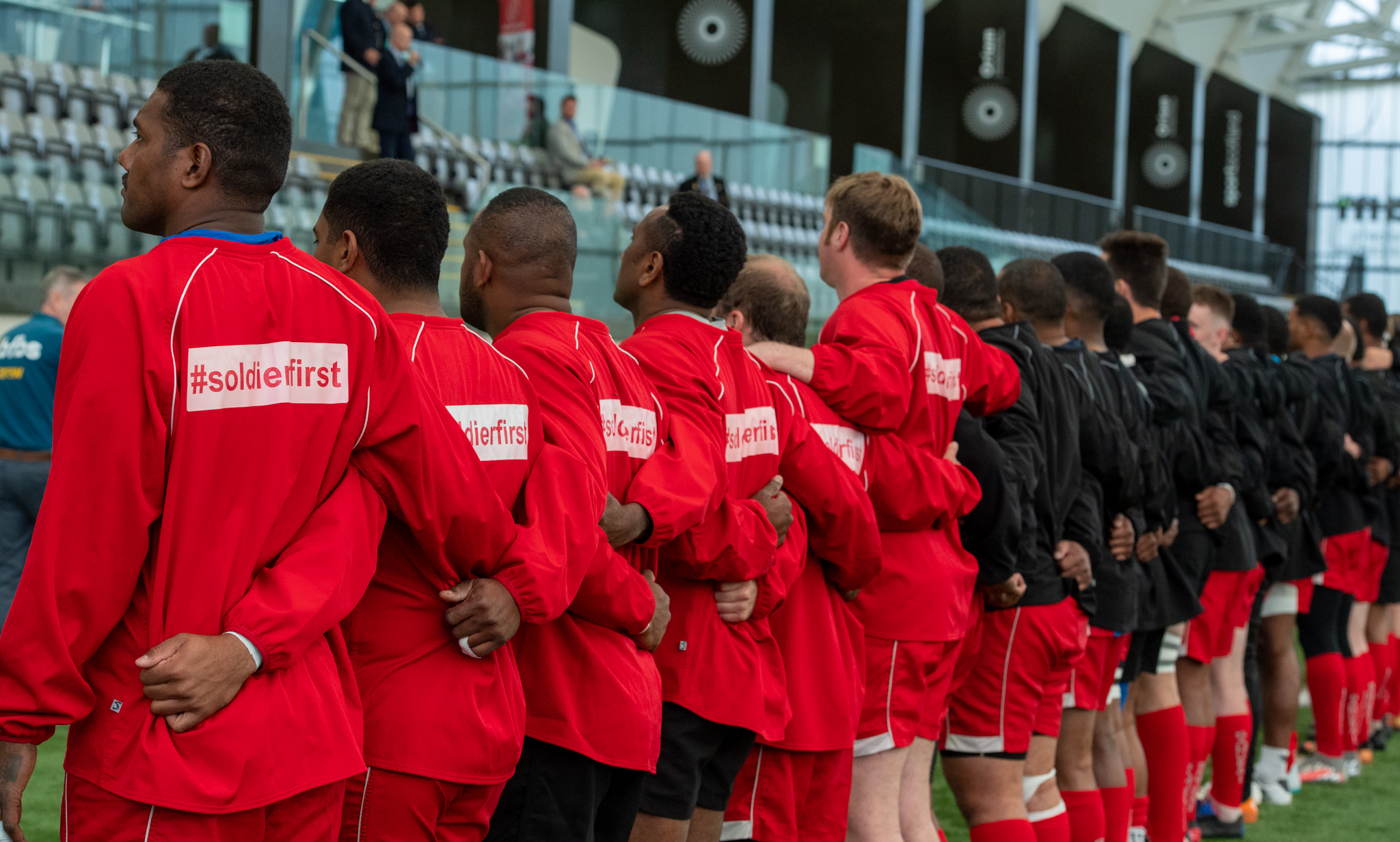 As the team made their way onto the pitch, they received the officials brief, and undertook the coin toss. Kick off was imminent.

Kicking to the RN, they received the ball and worked through some robust phases in midfield. A kick to touch saw the Army secure the lineout, efficiently deliver quick ball from forwards to backs and gaps appeared in the RN line, which having been quickly exploited, led to the first try.

With the scoreboard at 5 – 0 to the Army, the RN were quick to secure 3 points from a penalty. Drawing them closer. Following the re-start, the Army, having been patient to this point, began to work through phase after bruising phase, gaining both tactical and territorial advantage, and slicing open the RN defence which at times seemed powerless to stop them.

Despite an undeniably valiant effort from the men of the RN in Scotland, the Army ran in 6 tries, converting 3 of them, running out 36 – 3 as the winners. Round one; done. 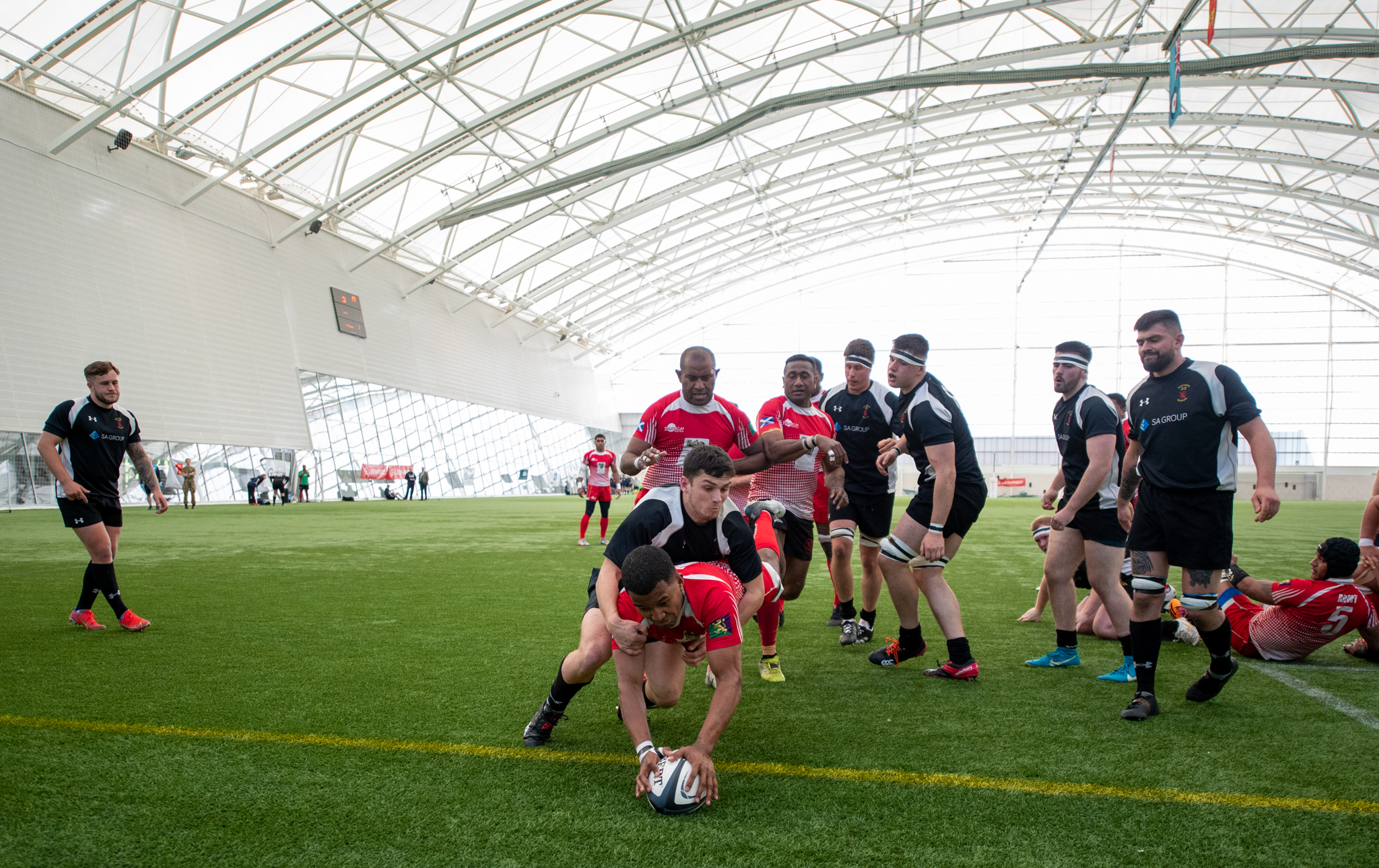 As a result of some injuries during the first match between the RAF and RN, there had been some injury time which had caused the timeline for the day to be compressed. This external factor could arguably be seen as an advantage, as between the full-time whistle being blown for the Army v Navy match, it was only a period of 12 minutes before the team were back in action versus the RAF; the winners of the first match of the tournament.

Having delivered a credible performance against the RN previously, the RAF had their tails up. They had come to play, and certainly demonstrated that in the early exchanges, quickly dominating the midfield, and gaining territorial advantage. A well-placed kick to the corner saw an Army lineout stolen, leading to both the loss of Army possession and an excellent attacking platform for the RAF. They didn’t waste the opportunity.

Having played the first quarter of the first half largely without the ball, as the game re-started, the Army were 0 – 5 down. Winning possession from the re-start saw the Army begin to build some phases; patience would be key. After a period of pressure, some interplay between forwards and backs, space opened, and with it, momentum shifted.

The Army drew next blood. A missed conversion, at close range saw the scores levelled, and at 5 – 5 it was the turn of the Army to retain some possession, as they quickly began to build a score through strong running from the forwards and skilful intervention from the backs.

As the final whistle drew ever closer, the Army had built a lead at 5 – 24, but the RAF mounted pressure in the Army 22, and continued to run hard into the Army defensive line. With seconds left on the clock, the ball was turned over, the Army Full Back kicked into space for the Left Wing to chase, and with a breakdown on halfway, all that was left was to win possession and kick to touch.

Having done the first job of getting to the breakdown and winning the ball, it came back on the Army side. A pass, badly timed volley, quickly re-gathered saw the final act of the match, the tournament and the 2022 Inter Services Scotland, as the Army put the ball into the stands to finish as Champions and join the other ARU Red Women and Men in the winner’s circle in 2022.