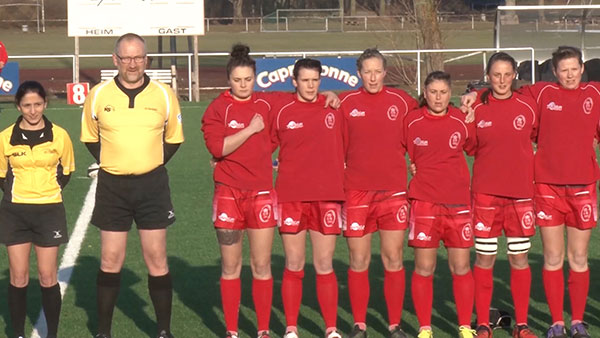 The Army Women’s Team travelled to a very cold Heidelberg to take on a resurgent German National Side. For the past 8 years Germany have been concentrating on the 7-a-side version of the game and have not fielded a XVs team until this year. This would be their second game of the season and they were confident going into the game.
Despite the cold, the 3G pitch at the Heidelberg Rugby Club and a bright sunny day promised for a fast, open game. The Army were without some of their most senior players, with Skipper, Capt Gemma Rowland on international duties with Wales; and Vice-Skipper and England Capped Prop Sgt Bianca Dawson committed to a family event, it meant that Sgt Rae Metters, earning her 26th cap took over the captain’s duties.
From the kick off the Army were put under pressure by a very big German pack. The first two scrums indicated it was going to be a long day at the office for the Army front row. The Army rallied and seemed to sort out the set piece by the third scrum and were able to win quick ball for fly half, Lt Kate Hancock RE, who put centre Cpl Carrie Roberts REME into a gap on half way, allowing to her to break through the defence, beat the cover tacklers for pace and score just right of the posts. Roberts converted her own try to make the score 0 – 7 after 3 minutes. 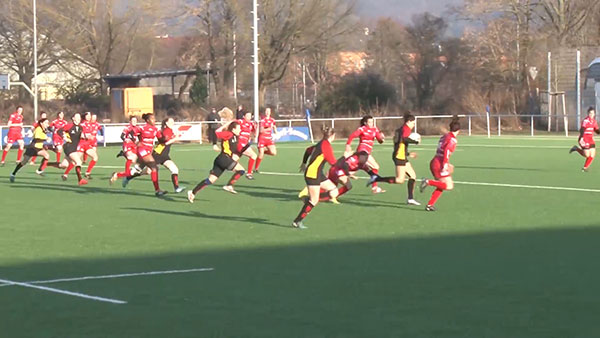 From the re-start the Army defence was ragged and disorganised and the German side regained the upper hand. On 5 minutes, a miscommunication in the Army centres, created a gap for the German outside centre, who plays her rugby with the successful Barcelona side in Spain, to use her considerable pace to go over in the corner. The try was not converted. 5 – 7.
Uncharacteristically, the Army lost shape and deviated from the game plan. They were not clinical enough, ignoring obvious overlaps in attack and consistently knocking the ball on amongst other unforced errors. On 18 minutes, after a German kick to touch, the Army attempted a quick line out, which didn’t go to hand. Germany reacted fastest and exploited an obvious mismatch allowing their outside centre to once again use her pace to go around the Army defence and cross the white wash. 7 – 10. 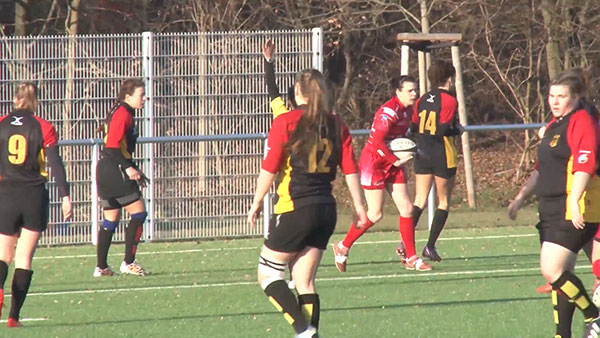 From the restart the Army were immediately held in their own half and infringed at the ruck. Germany elected to kick the penalty, which was successful. 13 – 7.
This seemed to shock the Army and a hint of ARU(W) “Normal Service” was resumed. The Army started playing in a more organised fashion and were able to create a period of sustained pressure in the German half. After 26 minutes the German defence were sucked in, allowing the Army backs to go wide and give the ball to Bdr Bethan Dainton RA in space on the wing. The internationally capped winger did not need to be asked twice; and used her blistering pace to score. The try was not converted. 13 – 12.
From the restart the Army continued to dominate, but the German defence remained up to the task. It took a further 13 minutes for the Army to capitalise on the constant pressure. On 39 minutes the Army released their backs and quick hands saw Roberts cross for her second try. She once again converted her own score. 13 – 19 at half time. 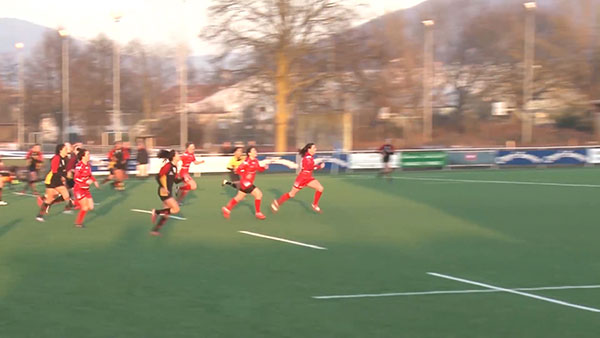 The second half started in disastrous fashion from the Army. From the kick off the Army failed to gather ball, allowing the Germans to hack through all the way to the in goal area and be first to apply the requisite downward pressure. The conversion was good. 20 – 19.
The Army quickly regained their shape and composure, forcing their way into the German 22. Quick ball and change of direction in attack allowed blindside, Capt Erica Mills RA to crash over in the corner. 20 – 24.
The Army very much had the better of the second half, although the German defence held strong until the 65th minute when once again the forwards created space for the backs to release Dainton to score her second try. 20 – 29.

Down to 14 due to a yellow card, the Army defended with passion, until at the death the Germans exploited the extra man, going wide and scoring in the corner. 25 -29.
This was the final score in what had been a tough game for both sides. The Army did not play their best rugby, but the commitment and effort could not be denied and overall they deserved the victory.
Pte Ellie Gattlin RLC was awarded the Forward of the match, with Roberts getting the award for the backs.
Congratulations to four Army players earning their first army caps: Lt Johanna Szczyglowska RE (Scrabble to her friends), Lt Nia Watson-Campbell RA, LCpl Emily White AGC(RMP) and Pte Abby Bull RLC. 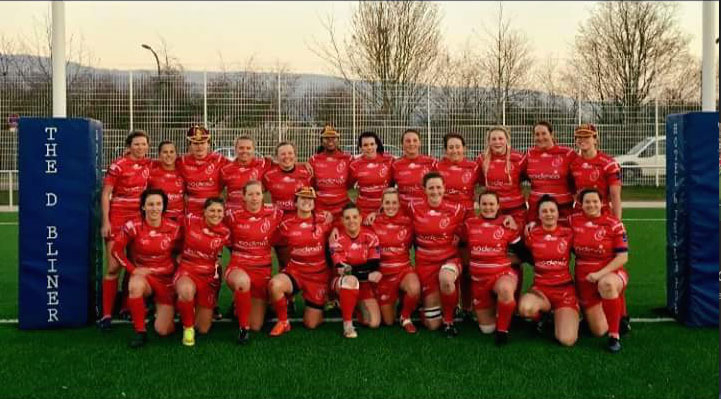 There is no doubt that Germany will improve game on game and will soon be a genuine force to be reckoned with in European International Rugby.This was a testing game for the Army Women against a fully committed and capable German team who are on the up. Both sides will benefit from the experience: Germany with their next fixture against Belgium and the Army with their final two warm up games before the Inter Services.
The game was filmed by BFBS for Forces TV and the television match report can be seen at:
http://forces.tv/56730084