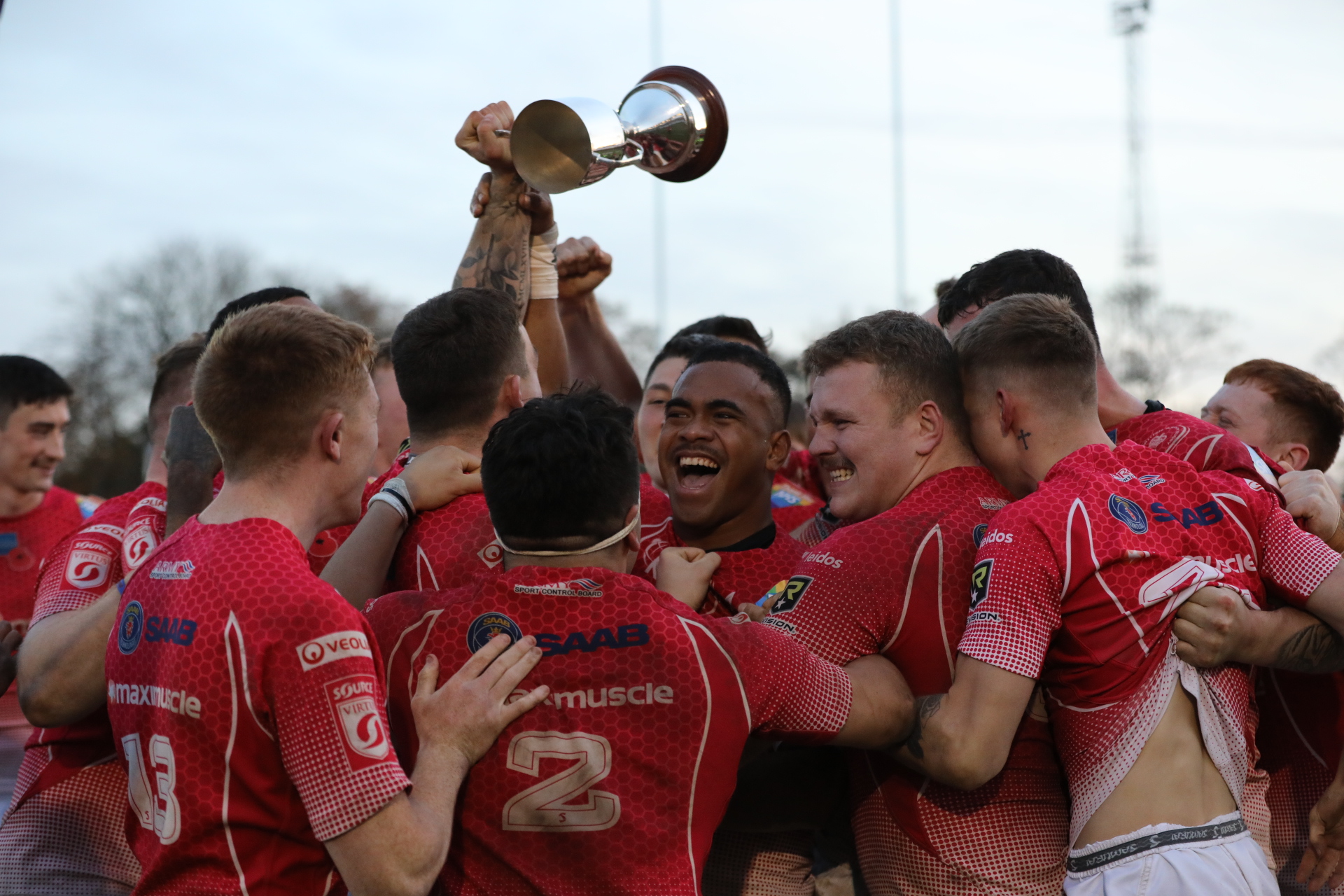 The Army Under-23s won the 2021 Inter-Services Championship with the latest of late scores which raised the roof at the home of the red shirts.

Three times they came back from double-digit deficits to overcome an RAF squad which more than played its part but ultimately ran out of steam as the contest reached its crucial stages. 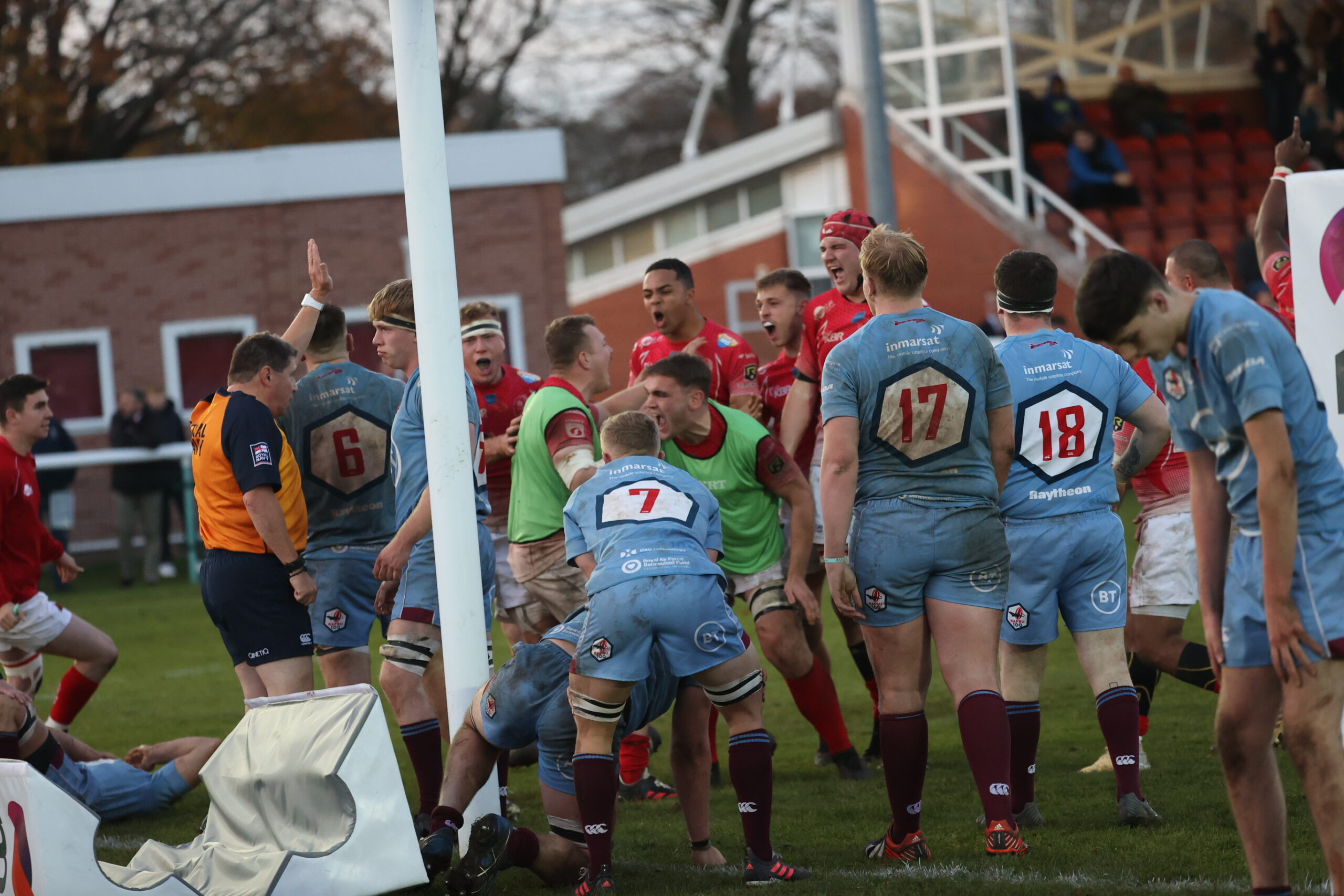 Both teams made the most of perfect late autumn conditions in Aldershot, keeping the error count low and the ambition high throughout a competitive match in which the balance of play swung one way then the other.

The Army opened the scoring, Spr Johnson (RE) on target from the 10-metre line after the RAF had been marched back 20 metres with two consecutive penalties.

Immediately the home team was in another fantastic position with several phases of possession on or around the RAF’s 22. But the blue line was both aggressive and resolute, forcing the Army back some 20 metres and into another shot at goal when a penalty was awarded for a breakdown infringement.

This time Spr Johnson’s attempt shaved the outside of the right-hand post, and when another penalty was awarded as the Army ran play back from the drop-out this time the ball was sent to touch.

Play came quickly off the top, but the RAF was alert to the challenge, and despite Tpr Roper (QDG) breaking through a double tackle and the RAF being two players short following a collision in back play once again the visitors held, clearing their line thanks to a penalty awarded for a dangerous tackle.

This all meant that the Army had not got the rewards their dominance of the opening quarter had deserved, and when SAC Jones landed a pair of straightforward attempts at goal either side of the 20-minute mark the RAF were 6-3 to the good. 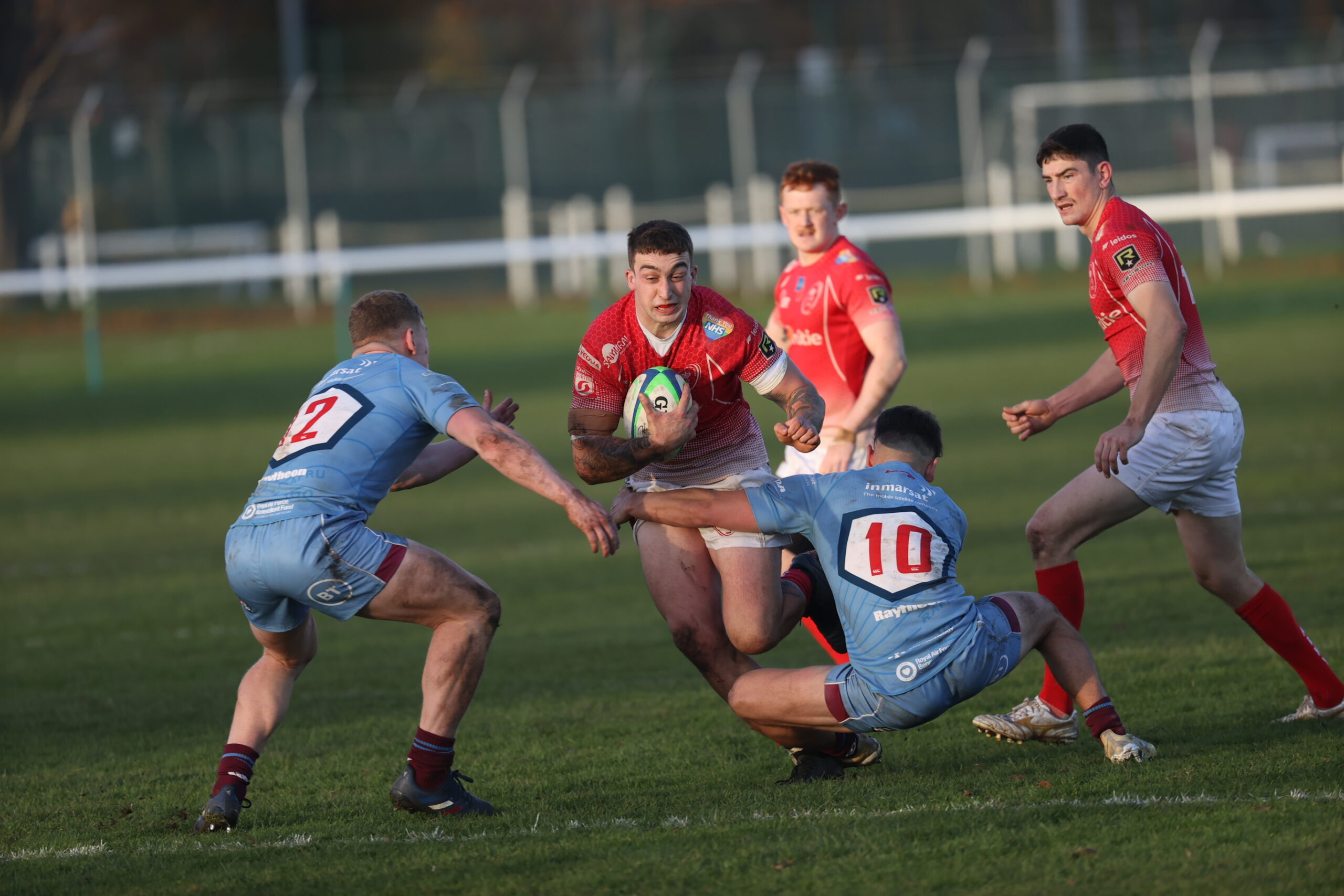 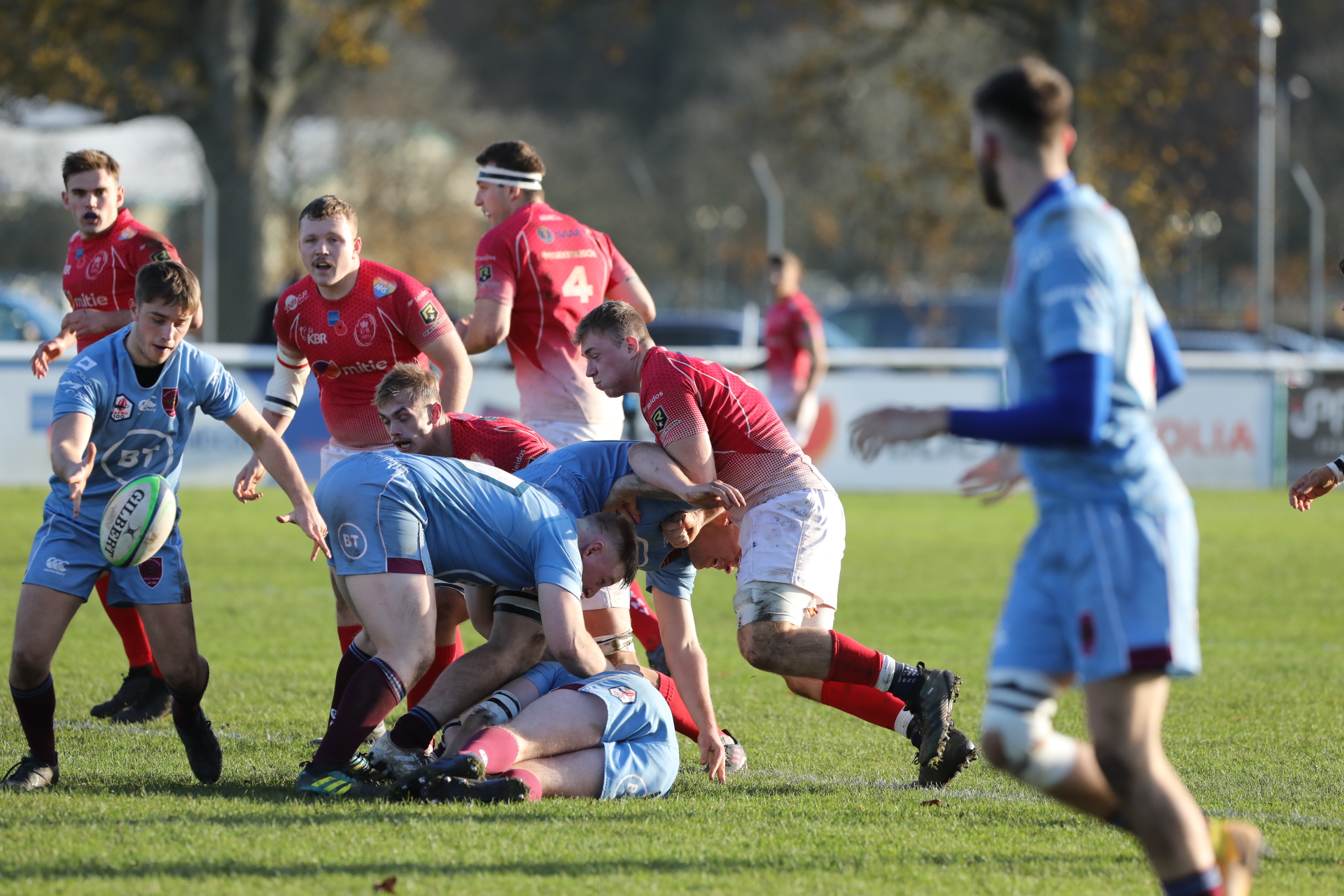 The second of these was compounded by the home forwards getting in front of the kicker at the restart, a mistake punished by a breakaway try from centre Cpl Lamont.

The momentum shift was palpable, but while the Army had not been able to break the RAF down in the opening quarter the visitors were getting five-pointers at the other end, a second try increasing their lead to 16-3 just after the half-hour.

The Army needed a score quickly, and this is just what they got five minutes from the break, Pte Wolfenden (R Anglian) stepping inside the final defender to dive over in the right corner. This rounded off some nice pressure from the red shirts, the pack setting up a strong drive on the left and repeated phases coming close to the whitewash.

A great finish was made all the better by an outstanding touchline conversion which brought the deficit back to within a score. 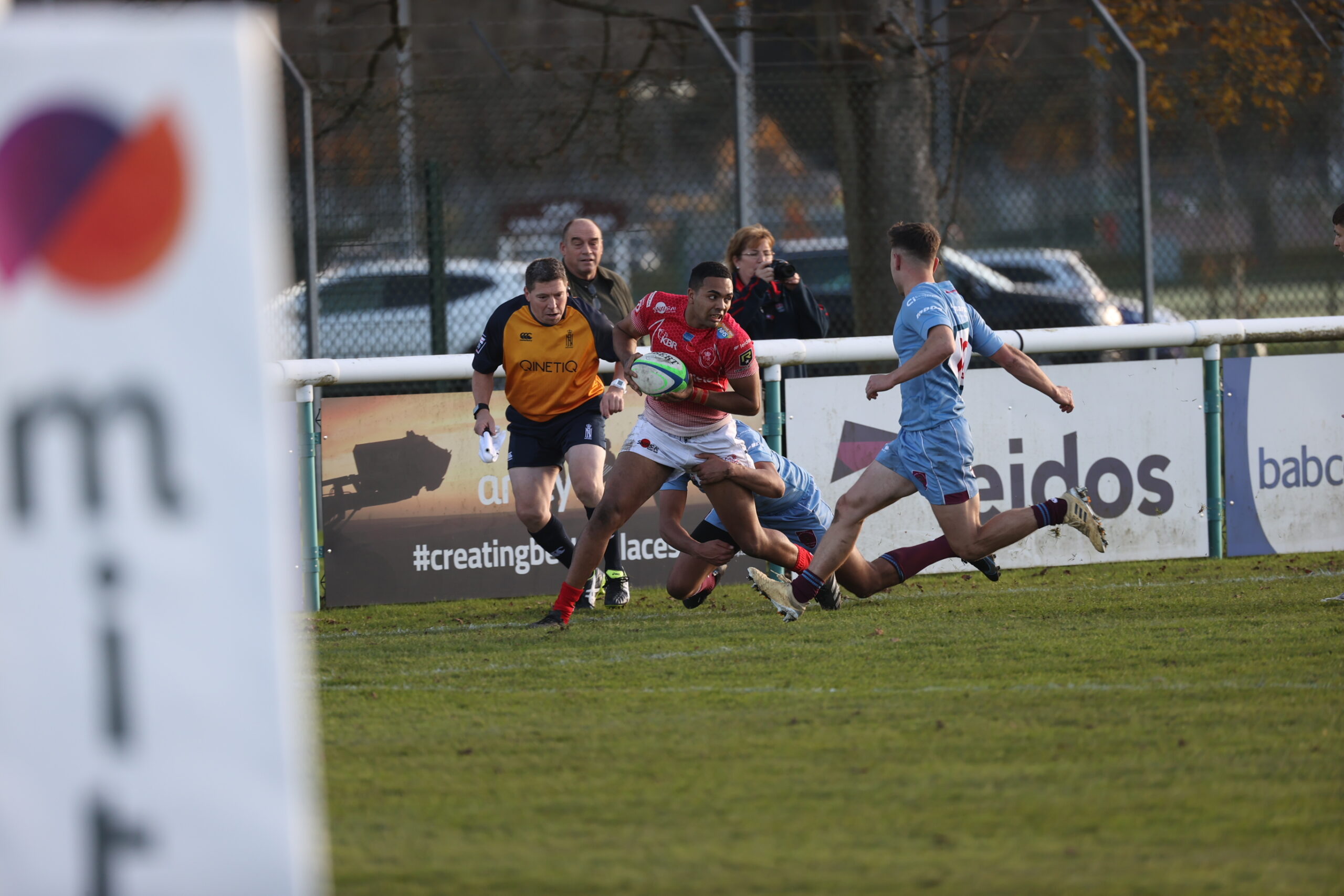 Unfortunately, the Army were not able to see out the remainder of the half, some overplaying in their own 22 ending in a fumble, a turnover, and eventually a third try from the RAF which brought the whistle.

SAC Irwin had gone over from close range, SAC Jones adding the extras, and the teams headed into the sheds with the RAF leading 23-10.

The RAF had done nothing complicated to get their points in the first half, sending individual runners around the fringes to make their metres. But it was a stunning long-range solo effort from Spr Johnson which got the first points of the second, the Army’s fly half collecting his own grubber, holding the defence with a pair of dummies, and outstripping three players with his pace to the whitewash. 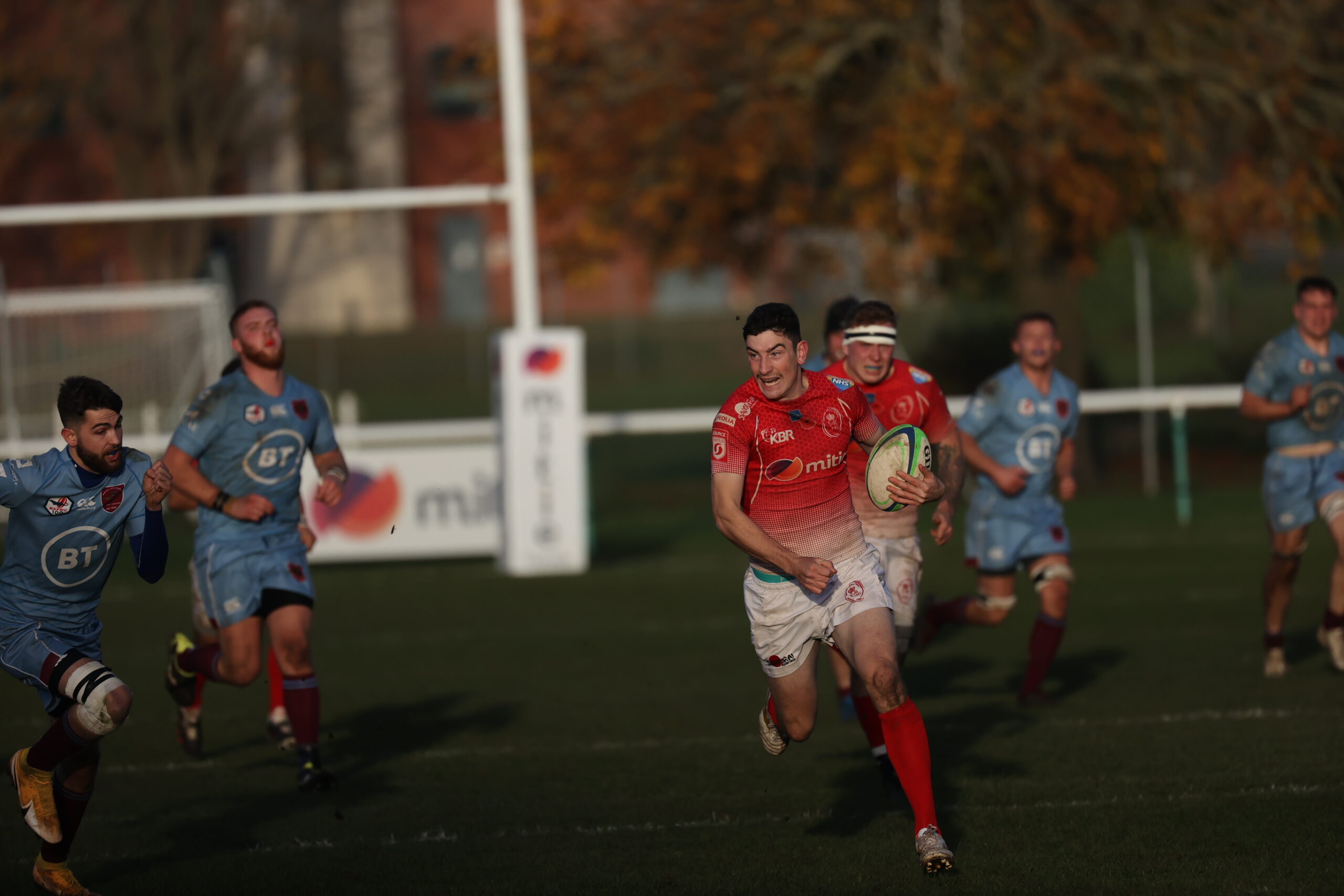 Spr Johnson then collected himself to kick the conversion and was given even more time to catch his breath thanks to a few minutes’ stoppage for the referee to receive some running repairs.

However, this break in play also took wind out of the Army’s sails, and they were unable to maintain their flow, coughing up the ball with a breakdown turnover and an overthrown lineout.

Camped in the home half, the RAF turned position into points through SAC Jones’s try, something which remained agonisingly out of reach for the Army as the hour approached.

Interplay down the left wing and nice breaks from replacements Rfn Needham (Rifles) and Hldr Raivalu (Scots) piled on the pressure, and repeated phases on the RAF line brought a penalty. But the visitors’ defence was as solid as it had been in the first half, and when they were let off as Pte Wolfenden could not hold onto Spr Johnson’s chip in the in-goal area you sensed another significant moment had been and gone. 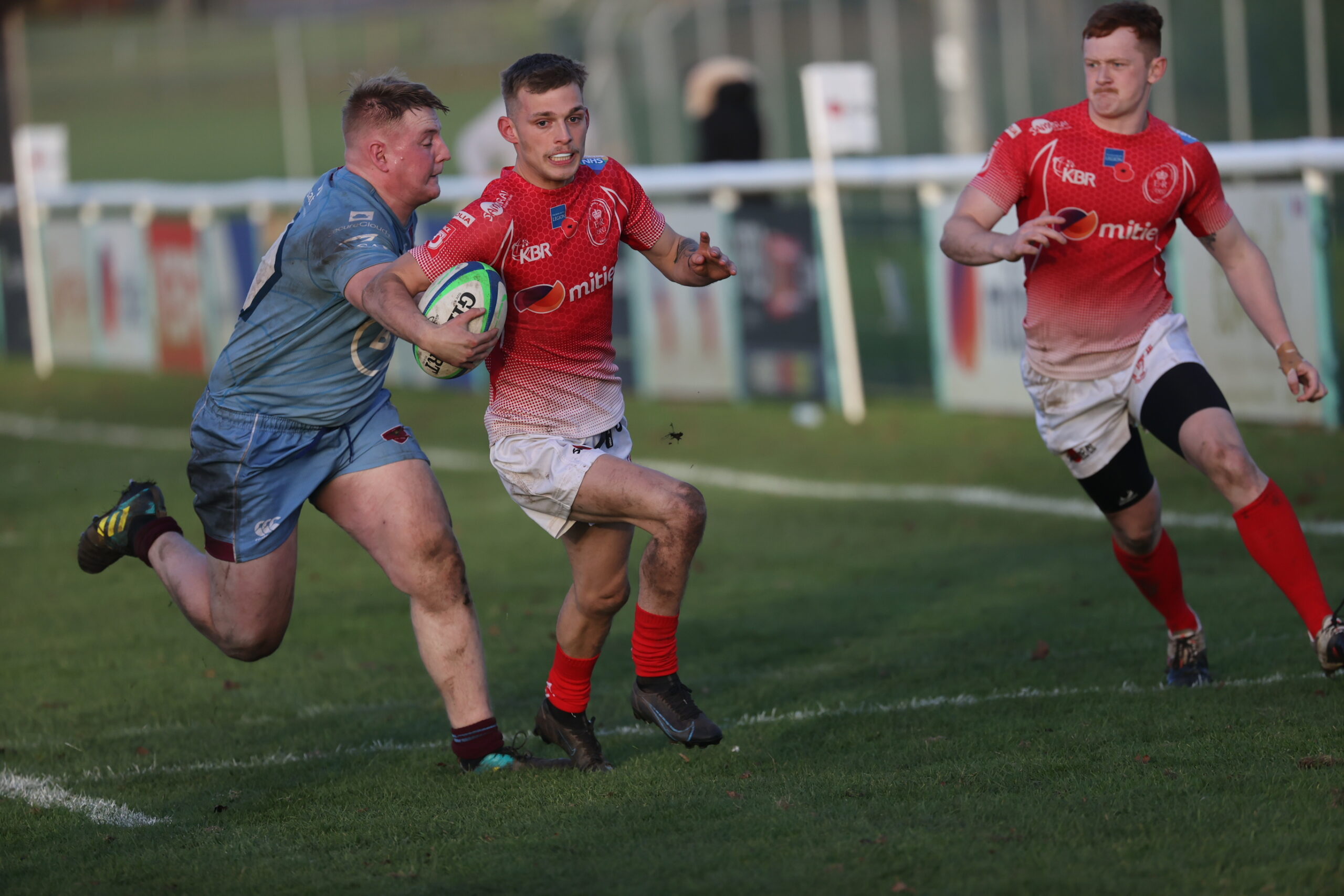 There was another in the opposite corner half-a-dozen minutes into the final quarter when a RAF try-saving tackle became a penalty for holding on, but when the line was finally breached by Hldr Sevakasiga (Scots) for a converted try the Army was back to a four-point deficit with a handful of minutes to play.

With the tension ratcheting up with every passing minute it seemed as though it was only a matter of time before the Army would get that clinching score as the RAF conceded repeated penalties and Spr Johnson kicked deep into the 22.

The catch-and-drive was exactly what was wanted, but somehow the RAF managed to get under the ball and earn themselves a goal line drop-out. But this sailed directly into touch, giving the Army a five-metre scrum.

Needing one final effort the RAF countered, but the scrum conceded a penalty, and this time the Army did what they had to do, Fus Bolton (R Welsh) the man to come up with the ball and the plaudits.