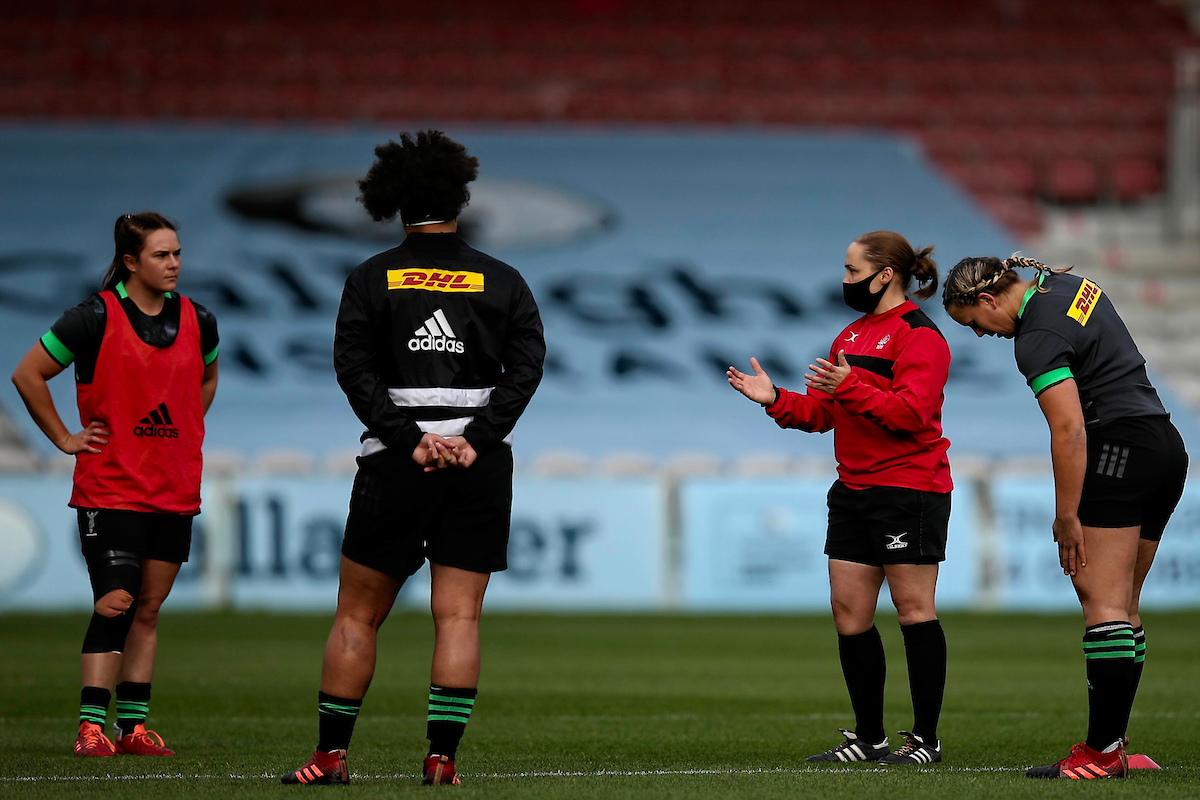 O’Donnell happy to be back in the middle

Capt Nikki O’Donnell says that she is enjoying life back with the whistle in hand each weekend.

Capt O’Donnell (QARANC) has been in regular action over the past month, refereeing in the Allianz Premier 15s and then as an assistant referee for Ireland’s clash with Italy in the Women’s Six Nations last Saturday.

This weekend she was scheduled to be back in Dublin to take charge of Ireland versus France, a match which has been postponed due to an outbreak of Covid-19 in the French camp. Despite this disappointment, Capt O’Donnell says that it is a positive just to be back on the field in the first place.

“Nobody was sure whether we’d get any rugby, so getting back onto the field with the Allianz Premier 15s has been great,” she says.

A return to the middle has also meant a bit of extra learning. That is because the domestic game has been adapted to take Covid-19 precautions into account through a number of variations which have reduced the number of scrums and mauls, thereby mitigating the potential risks faced by players.

Having those two rounds of matches under her belt have been important in regaining the sharpness needed at international level that could have dulled during the time away from the middle. In this regard match officials are no different to players and coaches, and Capt O’Donnell says that it has been important for all three sets of individuals to have been working together positively for the good of the sport overall.

“It’s massively helped,” she says. “I’ve made errors in the first two games in the Allianz Premier 15s that I wouldn’t have made prior to the break. We have honest chats with the players and we all know that they’ll get things wrong and we’ll get things wrong.

“The new variations mean that we’ve got a lot mentally to try and work out, such as when it’s a free kick or a scrum in certain aspects of the game. For example, a player was offside at a kick, which in normal circumstances is a penalty or a scrum, but I was asking myself whether it would be a free kick instead of the scrum.

“But it’s OK to make mistakes as long as you learn from it, develop and move on. We have an open and honest group and the referees involved in the Allianz Premier 15s are doing very similar sessions to the professional referees, with weekly reviews as a group.

“We review our own matches and then share our learning with the group on a Zoom call. Everyone has been away from rugby for a little while so it’s what we can do for shared learnings while we wait for more games to happen on the pitch.” 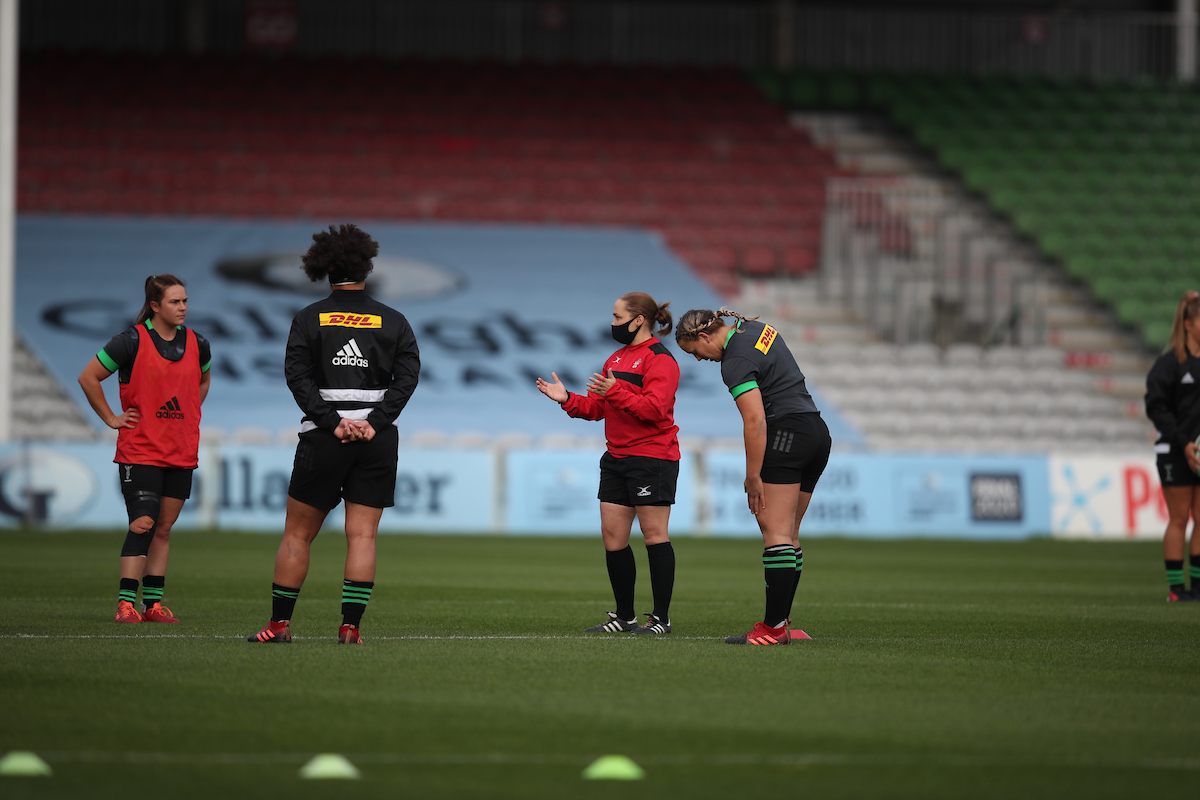 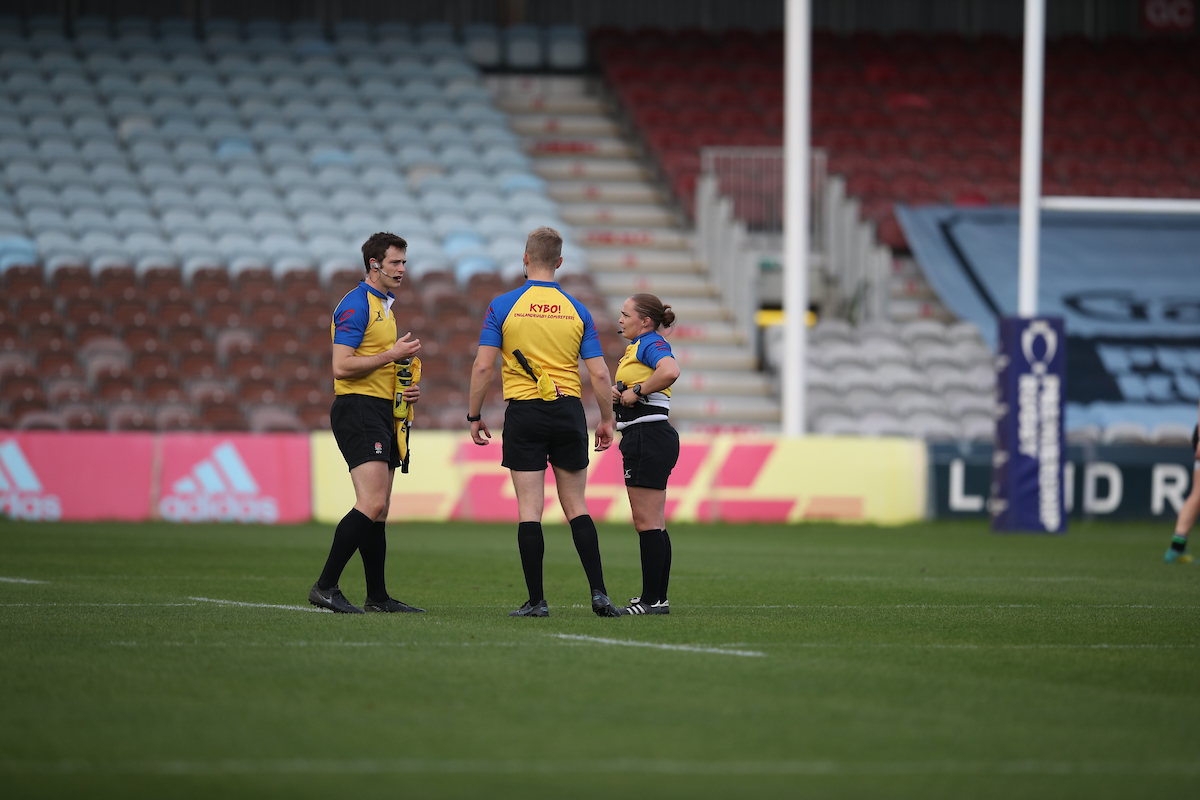 Capt O’Donnell pays tribute to the way that the RFU and local referee societies have worked hard to keep match officials connected and engaged throughout the last few months, whether through webinars for continuing professional development, guest interviews and quizzes.

And she also says that the variations have had a significant impact on the way that the Allianz Premier 15s matches have been played and officiated.

“I do recall the first scrum after 40 minutes in the Harlequins v DMP game brought a cheer from the players!” she says.

“The game is a lot quicker. The average breakdown in my first game was 2.48 seconds, and credit for that goes to the players and coaches for buying into things. If you look at the breakdown the law hasn’t changed, it’s just being applied a bit more rigidly.

“The fact that it’s already happened in the professional game and the players have seen what we want, and myself and some of the referees went into work with the Allianz Premier 15s  teams in their training sessions in the build-up to the league season starting to answer questions, provide clarity and build some habits.

“The game is changing for a positive. There’s a massive increase in ball-in-play time. There are fewer scrums, the breakdown is clearer, the ball is kept moving and the players have the opportunity to attack at pace and with space.

“So the teams have to think creatively because there are fewer times when you have 16 players in one area at a scrum which creates space at an attacking platform. So now they’re looking at what they can do at a free kick as a different type of set piece. It’s a different tactical challenge and we’ll see how that develops as the weeks go on.”

A lot of work was done behind the scenes to help maintain some of the structure to the play which might otherwise have been lost due to the swapping of free kicks to scrums, with referees making conscious efforts to giving realistic opportunities for the defence to be in a suitable position and managing the tempo of those restarts accordingly.

“If you get a free kick at a lineout or at a scrum the players get to play quickly and that’s a challenge for them, working out when they can go quickly, and then using our management to slow things down,” Capt O’Donnell says. “Speaking to quite a few of the players afterwards they’re quite relieved we’re doing that, because they don’t think they could go hell-for-leather for 70 minutes if they allowed their back rowers and scrum-halves to tap quickly all the time!”

Female officials are becoming an increasingly common sight at the top level of rugby, whether for men’s or women’s matches, and Capt O’Donnell says that this can only be a good thing for ambitious match officials, regardless of gender.

“Joy, Sara, Holly, all the women in the professional arena are doing fantastically well. As with other campaigns you can only be what you can see, and there’s a generation of players who have come through with people having knocked down the door to make women’s rugby more known.

“It’s an opportunity for someone to be a professional within rugby, not just as a player or coach, but as a match official, whether in the 15s game or Sevens travelling the world. It’s normalising things, and instead of being ‘oh, it’s a female referee’ it’s now just Joy or Sara refereeing, which is nice to see.” 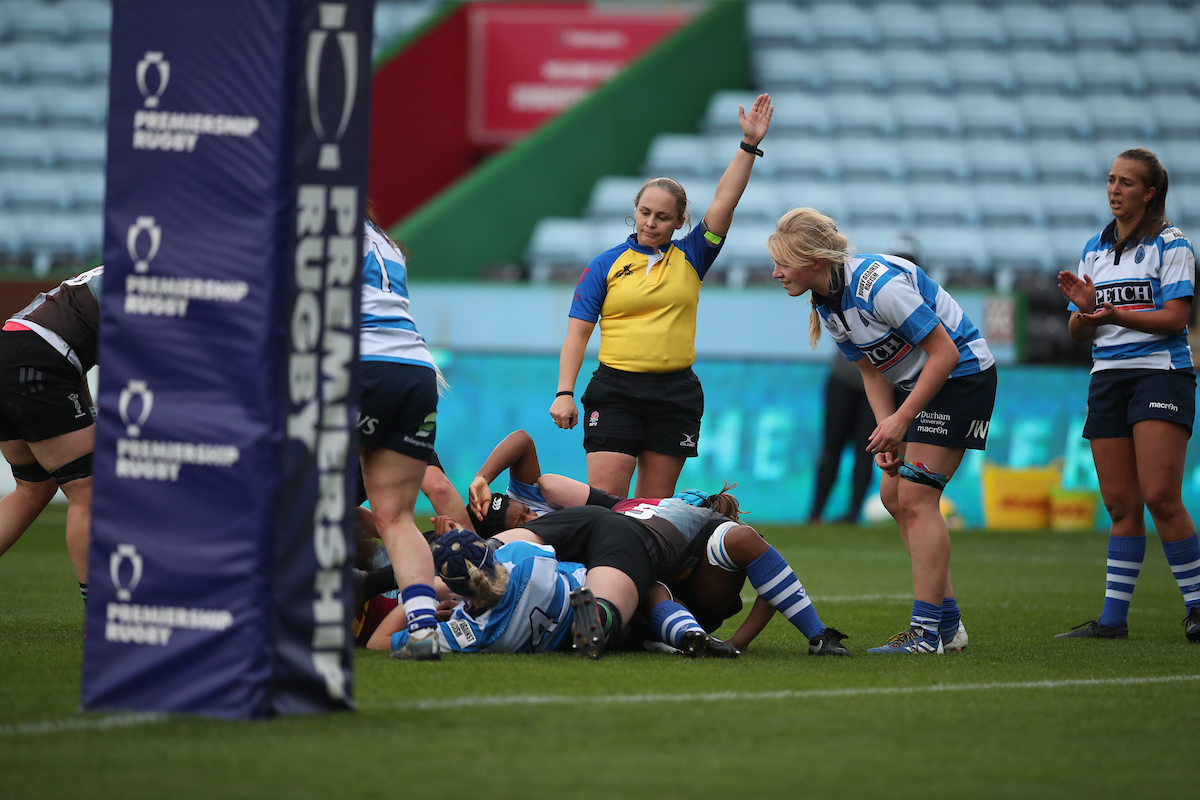 But whereas those professional referees may have been finding it hard to fill their time there has been no such challenge for Capt O’Donnell, who has been embedded within the NHS working in acute care throughout the pandemic.

“Rugby is something I do at the weekends and time off,” she says. “I’m fortunate to have a job which gives me that kind of flexibility and my chain of command is really supportive. The challenge for me was what to do at weekends! Fortunately I’ve got a springer spaniel who has kept me very active with lots of walks!

“I’m embedded within the NHS working in acute medicine alongside my NHS colleagues. The flexibility and resilience of the military and NHS as things progressed, nurses have been upskilling, moving out of their area of speciality to work in a higher-dependency area and support the speciality-trained people and provide that extra support to make sure patients have the right level of care.

“You’ve got nurses who work in the community or work in a niche area, who are now working on the wards and in ITU, environments they probably never saw themselves working in. That’s credit to every individual in there, whether they are cleaners, nurses and doctors, ward clerks, the entire team. It’s seen a massive cohesion of people doing something for the benefit of everyone else and sometimes to the detriment of themselves, and that’s testament to the whole NHS and the medical provision we’ve got in the UK, and we’re lucky to have that.”

There is just the one Army Women’s Senior XV player in action this weekend, with Capt Gemma Rowland (Royal Artillery) on the Wasps bench for their trip to Bristol.