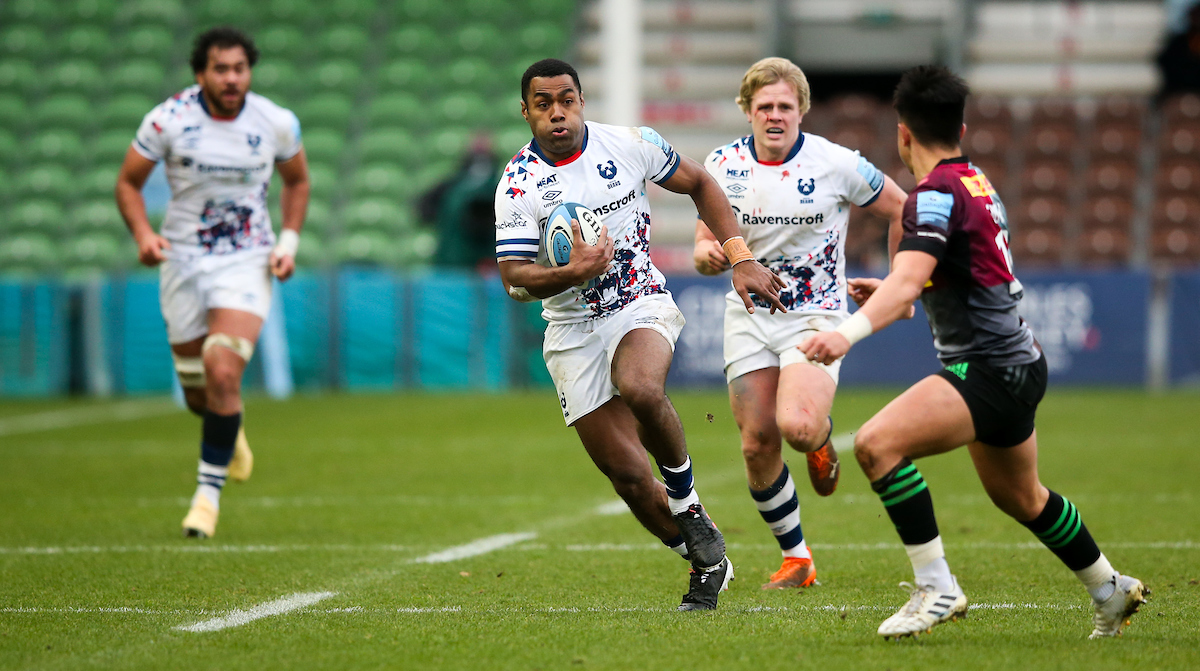 Top of the table action for Army representatives

There is top of the table action for Army representatives in both the Premiership and Premier 15s this weekend.

On Saturday afternoon Pte Ratu ‘Siva’ Naulago (Yorks) will line up on the wing for Bristol as they host Harlequins at Ashton Gate.

Bristol sit in first place in the Premiership table, with a run of four consecutive league wins and six matches in all competitions. Pte Naulago has been one of the stand-out performers in that sequence, his 693 metres in the top 10 of the entire competition, and he has six tries in his last five league matches.

But Bristol will have a stiff challenge in the form of a Harlequins team which has been in red-hot form since losing to the Bears back in November, with six wins from their last nine matches that have propelled them well into top four contention.

“This weekend we’ve got to be on our game,” says Bristol head coach, Pat Lam. “Quins are flying, they’ve got a lot of confidence. We know what we’re up against and it will be a cracker of a game.”

Harlequins Women also have a top-of-the-table clash on Saturday, the second-placed Quins heading around the North Circular Road to Saracens.

Harlequins have shrugged off their two-game blip in February to go on a four-match unbeaten sequence that has them sitting only behind Saracens in the table, although a win is needed at the StoneX Stadium if Quins are going to keep up hopes of finishing top come the play-offs.

“There’s bound to be some more excitement playing Saracens,” coach Mullen comments, “but we’ve been focussed on our own game and are determined to continue to build towards the play-offs.”

Kick off for this game is 14:00 with live streaming via www.Premier15s.com

Bdr Dainton’s international colleague, Capt Gemma Rowland (Royal Artillery) is also on the bench this weekend, as her Bristol Bears team makes the short trip up the M5 to Worcester on Sunday.

The Bears have been on the receiving end of three tough results but welcome back a number of key players from injury to face the Warriors. Kick off at Sixways is 13:45 with coverage on YouTube.

SSgt Sarah Mitchelson (RLC) is another Army player on the bench as Wasps host Sale Sharks at Twyford Avenue on Saturday (KO 13:30), the home team seeking to cement a place in the top four with a win.

In the RFU Championship there are starts for two Army Senior forwards.

Cpl Lewis Bean (Rifles) retains his place in the Bedford Blues pack as they host Jersey Reds at Goldington Road on Saturday (KO 13:00). Bedford won their first home match a fortnight ago against Hartpury but lost at Cornish Pirates in Round 3, and director of rugby Mike Rayer has made seven changes to the team which lost at the Mennaye, Cpl Bean surviving the cut.

Gunner Senitiki Nayalo (7 Para RHA) makes his first start of the season as Coventry head to Lady Bay on Saturday (KO 17:30) to snap a two-game losing streak away to winless Nottingham. Coventry’s losses came against two of the Championship’s unbeaten teams, Doncaster and Ealing, but they showed in the second half at Castle Park and then the first half against the Trailfinders that they have the ability to dominate teams and have stated the aim to convert that into an 80-minute performance against Nottingham.

Both of these matches are being live streamed via www.championshiprugby.co.uk/live-streams